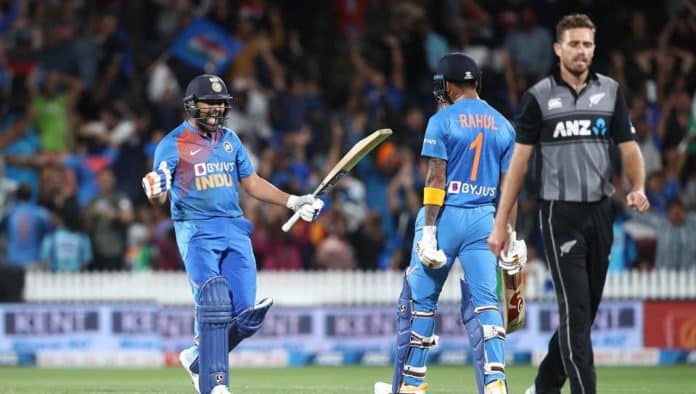 Hitman Rohit Sharma hit a brilliant unbeaten 15 (including two sixes) in the Super Over as India chased down New Zealand’s score of 17 to win the third T20I at Seddon Park and take an unassailable 3-0 lead in the five-match T20I series on Wednesday.

New Zealand skipper Kane Williamson followed up his excellent 95 with an unbeaten 11 in the Super Over, but it just wasn’t enough as Rohit and K.L. Rahul (5*) took Tim Southee to the cleaners.

This after the game was tied as India pacer Mohammed Shami came up with a classic last over just when it looked like Williamson would take the Kiwis home with a batting master-class.

It is for a reason that the Indian bowling attack is considered one of the best in the world and with Jasprit Bumrah having a one-off bad day, Shami rose to the challenge and bowled a brilliant last over as New Zealand failed to score the 9 runs required despite Ross Taylor starting the over with a six.

While Shami dismissed Williamson off the third ball of the over, he cleaned up Taylor (17) off the last ball with the Kiwis needing one run to win.

Earlier, Williamson single-handedly took the game away from the Indians in the 17th of the innings – Bumrah’s third. The Kiwi skipper picked 14 from the over to bring the required rate below the 10-run mark.

Going into the 17th, New Zealand needed 43 off 24 balls. But at the end of the over, the Kiwis needed 29 from the last three overs. With Ross Taylor giving Williamson company, it was all about not doing anything reckless for the hosts.

For the Indians, their failure to grab the opportunity with the bat was followed by some poor show on the field as even someone like Ravindra Jadeja dropped a catch, not to mention quite a few misfields.

Williamson took full advantage as he ensured that he not only held one end up, but also hit the timely boundaries to keep the hosts in the game. But him getting out with the Kiwis needing 2 runs brought the visitors right back in the game as Shami bowled a couple of dot balls before sending Taylor’s stumps for a walk in the park off the last ball.

Bennett (3/54) grabbed two wickets in three balls to remove Rohit, who slammed a 40-ball 65 including six fours and three sixes, and Shivam Dube (3) early on and then claimed the prized scalp of skipper Virat Kohli (38) in the 19th over as India never really got going after the initial flourish.

Manish Pandey’s 14-run cameo along with Ravindra Jadeja’s 10 off five helped India reach a defendable total in the end. This after the tourists were off to a blazing start with in-form K.L. Rahul and Rohit looking to take the Kiwi bowlers to the cleaners.

India raced to 69/0 in the first six overs of T20I and it looked like New Zealand’s ploy of asking India to bat first to blunt their strength of chasing would fall flat.

But Colin de Grandhomme’s first over of the series broke the 89-run stand as Rahul was caught at point by Colin Munro in the ninth over as he was undone by the extra bounce on offer.

All-rounder Shivam Dube was promoted up the order to No.3 to continue the onslaught but a double strike by Hamish Bennett in the 11th over meant both Rohit and Dube (3) were sent back in quick succession.

While Rohit holed out to Tim Southee at long on, Dube sliced a back of a length delivery to Ish Sodhi at third man.

Kohli took a bit of time to get going as the Kiwis held the upper hand before the Indian captain smashed a six and a four off Mitchell Santner in the 15th over which yielded 13 runs as India moved to 127/3.

Shreyas Iyer looked to heap more misery on Santner as he hit a six off his first ball in the 17th over, but the left-arm spinner had the last laugh on his home ground as he changed the pace to outsmart the batsman who was stumped by Tim Seifert.

Kohli tried to change gears but was caught at extra-cover by Southee off Bennett. India, though, made some ground in the final over as Pandey and Jadeja hit a six each to take 18 off Southee’s over.