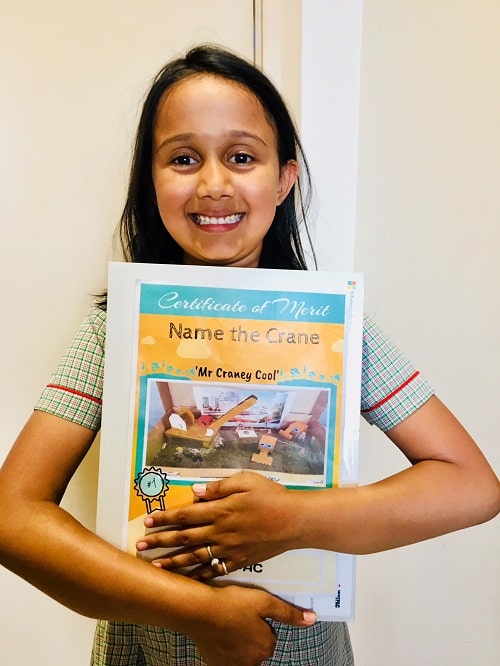 Children often surprise us with their creativity, diligence and sense of responsibility to do something from start to finish.
Little Vaani Saraf showed how it’s done recently when she won a competition to create a drawing or a model of a crane to reflect the construction in Parramatta. The competition, called Name The Crane, was organised by Parramatta Public School & Parramatta High School and sponsored by Watpac. Vaani was awarded a gleaming Windows Surface Pro laptop for her effort.
Vaani, just eight years old, competed with not only primary school students, but high school students as well. The competition was open to Parramatta Public School and Arthur Phillip High School in Sydney’s west. More than 500 entries were submitted in the competition.

“I was wondering how I could possibly compete with and beat students more than double my age,” Vaani said.
When she woke up every morning, she was often greeted by the sounds of the construction site near her apartment building. The cranes worked away, men yelled across the site and machinery disturbed the morning air. Thinking nothing of it, she got ready for school and made her way out of her home. In fact, Vaani’s school is also slated to be demolished to make way for a new campus.
One day, on her way to school, Vaani and Roopal dropped off the recycling and happened to find a big box. This turned out to be the germ of an idea. The big box, it turned out, prompted her to think outside the box!
As soon as she saw the box, Vaani realised she could build a whole construction site. Why settle for a drawing or a model of a lonesome, boring crane when she could create a whole site?
“She decided she could make something bigger, and she could stand out if she went beyond the guidelines,” Roopal said.
So, for the next 3-4 nights, Vaani made the model, with some help from mum. She cut out workers from a cardboard and went to the park to collect dirt for the project.
Once she finished building it, she realised the model was so big that she couldn’t show it to the judge, the school principal! The only way was to send photos and videos of the project to the principal. Losing hope and feeling that their chance of winning might be gone, Vaani asked her class teacher to send off the photos, and hoped that she could still succeed. She decided to name of her creation Mr Craney Cool.
Some days later, Vaani was in the school assembly, where there was a representative from Watpac, a construction and property development company.

The woman from Watpac came on stage and announced the winner of the crane competition: ‘Mr. Craney Cool’. “I sat there in shock for a minute, thinking ‘did I really win’? Then, I realised that ‘Mr. Craney Cool’ was my project and ran up to the stage to collect the prize,” Vaani said. Finally, she could hold the laptop in her arms.
What Vaani learnt from this experience was the importance of having a clear vision and working hard towards it, and not being afraid of those factors seemingly working against her. After all that effort, she succeeded and made her parents proud.