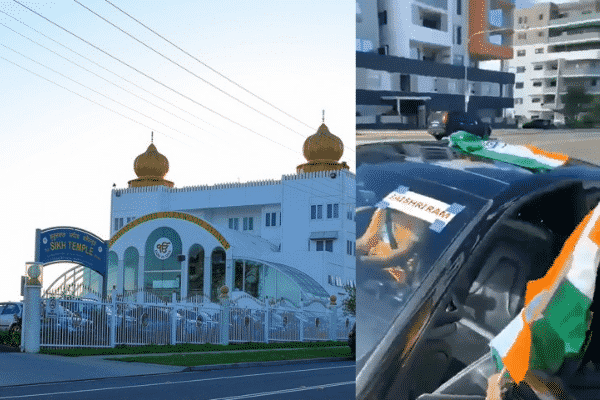 Tensions are strained in Sydney’s Indian community following a stand-off between a nationalist group and the Sikh community this past weekend. Citing “clear animosity” between the two groups, NSW Police halted a car rally, and a pro-farmers protest has now been scheduled for the coming week.

On Sunday 14 February, the Glenwood Gurdwara went on high alert after receiving a tip-off from NSW Police.

“(We) received a request to hold a car rally that was to proceed from Harris Park to Blacktown and to Quakers Hill… The rally was to celebrate ‘Arya Samaj'” Chief Inspector Adam Philips, Granville Police Station told Indian Link.

“Police are currently aware of tensions between the Sikh and Hindu communities,” he added. “The car rally, we believe, was simply going to aggravate the current situation between the two communities, which is why the rally was stopped”.

NSW Police had previously refused the rally organisers’ application to hold a public assembly, although they “provided some assistance” on the day.

In the video footage, cars can be seen adorned with the Indian national flag, and religious slogans can be heard in the background. Noting rising tensions, NSW Police stopped the convoy from proceeding further along Sunnyholt Road at the Vardy’s Road intersection, and the gurdwara was also notified.

Some Indian activists organised rally in support of farm laws in Sydney, Australia on Sunday. Songs were also played during this rally. @iepunjab @IndianExpress pic.twitter.com/Q36gtumAPU

Gurmeet Tuli was at the Glenwood Gurdwara that evening.

“There were some 500 people there, and the atmosphere was tense,” Tuli, the President of the Little India Business Forum, told Indian Link.

Earlier that afternoon, he had received a message from the Gurdwara asking members of the congregation to come in, because an apparent threat had been identified.

“At around 3 PM, NSW Police had conveyed to the gurdwara concerns of an imminent attack,” he said.

Two police cars followed the convoy, presumably to monitor (a regular police practice in such cases), and also contacted Riverstone Police, the local command area of the Glenwood Gurdwara.

“It was about 5.30 PM when the convoy was intercepted, and they were less than 5 km away from the Gurdwara. There were about 25 cars,” Tuli reported.

(Chief Inspector Philips, meanwhile, noted 50 cars in the rally, while numbers reported anecdotally have ranged from 10 cars to 25, even buses.)

NSW Police confirmed that no arrests have been made, police did not search for weapons, and the car rally made its way back to Harris Park. The police command centres in Blacktown, Quakers Hill, Cumberland, and Parramatta continue to assess the situation.

Although much of the protest was turned away, video footage has emerged of some agitated Sikh men confronting a member of the rally.

A saffron-clad man can be seen explaining the rally to the group. “Our Tiranga rally only had four cars. We had no intentions of going past the Gurdwara,” he explains in Punjabi before he is shouted down.

Altercations were also reported later that night in Harris Park. Miscreants allegedly drove through Wigram Street, smashing car windows. They were given chase by locals, after which they abandoned the car and escaped on foot. No one was hurt.

The car rally has now raised fears in the Sikh community of their safety. The Australian Sikh Association (ASA), the management body of the Glenwood Gurdwara, put out a statement shortly after the incident, noting Sikhs can be easily targeted “through their unique appearance in turbans and facial hair”.

Meanwhile, the religious divide is becoming obvious on online chat groups. One post claimed: “Sad to see how cleverly the Australian Sikh Association portrayed the peaceful car rally for the respect of the Indian flag (desecrated by Khalistanis on 26 Jan 2021) as an attempt of spreading violence… The Indian diaspora in Australia will not let Australia become the next mainland for Khalistanis as Canada has become now.”

Some media outlets, too, have described the rally members as “supporters of the Indian flag”, whatever that means.

Such ‘tiranga rallies’ have recently become popular among sections of the Indian diaspora. One was organised in Melbourne on 26 Jan this year. Typically they feature the Indian tricolour and sloganeering, including chants of ‘Jai Siya Ram’,  ‘Jai Shri Ram’, ‘Vande Mataram’ and ‘Bharat Mata Ki Jai’. While they claim to be patriotic, cloaked under the national flag, the religious undertones are obvious.

Although police records indicate this car rally was organised to to celebrate Arya Samaj, no group has come forward to claim responsibility. Speaking to Indian Link, Pundit Awindra Prasad, head of the Arya Samaj of Australia has claimed no involvement with the car rally.

“We’ve met with Hindi Council of Australia and the BJP, no one is claiming responsibility or even knowledge of who the miscreants were, or what their intentions were,” Gurmeet Tuli stated.

Prakash Mehta, President of the Hindu Council of Australia, expressed dismay at the incident.

“It is unimaginable that a Hindu group would do anything to disrupt the sanctity of any religious place. There has been a strong brotherhood between Hindus and Sikhs; we in Australia have marked Guru Nanak’s milestone birth anniversary recently. We condemn the recent incident if it is true that they set out to disrespect the Gurdwara. It is up to the Police now, and no one should take the law in their own hands,” he stated.

Much of the disagreement within the diaspora stems from the farmer protests in India, which are now well into their third month. It’s particularly struck a vein within the Sikh diaspora, many of whom hail from farming backgrounds.

“It is fine to say there should be no repercussions of what is happening in India,” Tuli explained.  “Many Sikhs here come from farming backgrounds and are hurting at the new laws and will raise their voice in solidarity. You cannot stop that.”

In the end, though, the laws of the land apply, and Tuli requests the community to remain calm.

“Have faith in Australian judicial system. We need to not be judgemental and keep in mind that everyone has a democratic right to express their views. We should adopt collaborative approach to larger, community-based issues, and no religion should be disrespected as a power game.”