A vox pop from among those attending the Blacktown event

500 people, many of them women, young children and senior citizens, braved the blazing sun and 35-degree heat to show their support for the Indian farmers in a protest organised by Sydney’s local Sikh community. Many hundreds were turned away from attending due to COVID 19 restrictions.

Amar Singh, one of the organisers said the rally was to speak out against human rights abuses in India – whether against farmers across the country, or against the freedom of press there.

Speaking to Indian Link, he said, “We heard from a number of speakers, Sydneysiders from various parts of India, as well as local politicians such as Greens MP David Shoebridge who spoke out against these human right abuses and in support of the farmers protest in India.”

Attendees of the peaceful Sikh community protest in Sydney, largely from Punjab, were concerned about the effect on farmers of contentious new farm laws passed by the Indian government last September.

Senior citizen Manmohan Singh Sekhon, who has been living in Sydney for over 20 years and is the former Vice president of Parklea Gurudwara, told Indian Link that all those gathered at Blacktown Showground on the day had deep links to the farming lands of Punjab.

“They are appalled at the heavy-handed way the Modi Government is trying to impose the new rules on farming, overriding state concerns and with no consultations with the farmers.”

This view was shared by Arvinder Singh, proprietor of Shahi Dining in Sydney.

“I have been living here for 16 years after coming here in 2005 to study cookery and hospitality. I know the sacrifices my father made in sending me here and doing all he could to give me a start. It is my duty now to support the farmers in India when they are being oppressed by the commercial aspirations of this government.”

Amar Singh also added to the deep connection which the local Sikh and Punjabi community has to the farmlands in India, with over 90% of the local Punjabis in Australia owning or being part of farming in India.

“It is important we raise this issue in an amicable way to show our support. After all, India is a democratic country and should applaud the way that people can raise these issues in an amicable way,” he said.

But does that raise a concern of internationalisation of local Indian politics in Australia and creating communal issues?

Amar Singh said, “People will get offended at any and everything these days, as there is a very narrow political process but we are willing to sit down with anyone to discuss these issues in Australia.”

Avinash and Simran, both young men in their 30s, had no issues with internationalising the Indian farmers’ agitation in Australia.

“Did not the whole world speak out for Black Lives Matter?” they asked. “Are ordinary citizens not speaking out against issues such as domestic violence, even if it does not affect them personally?” 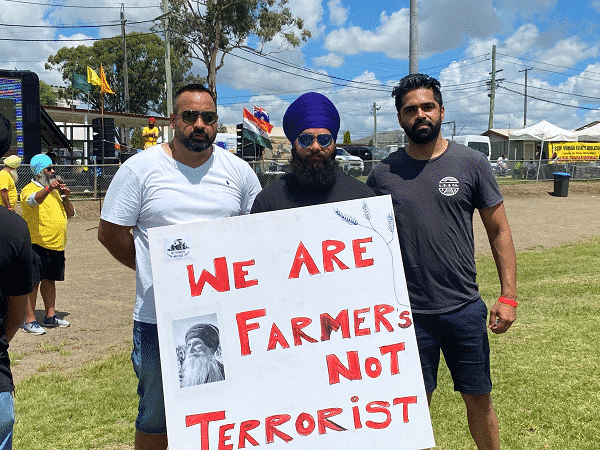 Arwinder Singh was particularly incensed at the allegations terming Sikhs as anti-nationals or terrorists. “Those making these allegations have no idea of who or what a true Indian national is. The Sikhs are less than 2% of the Indian population but they suffer from over 90% of causalities defending India. Almost every day, a dead body arrives in a village in Punjab from the borders of India where Punjabi soldiers, some as young as 21, have died for the Indian tiranga. We have honoured the Indian flag by our sacrifices more than any other community in India. And for those locally, who are accusing us of being anti India – we invite you to come and talk to us. Do not be andha bhakts; listen to us and understand what we are saying. We promise to listen to you, so we can understand your point of view.”

The local police from Blacktown LAC were at hand to ensure that all was peaceful and COVID-19 safe, with the protest concluding by the promised time of 3 pm.

Response to editorial complaint regarding article on car rally