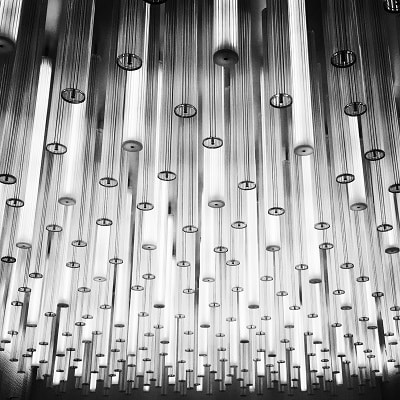 Reading Time: 4 minutesWalking down Martin Place in Sydney’s CBD, a particular light installation in a building foyer always caught Shyamal Bhatia’s eye. One lunch time, he aimed his iPhone 8 at it. As he did so, it occurred to him that the shot might look even better in black-and-white.

Weeks later, he picked this particular image from his collection to submit to an international photography competition. The Sydney-based hobby photographer is among the select few who will have his work showcased, alongside others from across the world, at the Art of Black & White exhibition at the Berlin Blue contemporary art gallery in Berlin next month.
“I’m quite proud of this shot,” Shyamal told Indian Link. “I loved it as soon as I saw it. The geometric pattern created by the vertical lines, as well as the play between light and shadow help to make it captivating. It came out exactly as I had envisaged.”


As a member of the international online community Guru Shots, a collective of photographers, Shyamal’s work is rated by peers, and a high ranking in a recent B-and-W competition ensured his work was picked for display. (In a series of regular competitions organised by this platform, submitted works are picked for display at major centres around the world.)
The chartered accountant-turned-IT professional now has a growing collection of urban and architectural photography, all taken during his daily lunch-time walk around the city.
Walking past some of Sydney’s most striking buildings such as 1 Bligh St, AMP Centre, ANZ Bank Centre, Aurora Place, Century Tower and Chifley Tower, Shyamal began to look at them with a fresh perspective. Their foyers caught his eye too.

“I saw the buildings in a particular light and thought about capturing them in black-and-white,” Shyamal offered. “Monuments are great subjects for monochrome photography, particularly in the afternoon light.”
They might be regular everyday sights to the casual observer, but it is clear that Shyamal sees much hidden beauty in them. These easily-missed details of daily city life turn the familiar and the ordinary into something striking and new.
As a photographer, Shyamal is constantly looking for curious sights as well as vantage points, and finds an endless source of stimuli on his daily walks around the city.

In the past eight months alone, he has collected hundreds of stunning images, although he claims with characteristic modesty that about 60 are worth putting into a coffee table book.
In fact, in a pet project, he has just created his first coffee table book for personal use, using online printing services. It takes pride of place in his living room.
There are stark silhouettes, graceful and rhythmic curves, and elegant arches in Shyamal’s images. And sometimes, a combination of all of these, introducing depth and variety.
Some shots are taken very close to the monument in order to magnify perspective and to draw the viewer in; in others, the photographer draws back instead.

Shyamal seems to be drawn to lines and angles, arches and curves, which help him to see his environment in a completely new light.
The endeavour has also helped him redefine his relationship with the city he has grown to love just as much as native Mumbai.
But why an iPhone? “It was convenient, I had it on hand, and it worked for me,” Shyamal replied. “The device has improved to such an extent that it produces reasonably good quality pics. Very little post production work goes into my photos: they are converted to B-and-W using the standard filter available on the iPhone itself. At best, I play around a little bit with contrast.”

Shyamal took up photography as a teenager. “My dad was an avid photographer. He gave me my first camera and the first pictures I took were at a cricket match. I caught some of the action in the middle, and also got some of the players’ portraits afterwards.”
Then, like every budding photographer in Mumbai, he did a whole study of the city’s famed ‘Queen’s necklace’ seafront.
He cites legendary American photographer Ansel Adams as his major influence.
“I also loved the B-and-W films of my childhood. Alfred Hitchcock, Guru Dutt and Bimal Roy were huge inspirations. B-and-W is a powerful medium. It is essentially a play between light and shadow. But you have to see things in B-and-W in order to get a good click!”
Follow Shyamal Bhatia on Instagram at @shyamalb12
- Advertisement -
Share
WhatsApp
Facebook
Twitter
Linkedin
Previous articleDiversity in media: all talk, no action?
Next articleWhatsApp battleground for India elections 2019