Soaking in the spirit of India’s freedom struggle 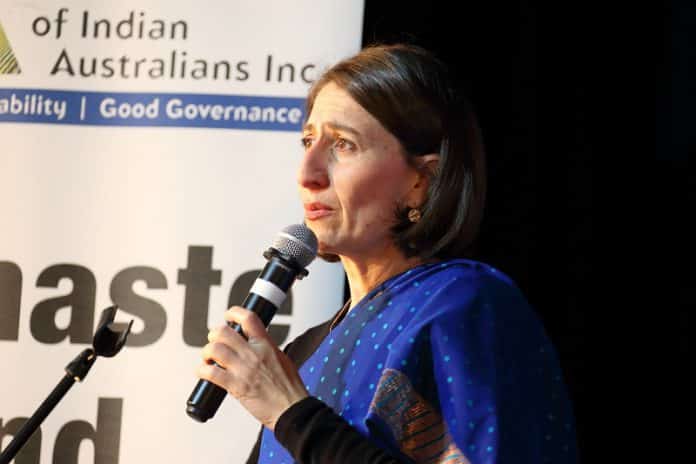 
Now this was an Independence Day event with a difference.
If you thought Independence Day in our community is marked by a series of repeat melas, parties, similar sounding speeches and the same bad entertainment, the Council of Indian Australians (CIA) brought in a breath of fresh air this August.
CIA’s India Day Dinner at Blacktown raised the standard a few notches higher in community-based events. As special guest, Premier Gladys Berejiklian was treated to a classy welcome, a tastefully decorated stage, a sound system that was pleasant to the ear, and well thought-out entertainment.
Choosing a dignified deep blue silk sari for the occasion, the Premier looked graceful and at ease.
“It’s hard to imagine NSW without the contribution of Indian Australians,” she said in her address.

She also recalled the hugely successful 2014 visit of India’s Prime Minister Narendra Modi. “He inspired not only 20,000 people in his audience, but 20 million people across this nation,” she added.
Adding to the freshness was CIA President Mohit Kumar’s address on the occasion. In a well-written and beautifully articulated speech, Mohit exhorted his compatriots to adopt the ways of the new land that is now home to them, and to contribute to its betterment with wholeheartedness.
As well, in a welcome initiative, Mohit announced that the CIA would be working closely with the United Indian Associations (UIA) in a non-partisan approach to solve the issues faced by the community.
The entertainment was suitably gracious and elegant, with nary a hint of badly choreographed Bollywood dances performed by badly costumed children.
The highlight of the show was the Council’s film Freedom Yatra, a 27-minute film that traced the history of India’s Independence. Created by Sydney-based film-maker Sanjeev Mehra, the film starred local talent, with most of the main roles played by CIA’s executive committee themselves. It turned out to be the showstopper of the event.
Speaking to Indian Link later, Sanjeev revealed the actors were all novices, and he trained then to take on the roles of historical figures such as Laxmibai, Tatya Tope, Bhagat Singh, Nehru and Gandhi. Some ingenuous work went into make-up and costumes. Mohit Kumar and Balu Vijay impressed in their roles as Subhash Chandra Bose and Mahatma Gandhi respectively. For the Indian members of the audience, the patriotic spirit was truly well and truly invoked.

“The project took three months in all,” Sanjeev revealed. “The scripting, directing, editing and post producing were all done by me. I even made the props myself – the charkha and the guns and the nooses.”
Julian Leeser, MP who was present in the audience, brought the topic up at Parliament House, Canberra, this week. “On Saturday, I attended the Council of Indian Australians’ event in Blacktown organised by Mohit Kumar and Sanjay Deshwal,” he said. “The council produced a Bollywood-style video with local Indian members of the community, retelling important moments from India’s history, from Indian mutiny, through to Mahatma Gandhi’s philosophy of non-violence to the proclamation of Indian independence.”
An actor and film-maker with years of experience in Mumbai’s film and TV industry, Sanjeev is thrilled with the response of those who have seen the film. “I am inspired now to create a series of short films on each of our freedom fighters.”
No doubt, Sanjeev’s original cast from Freedom Yatra will play their characters in the fuller versions. We could perhaps then rechristen the CIA as the ‘Council of Indian Actors’.
Also on the occasion, a cricket bat with the signatures of Australian players was auctioned off.
It was wonderful to see the Premier enjoy some freedom herself – from the dreaded selfie hunters. Indian crowds are notorious culprits in this regard; this reporter remembers an event where the poor lady could not even finish her meal in peace, or enjoy the entertainment.
But of course even this time round, there were some serial offenders – you know who you are – who managed to sneak in close to the Premier, mobile phone in hand.
Well done to CIA for a memorable event.
Photos: Evergreen Memories
- Advertisement -
Share
WhatsApp
Facebook
Twitter
Linkedin
Previous articleA day-long event marks FIAN’s Independence Day event
Next articleAustralia keen on fashion diplomacy with India