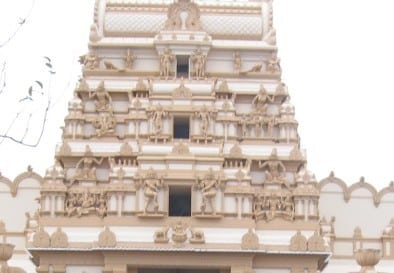 In the tradition of our ancient seers, a determined group of Sydney Hindus took part in and successfully completed a paadayatra (journey by foot) from Murugan Temple at Westmead to Sri Venkateshwara Temple (SVT) at Helensburgh, visiting BAPS Swaminarayan Mandir, Sri Mandir and Shirdi Sai Mandir along the way. Spanning two days over the October long weekend, the marathon walk of nearly 75kms was a real character building exercise for the participants, a test of their physical and mental endurance.

The novel initiative was spearheaded by the Hindu Council of Australia (HCA) in conjunction with Let’s Give Hope, a Sydney based youth group, to unify Hindu temples, missions and organisations in Sydney. While many individuals and groups have previously undertaken the strenuous paadayatra over the past two decades, this is the first time various bodies have come together, making it a successful community-building effort, while reinforcing age-old customs and practices. The milestone event is now set to become a regular fixture of the Sydney Hindu calendar.

Strengthening the mind and body, ‘paada yaatra’ or ‘journey on foot to sacred destinations’ is an integral part of the Hindu heritage. With minimal resources to support them, our rishis and munis have time and time again undertaken this spiritual odyssey in search of the Supreme Being, rediscovering their own identity in the process, and carrying the divine message to the common man. In the twentieth century, this noble tradition was revitalised by Mahatma Gandhi with the historic Dandi March, rallying a nation which eventually led to the overthrow of British rule. Walking is a core aspect of the mainstream Australian lifestyle as well, be it a casual weekend routine or more rigorous fitness regimen. With dedicated coast-to-coast, bush and bay walk trails, it is a must do for many. The Indian community in Australia has warmed to the idea, actively taking part in more strenuous events as well.

Meticulously planned and executed by Sai Paravasthu of Let’s Give Hope and Murali Dharan of SVT, the inaugural 2012 paadayatra was supported by the Premier’s Office, Events NSW, RTA, police and ambulance services, as well as all the local councils along the walking trail. A core group of 54 walkers, comprising of men, women and children in the age bracket of twelve to seventy, attempted the strenuous exercise with 43 achieving the target. Many eager devotees, including individuals and groups representing various temples involved, also joined the focus group along the way, offering colour and dimension to the unique event. Initially tailored for younger participants because of the risks involved, the paadayatra was opened up to experienced walkers and those young at heart, to cater to the demand.

Prior to the walk, an induction night was held for all participants at the Murugan Temple, briefing them extensively on the protocols. Arrangements were also in place regarding health and safety issues. All participants were previously screened and registered, and the event was insured by the HCA.

“Two things prompted me to organise this event,” Paravasthu explained to Indian Link. “One is the Indian tradition of pilgrims walking on special occasions and festivals.  As well in this great country, people do a lot of charitable runs and walks for various good reasons and to support the community. The SVT paadayatra is an amalgam these two diverse aspects. A purely not-for-profit devotional endeavour, our aim is to continue the culture and tradition of paada yatra, at the same time to make it safe and secure for participants.” He added, “By assessing risks and putting in place a proper structure, format and safety measures, more and more people can participate in this unique tradition and keep this culture alive, to be passed on to our future generations here in Australia.”

“Earlier people walked to the temple at different times of the year and randomly, to fulfil the desire of being a traditional pilgrim. As one can assume, walking for such a long distance using some major roads has its own risk. With the formal event now in place which has all the approvals and support, and more importantly the company to do the walk, we have a community presence as well,” he stated.

Inspired by friends who had been walking for decades, in October 2011, Paravasthu took part in the trek to SVT for the first time, joining veterans from Westmead to Helensburgh. Staying with family friends overnight at Hurstville, it occurred to him to formalise the event.

“My friends were very supportive of the idea. The following day when we reached SVT, a committee member approached us with the same idea, offering help with all the arrangements,” he explained. “With this level of encouragement and by the grace of the Almighty, I started making enquiries. Earlier this year, I spoke to various organisations on how such public events are run. After extensive research, I registered the event with NSW Premier’s department in May. We had to prepare a lot of paperwork and liaise with a lot of departments and get their approvals,” he added. But it has certainly been worth the effort.

Coordinating the logistics was quite a challenge, admitted SVT’s Murali Dharan. “Besides routes, timings and approvals, we also had to plan for fitness levels and skill sets of individual participants. It was a very diverse group and I am delighted that the event finished without any incidents. The participants themselves, volunteers, various committees and government bodies have been extremely helpful and I am truly humbled by all their support,” he added. “We have also had requests from other temples which were not on this route, including those at Minto and Regents Park. As well on the actual day, we unfortunately had to bypass Karpaga Vinayagar Temple as we were behind schedule. Perhaps next year, we might undertake two different circuits as well as smaller suburban routes. We want significant community involvement and to cater to a wider target group,” he stated. “In taking part in the paadayatra, we are following the illustrious examples of Rama, Sita and Lakshmana as well as that of Adi Shankara,” he added.

The paadayatra began at 6.30 am at Westmead Murugan Temple with the walk team formally seeking the Lord’s blessings before undertaking this pilgrimage. Sporting special event T-shirts and reflective vests, they set off on the trek as a large group of devotees, volunteers and onlookers gathered outside to flag off this maiden venture.

The group was received at BAPS and Sri Mandir with customary honours before heading to Shirdi Sai Mandir at South Strathfield for a tea break.

Speaking to Indian Link en route, Prashant, a young Telugu student stated that it was a real pleasure walking as a group. “It would have been extremely hard on my own. I know many people do it year after year. I am so glad to have company because when you chat along the way the burden is considerably reduced,” he said.

Even as the group walked along Hume Highway, Wentworthville-based Murali sporting his customary thongs, a veteran on this circuit, kept coming back to motivate stragglers, ensuring that their spirits were kept up. Incidentally this paadayatra was Murali’s twenty-fifth trek to SVT, having pioneered this movement.

Well nourished and rehydrated, the group were up for the big spell, the six-hour stretch to Heathcote reaching the Sutherland Motel at dusk, where arrangements had been made for an overnight stay. All along the way volunteer groups organised simple but nutritious food and drinks.

At the crack of dawn the next morning, the walkers set off on the final leg from Heathcote to Helensburgh, a 20km concrete belt along the highway. Walking in single file, they were a visible group as motorists honked in support. The first of the walkers Anandarajah Karuppiah reached the temple at 10am, ahead of schedule. With blisters on their feet, sweat pouring down their backs and memorable tales to tell, the rest trickled in slowly, with the tail end finally arriving at 2pm. It was a journey that will not be easily forgotten – of friendships cemented, lessons learnt and experiences gained. The temple priests formally welcomed the pilgrims, offering thanksgiving for safe completion of the paadayatra. Volunteers prepared a simple annadhaanam suited for the pilgrim’s overworked bodies. It was time for smiles and tributes all round. A formal felicitation function has been planned for a later date to celebrate yet another iconic milestone to an already full calendar.