On Durga Puja, a nostalgic throwback to an enduring melody 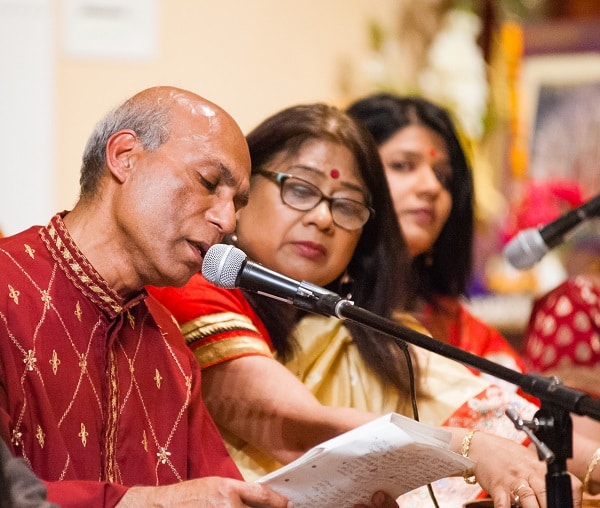 Each year, on Mahalaya – the first day of Durga Puja – millions of Bengalis, particularly those in West Bengal wake up at the crack of dawn to the sounds of Mahisasura Mardini, a radio program broadcast by All India Radio for over 85 years, its most popular iteration composed by Pankaj Mullick. It’s no talk show or latest hits countdown, though – it’s the quintessential collection of classical Bengali songs, music and acoustic melodrama in the form of scriptural verses that marks the beginning of one of the biggest festivals in India. Thousands of miles from home, a group of devoted and talented vocalists recently performed Mullick’s unique melodies to a captivated audience, evoking for many a very particular and welcome nostalgia.
Durga Puja, a Hindu festival, is at its heart the epitome of the celebration of good over evil. A ten-day long festival, it has evolved into an event that is social as much as it is religious, although its origins lie in the triumph of Goddess Durga over the shape-shifting demon, Mahisasura. Other than the eponymous radio program, Mahisasura Mardini is the name given to the fierce form of Goddess Durga – literally, the destroyer of Mahisasura.

Kakoli Mukherjee, one of Sydney’s pre-eminent classical vocalists, directed the troupe of primarily local artists who performed the Mahisasura Mardini program at Baulkham Hills High School and, separately, at the Vedanta Centre of Sydney last month. For Mukherjee, like many of her ensemble and those in the audience, it was a chance to rekindle treasured memories. “We grew up listening to it in the early morning of Mahalaya. In the whole neighbourhood, in every house, all family members would sit in front of the radio and listen. The songs were sung by the famous singers of those days and we always considered this event as the beginning of Durga Puja. We never got bored even though we have been doing it for so many years.”
Speaking to Indian Link about leading the group of 22 singers and instrumentalists who formed a dynamic chorus, Mukherjee’s overwhelming feeling is one of pride. “I feel proud that I have been able to help many Sydney residents to be a part of this event,” says Mukherjee. “Each one of us feels proud to continue with this tradition. We have performed it in many venues over the years, and everyone spends valuable time and puts in a lot of effort to make it a success.”
In fact, Mukherjee has led performances of the program in Sydney for over a decade now, and the dedication of her group is a testament to the enduring nature of Mullick’s composition. “I have heard from many people ‘Again, you are all performing the same program!’ But then again, many of them still come to watch it, and afterwards they often feel like they have missed out on being a part of it,” laughs Mukherjee.

Parth Upadhyay, a 25-year-old singer who has been learning classical music under Mukherjee for a remarkable 12 years, was the youngest member of this year’s ensemble, and he enjoyed the unique challenges that the program presented to him. “Mahisasura Mardini is in a foreign language to me and is the product of a beautiful, vibrant Bengali culture and its love for a cultivated literature,” says Upadhyay. “What was initially a radio program has taken the form of a live performance, and is still captivating musicians and audiences alike for so many years – that makes it unique compared to other bhajans and concerts in which I’ve performed.”
For Upadhyay, the experience also carried with it some very welcome fringe benefits. “Being the youngest is particularly fun as you are spoilt by all at the practice sessions,” laughs Upadhyay. “The group is full of talented and jovial members whose experience and light heartedness made it a highly enjoyable program to be a part of. And, with every passing Durga Puja, I’ve fallen more and more in love with this mishti loving community and we can’t wait for the next one!”

This year’s event also included a collaboration with Udok Performing Arts, a group of talented Bharatanayam dancers headquartered in Kolkata, whose contribution Mukherjee labelled as “brilliant.”
The multi-discipline performance is a mark of how much more than just a radio program Mahisasura Mardini has become over the years – as much as the sound of the dhak and the ululations of Bengali women, Mahisasura Mardini embodies the sound and soul of Durga Puja.
Photos: Kartik Malik