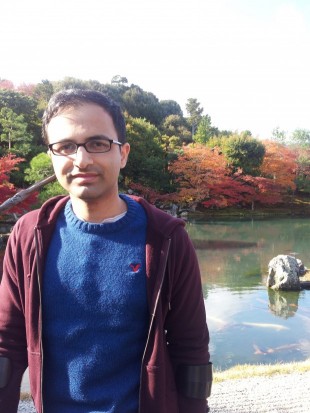 Faridabad is in the news again! After the success of the children from Tender Heart School at the Special Olympics in Newcastle last month (December (2) issue of Indian Link), comes Kunal Sharma’s success story.

“Not many lessons to be taken from my story,” says Kunal, with endearing humility.

Readers, I am sure, will beg to differ once they have read this report.

Meet 25-year old Kunal Sharma, graduate lawyer at Herbert Smith Freehills, and winner of the 2014 Rhodes scholarship to Oxford University for post-graduate studies in law. Rhodes is the oldest and most prestigious international graduate scholarship program in the world. Established in 1903, 83 outstanding all-round scholars are selected each year to study at Oxford, nine from Australia. Kunal is among these few but he discounts his efforts, and attributes his success to his teachers at UNSW who encouraged him to apply, encouragement from his parents, and his good luck.

The scholarship process is tough and thorough. Starting with the application and a personal statement of why you want the scholarship, the Rhodes Committee shortlisted 12 candidates in NSW for the first round of interviews at Government House, chaired by the Governor. The shortlisted six went for the second round of interviews based a lot more on critical thinking, including views on current account issues, and the key challenges facing Australia and the world.

The Sydney Morning Herald’s news item that featured Kunal’s success in securing the Rhodes scholarship quoted UNSW’s Dean of Law, Professor David Dixon saying, “His teachers said to me he was the best legal mind they’d come across for years. He’s one of the very best students we’ve ever had at the university . . . an extraordinarily impressive young man”.

Kunal came to Australia with his parents in 2001 as a 12-year old. Croydon, Sydney was far away from Faridabad, India, where he grew up with his extended family of cousins, uncles and grandparents.

“Transitioning from such a different country like India was a shock, but very quickly Australia seemed like home to me,” says Kunal.

Moving countries is a massive change for a young boy, but what was to follow could be called an upheaval.

At the age of 13, Kunal was diagnosed with Ewing’s sarcoma, a malignant bone tumour, for the first time. His family moved to Westmead where he started treatment.

He brushes off these challenges saying, “I am lucky as the systems here are supportive. Glad there are good doctors out there – we place our lives in their hands!”

Kunal came out of this dark phase as Dux of the selective Girraween High School in 2006, completing his HSC with a UAI of 99.95, and started studying law at UNSW. But the cancer hit again with renewed vengeance when he was 19, and Kunal lost his right leg.

Again, with characteristic ease, he says, “I am still getting used to not having a limb. It is just one of those challenges to which you can adapt. It is just about doing things in a different way”.

When questioned about what gave him inner strength in these trying times, Kunal says, “There was no contemplating other options. What would be option – to give up? There was too much around to give up and no reason to think that life was not good. I was given opportunities at every step of the way. I have great parents and good teachers, and I wanted to learn more about the world”.

Overcoming hurdles seems natural to Kunal now. “I was looking for positivity and found it, maybe. I have a sense of groundedness in the greatness of the world and things beyond what I know,” he claims.

What excites Kunal is law. “I was interested in law – more because of my idea of law, not what I knew about law. The idea of using law to defend human rights, the various ways in which law permeates the social fabric, and how you can change society by getting a closer understanding of the law – this is what interests me,” he explains.

When he started law he wasn’t sure what he would learn or do with law, but the study of the subject held a lot of promise for young Kunal.

“Law is the way we govern ourselves, it is way we come together and decide to lead our lives in a certain way,” he avers.

He found that there were various ways of influencing society through private law – the law between people, as against between people and state, explains Kunal. This includes laws of contract and taxation. In September this year, Kunal will head to Oxford University to undertake a Bachelor of Civil Law and a Master of Public Policy. He hopes to undertake research in areas of taxation and access to welfare, particularly through access to housing and education.

Engagement with social and political issues has always been something with which Kunal has been involved. He is currently an advisory member to the Board of the Multicultural Disability Advocacy Association and an active member of the NSW Young Lawyers International Law Committee. Previously, Kunal has volunteered with the Oaktree Foundation and St Vincent de Paul Society, and completed internships with the Aboriginal Legal Service and the NSW Attorney General’s Department. Kunal had to give up karate, but he is still a keen swimmer and writes short stories.

Attitude, Winston Churchill said, is a little thing that makes a big difference.