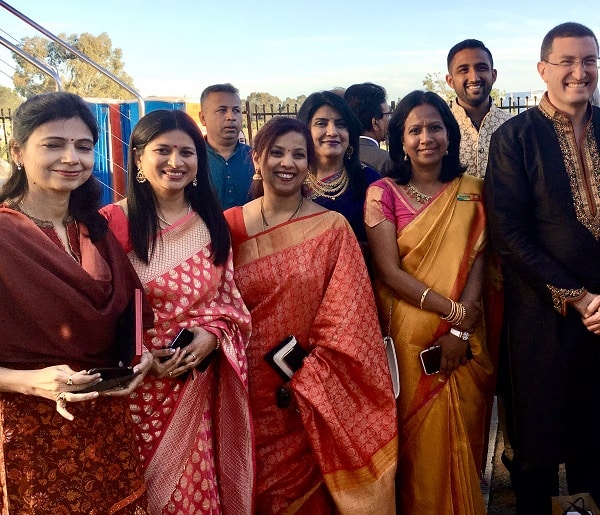 The Deepavali Fair organised by the Hindu Council of Australia Sydney has set such high standards that often it is the benchmark to which all other Diwali melas are compared. This year, with a change of venue from Parramatta to Bella Vista for its main event, the gathering was smaller than in the earlier years. But those who made the attempt to get to the new venue were rewarded with the festivities of Diwali and an opportunity to catch up with their friends and acquaintances on a fun Sunday afternoon.

Hindu Council has done well in reaching out to the community across the city in satellite Diwali functions organised at various suburbs. This year, like before, Rouse Hill, Martin Place in the CBD, Cherrybrook Village and Strathfield Park have been the other venues for the celebration of Diwali. That they have continually been able to branch out and extend Diwali to the whole month, adds to their main objective of preserving, promoting and sharing the Hindu culture in Australia.

“It is by taking these small steps of extending our message in various areas of Sydney that we feel we are able to educate all on various aspects of Hinduism. And we enjoy the opportunity of engaging with even the young people of Indian origin who may have been born and brought up here and share with them the depth of Hindu religion,” Jay Raman, President of NSW HCA told Indian Link.

Martin Place is one such area whereas the local office workers rush through the CBD in Sydney during their lunch hour, they pause and enjoy the Bollywood songs and dances from a temporary make-shift stage . With Indian business stalls set up and of course, the mandatory Indian food offerings, it was good to see the touch of Diwali in the heart of Sydney. Perhaps a better coordination of the music and the dances could have added to the experience.

In Bella Vista itself, the venue opened up from a narrow entrance to a massive ground where families could spread out with their picnic baskets or food from the local stalls and enjoy the cultural performances.

However, unlike last year, when both the Prime Minister Scott Morrison and Premier Gladys Berejklian were present to pitch for the Indian-Australian votes, this year the speeches were fewer in number. The highlight: Federal MP Julian Leeser’s address in Hindi, and the very appropriately picked Kanjeevaram sarees of NSW Opposition Leader Jodi McKay and her colleague Julie Finn.

In the background, the somewhat sad-looking but giant effigy of Ravana kept an eye on the proceedings. As evening time set in, the business stall canopies lit up in various coloured lights to further add to the Diwali feel. As the demon-king Ravana went up in flames, the Diwali message of good conquering evil was suitably reinforced.