A love of Hindi 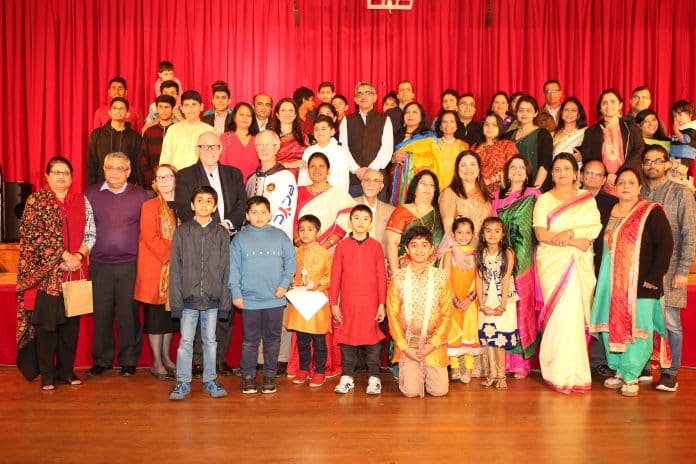 Reading Time: 4 minutesThornleigh’s IABBV Hindi School commemorated its 31 years in the teaching of Hindi by celebrating Hindi Divas on 2 September. It marked the occasion in partnership with Multicultural NSW and the Indian Cultural Centre, Consulate General of India.
Hindi was adopted as the official language of India by the Indian Constituent Assembly on September 14, 1949. People at home in India and Indians overseas celebrate this day with a tribute to a language which is the third-most spoken in the world. In Australia, it is the tenth most widely spoken language in Australia.
Hindi Divas is the celebration of not only the language but also the culture in which it is spoken. In keeping with this, the Hindi students of IABBV showcased their learning of the language by means of presentations in song, dance, skits and poetry.

A song on the need to avoid single-use plastics to save the environment, joined other popular numbers such as Choti Si Asha and Tik Tik Tik. The students of IABBV Hindi School also presented a short play entitled Chahiye Kurta Raja Ko that conveyed that money can’t buy happiness. The highlight of the event was the Rajasthani folk dance Ghoomar and Bhangra choreographed by the teachers of IABBV Hindi School.
The performances showed the rich diversity and colour of India. Along with diverse performances, the event had a wide variety of food from different parts of India ranging from idli and appams to chana and kulcha. The students of Hindi Samaj Girraween Hindi School also participated in this event and rendered a prayer Prathna: Daya Ker Daan.
Earlier, the event commenced with an amazing rendition of We are Australian by an IABBV student and accomplished singer Tanaya Kumar; she was accompanied by Peter Kirkwood on the didgeridoo. This was followed by the singing of the Australian and Indian National Anthems and all were welcomed with the lighting of the lamp by the dignitaries of the day.
Kusum Chaudhary, Hindi teacher, IABBV Hindi School, was honoured on the release of her Hindi book Meri Priya Shayan Bela Hindi Kavitayen (My Favourite Bedtime Poems).

Yours truly got to make a presentation as well, as an IABBV alumnus and Ambassador for Languages DET NSW. I spoke about the importance of studying a second language for students in Australia. The proceedings were closely coordinated by Mala Aunty, founder of IABBV Hindi School, who with her warmth and nurturing qualities has become the community’s favourite Hindi personality.
The event was attended by Damien Tudehope (State Member for Epping who was representing Ray Williams, MP Minister for Multiculturalism & Minister for Disability Services); B Vanlalvawana (Consul General of India); Julian Leeser (Federal Member for Berowra); Geoff Lee (State Member for Parramatta & Parliamentary Secretary to the Premier, Western Sydney and Multiculturalism); Jodi McKay (Member for Strathfield); Julia Finn (Member for Granville); Phillip Ruddock (Mayor Hornsby Shire Council); community elder Neville Roach AO; Dr Peter Freidlander (Lecturer Hindi, Australian National University); Peter Kirkwood (President, PCYC); Police Officers from the Hornsby Local Area Command, and other community leaders.
Damien Tudehope, Geoff Lee, Jodi McKay, Julian Leeser, Julia Finn and Peter Freidlander gave some rousing speeches that illustrated multiculturalism in Australia. Highlighting the need to study a second language, they endorsed the NSW Community Language Schools Program and encouraged students to study Hindi. The Consul General B Vanlalvawna also gave an excellent speech and reminded all present of the significance of celebrating Hindi Divas and honoured outstanding students for excellence in Hindi.
The late Mr Dinesh Shrivastava, who did much for the cause of Hindi teaching in Australia, was also remembered: he passed away in June 2018. Julian Leeser, Federal Member for Berowra and himself an alumnus of IABBV Hindi School, honoured HSC Hindi state-toppers Pratyush Charde and Naetik Saini for coming first and second respectively in NSW for Hindi Continuers in 2017.
Peter Kirkwood of PCYC addressed the audience elaborating on the Hornsby/Kuringai PCYC and honoured the sponsors and volunteers of IABBV Hindi School. This year the annual poetry recitation competition was supported by the Luthra family in memory of their mother, Aunty Vimla. Aunty Vimla, a strong supporter of the IABBV Hindi School, was passionate about writing poetry and was the author of two books.
This year about forty students enthusiastically took part in the competition, their recitations focusing on the humorous as well as the more thought-provoking. India’s former prime minister Atal Bihari Vajpayee, himself a poet, found himself reincarnated on the occasion. Winners were presented gift vouchers and trophies. The event ended with a light Indian lunch which had dishes from various Indian states.
Hindi Divas promoted Hindi as a language and encouraged people from Indian and non-Indian backgrounds to engage with the language. It was great to interact with parliamentarians from both sides of the spectrum as they enjoyed the Indian presentations. For parents and teachers, the event aroused much nostalgia.
For the kids, who were at the centre of it all, it was an occasion to have some fun, while showing the community what they had learned this school year.
Photo: Vinay Kumar/Vinz Photography