COVID-19: Guru Nanak Free Kitchenette reaches out to the needy 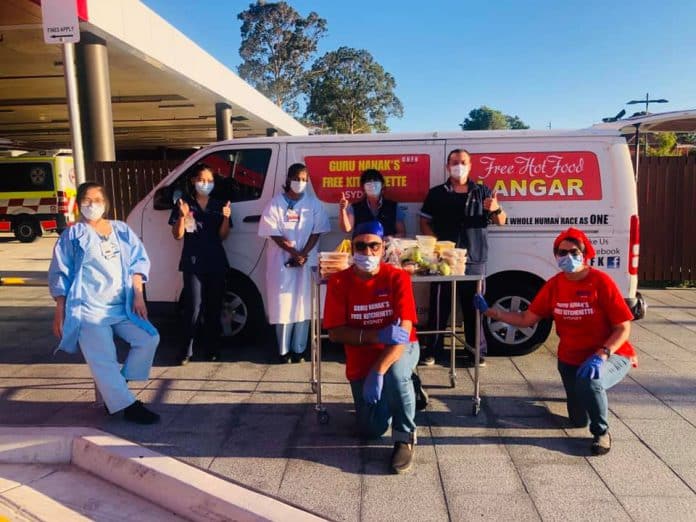 It was Guru Nanak Free Kitchenette’s designated weekend to operate (it is active twice a month). Lucky Singh and her husband Balbir were up early, organising the grocery shop from Parklea Markets. The purpose-built professional kitchen in the backyard of their Glenwood home began its big cook after Sikh prayers as usual for all volunteers.

By midday the meal was ready and arranged on tables up the front. International students began to drop by to pick up their boxes. They’ve been doing so for some months now, but with recent COVID-related difficulties, the number of students has increased.

Also dropping by this Saturday, were people from old age homes and other seniors, including one from as far as Holsworthy. Volunteers began driving out to the homes of people who had called ahead and requested food. Meanwhile, the van was filled with biscuits, muffins, fresh fruit, juices, tea and coffee supplies, and Lucky and Balbir drove out to Blacktown and Westmead Hospitals where they have been serving food free to anyone who needs it, including hospital staff and families of patients who may have been waiting around for hours without a full meal. Also coming here to see the Singhs as usual, were more students – this time to pick up dry supplies such as rice, flour, dals, sugar, fresh fruit, long-life milk, toiletries.

Replenished with more boxes from home, the Singhs then drove out to the CBD’s Martin Place where they have been feeding the homeless for years now. Video clips from this seva (service) – sometimes with free gifts of blankets thrown in – have gone viral in Sydney’s Indian community. This time round though, it was different. Their usual diners had already been calling, because other charity services who have been helping them have ceased operations due to COVID scare. Having fed the waiting crowds and chatting with a few regulars, the Singhs began the drive back home as the clock pushed 11.00pm.

A message appeared on the Guru Nanak Free Kitchenette’s Facebook page. It was from an Indian person, quarantined in a city hotel, who could not eat the repeat cold dinner left outside his door. A friend from Perth had suggested to him to reach out to GNFK.

Do we have any boxes left, Balbir asked Lucky, pulling up on the side.

Back they drove to the city. They organised with the police detail at the hotel to have three meals, fresh fruit and juice bottles delivered to the person in quarantine.

The policeman on duty opened the boxes for a check.

Observing his face as he did so, Lucky Singh asked tentatively, would you like a box yourself? Yes please, he said.

The Singhs left their last 12 boxes for him and his mates. In all, 500 boxes of Indian food were distributed that day by GNFK.

The home-based charity was launched by the Singhs in 2012, after they saw a similar operation in Canada.

“We functioned with no outside help save extended family and a Facebook page, feeding the homeless in Martin Place once in three months,” Lucky Singh told Indian Link, and added, laughing, “It did not go down well in the early days, with few takers for our home-cooked Indian vegetarian meals!”

Today they perform this seva every fortnight, and have added a raft of other services. They’ve also added a growing team of volunteers – not just from the local Indian community, but also from the mainstream, and from China, Nepal, Sri Lanka, Fiji. Local businesses such as Sharma’s Kitchen and Curry Masters have been donating supplies for years now, and monetary donations have begun to come in. Every time a Facebook post goes out after seva, the calls come in – when’s your next food drive?

“We are guided by the Sikh principles of Sarbat da bhala (May everyone prosper) and from what we saw our devout Sikh parents do all their lives,” Lucky said. “Thanks to all our volunteers – our cooks, our drivers – we do believe that everyone will prosper, and that it’s really a wonderful world out there.”