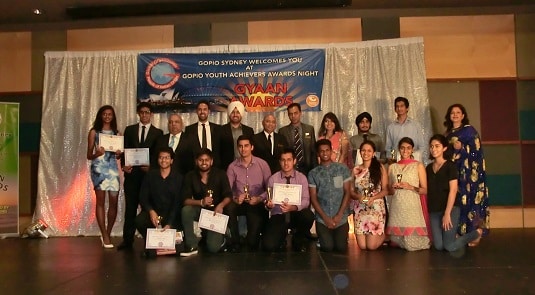 Reading Time: 2 minutesThe Global Organisation of People of Indian Origin (GOPIO) played host to some 350 people recently at its annual felicitation of the achievers in our community

While billed as a Young Achievers Awards Night for those Indian Australian students who had achieved a high ATAR in their HSC, the evening also recognised other members of the community who had contributed in fields such as literature, film, volunteering and community service activities.
The program started promptly at 6pm and the felicitations continued till just past 10pm. During the four hours, the awardees were honoured, the assembled politicians congratulated the winners, and cultural performances added to the fun element of the evening.
With the NSW state elections less than a month away, this was an excellent opportunity for both Labor and Liberal politicians from the state and federal levels to be seen and heard by the Indian community. While Federal Labor’s multicultural shadow minister Michelle Rowland looked splendid in her red salwar kameez, it was interesting to note the dress-ups now also extended to Labor’s Sam Dastiyari. In his smart sherwani, Senator Dastiyari far outshone Castle Hill federal MP Alex Hawke and State member for Hornsby Matt Keane. Indian Australian gatherings seem destined to be a pollie fashion show as we move towards an interesting federal election in 2016.
Speaking on the occasion Michelle Rowland confirmed that she personally contributed to GOPIO as she believed in their values which includes lending a helping hand for the Indian community which comprises international students, seniors, local youth, business owners, families, women and anyone else in the community that needs assistance.
“They also help in crisis fund raising and also in networking opportunities, all these are close to my heart,” Minister Rowland said.

Federal MP Alex Hawke, who also heads the Liberal Party Friends of India Group spoke about the special status which Australia accords to India and the warm relationship between PM Abbott and PM Modi.
“The closeness between the two leaders was there for all to see in November last year when PM Modi visited Australia,” he reminded all.
Matt Kean, Member for Hornsby added to the general theme of why Indian make such great Australian citizens and how he admires their values of love for family and strong belief in education.
Bhupinder Chibber, President GOPIO while congratulating the winners, also told the young achievers to seek out their best potential and not be caged by their peers.
The evening sponsored by Bank of Queensland Bella Vista was a wonderful opportunity to congratulate the 20 achievers for their HSC and recognise their hard work. Tagging on another 20 presentations to largely more senior community members for non-academic achievements with limited information of the judging criteria, only took away from the billed young achievers night. Nonetheless, as a community gathering to meet, greet and network with over 350 people, it was well organised and an enjoyable evening.