A golden Diwali at Opera House 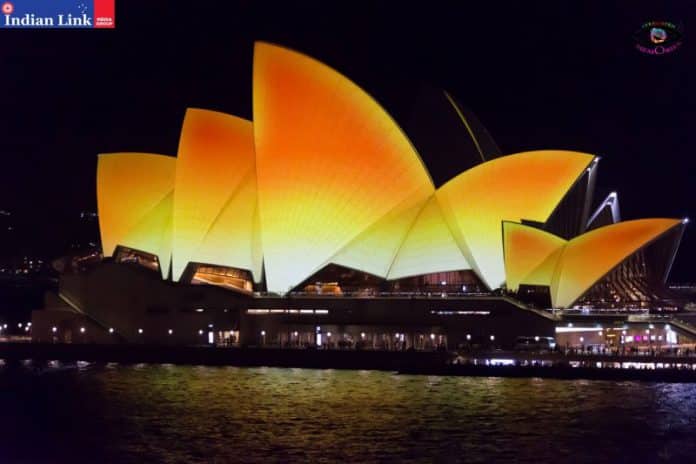 Five, four, three, two, one.
The crowd chanted, its expectation rising with each number. Then, as NSW Premier Gladys Berejiklian threw on the switch, the sails of the Sydney Opera House came alive in a rich shade of golden with just a blush of red.

Was it a coincidence that the sails resembled the mango motif that appears so commonly in the Hindu celebrations? Perhaps, but it seemed only fitting that one of the most recognisable landmarks in the world was lit up for perhaps the most recognisable Indian festival, Diwali.
It was an acknowledgement, as Berejiklian and all other speakers pointed out, of the stellar contribution of Indians to the growth of NSW and Australia.


The select gathering of invitees at the rooftop of the Museum of Contemporary Art, dressed in its most fetching festive finery, had the best vantage point for the lighting up of the sails, which was but the most obvious of many high points of the Diwali evening hosted by the NSW Premier and Multicultural NSW. Prominent members of the Indian-Australian community added that extra sheen to the small but glittering evening.
Apart from the Premier herself, Minister for Multiculturalism Ray Williams, Seven Hills MP Mark Taylor, Sydney FC chairman Scott Barlow, Dr GK Harinath, Chair of Multicultural NSW Advisory Board, Parramatta MP Dr Geoff Lee, Strathfield MLA Jodi McKay, Granville MLA Julia Finn and CEO of AFL NSW, Sam Graham, graced the event. Consul General of India in Sydney, B Vanlalvawna, represented the Indian government.

Williams struck a chord with the gathering when he said that the reason Diwali resonated with everyone was due to its message of the victory of good over evil. “That is a message for all of humanity,” Williams said.
Berejiklian also praised the message of Diwali – “It is all about awakening, revitalisation and (victory of) good over evil” – and the contribution of Indians who shared similar values of strong family bonds and importance of education with Australians.
While she mentioned it in passing, the lighting of the Opera House sails was perhaps especially significant for the Premier: her father was a migrant and he worked as a welder on the second-highest sail of the Opera House when it was being built. So, for her to light up those very sails in the honour of another migrant community would have felt fitting.

No doubt feeling proud about the warm words about Indians, Consul General B Vanlalvawna reciprocated in equal measure, saying that the gesture of lighting up the Opera House was a symbol of the multiculturalism and inclusiveness of Australia.
Dr GK Harinath extended the sense of gratitude when he made the pertinent observation that for most Indian-Australians, the janmabhoomi (land of birth) was India while the karmabhoomi (land of livelihood) was Australia. “What an honour to be standing on the shores of our karmabhoomi to celebrate the festival of our janmabhoomi,” Harinath said, to warm applause. He also praised the BAPS Swaminarayan Temple for setting up the beautiful – and divinely delicious – Annakut display in quick time.

The evening also honoured six Indian-Australians for the service to the community and society. These included Dr Prabha Chandra to reduce the incidence of diabetes in the Blacktown area; Sai Paravastu for feeding the homeless in the Parramatta area; Dnyanam Muthkrishnan for volunteering every Wednesday at the Royal Rahabilitation Hospital in Gladesville for the past 25 years and for starting the first Tamil school in Australia; Dr Prabhat Sinha, for holding Hindi language classes and advocating the inclusion of Hindi in the HSC curriculum; Dr Rakesh Sachdeva for establishing a forum for senior citizens and establishing a new dementia day care; and Mandar Tamhankar for starting a driving school and mentoring young drivers to drive safely.

“My dad will be in touch shortly,” emcee Khushaal Vyas self-mockingly joked, in what was one of the many comic moments he provided as he hosted the event with natural élan.
While the contribution of the honour recipients is undoubtedly applause-worthy, one was left wondering if there could perhaps have been greater representation for women, and indeed, youngsters.
But these thoughts were pushed to the background, at least for the moment, as the priest Jatin Kumar Bhat honoured the dignitaries amid Vedic chants. Then, the Premier took the stage one final time for the highlight of the evening.

As everyone counted down from five to one and greeted each other ‘Happy Diwali,’ Berejiklian flicked the switch to turn the Opera House into a glimmering spectacle, evoking audible ‘awww’s from all those present.

As everyone took in the glorious sight, and took mandatory selfies and pictures with the golden sails in the background, the mind went back to what Berejiklian had said earlier during her address. “Thank you for being here to celebrate the festival of lights in the most symbolic way in New South Wales, and that is by lighting up the Opera House sails,” she had said. “It doesn’t get better than that!”