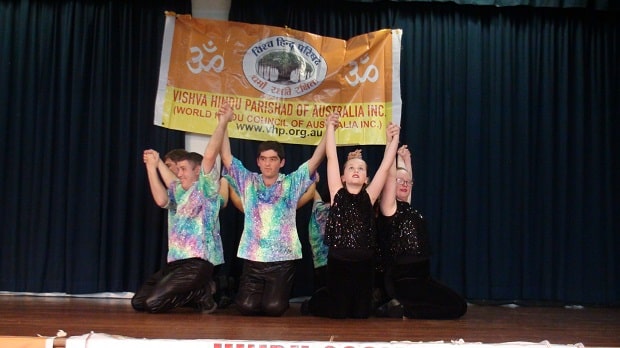 Reading Time: 3 minutesHSSF marked the International Day of People with Disabilities with a special Fun Day for people with special needs and their carers

In celebration of the International Day of People with Disabilities, the Hindu Social Services Foundation (HSSF) a division of Vishwa Hindu Parishad Australia recently organised a Fun Day at Don Moore Community Centre in North Rocks.

Attended by over 100 people, the event, in its sixth year, once again brought together people with special needs and their carers. The participants included people from many nationalities and ethnic backgrounds, drawn together by their aim to work for a common cause.

CEO of Many Minds Link and President of the Differently Abled People Association (DAPA), Vincent Yu was special guest at the evening.

Yu, a carer and pioneer in the field of disability and special needs, spoke to parents about how to empower their special needs children and help them integrate into mainstream society through positive nurturing and meaningful employment.

It is estimated that four million people in Australia have a disability, half of whom fall within working age (15-64). One in three people either have a disability or are closely related to person with disability.

Almost 90 per cent of disabilities are not directly visible. HSSF has in recent years worked closely with the community to increase awareness and lobby government and aid agencies, particularly in the area of disability and special needs, offering carers much respite and better services.

“We are particularly grateful to Hill Shire Council for supporting us year after year and making such events possible”, Uma Ramasubramanian told Indian Link.

Gokul Shankar, a logistics and business studies student and member of DAPA, performed a number from Bombay Vikings.

This was followed by a keyboard performance from Akhil Narayanan, an autistic 10-year-old with a passion for aviation and electronics.

Among the other performers were Rishikesh Kale, Prashanth Ram, Arjun and his fusion band Element 5. The highlight of the evening was a dance by the Special Olympic Performance Group, which has raised over a million dollars over the past decade.