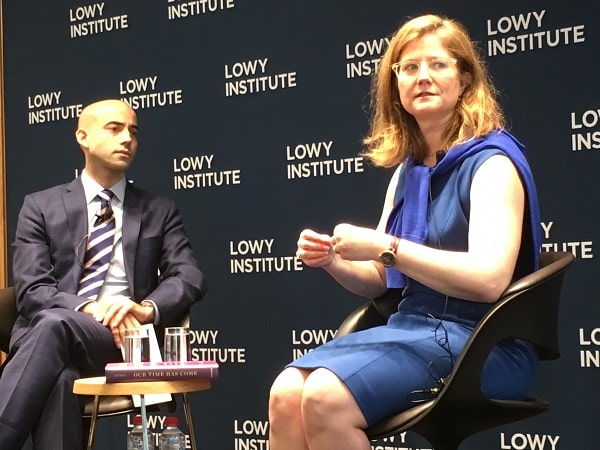 Reading Time: 4 minutesIn early March, Alyssa Ayres, a Senior fellow for India, Pakistan, and South Asia at the New York-based Council on Foreign Relations was a guest at Sydney’s Lowy Institute at a lunch time discussion on India.
A few days later, only a street away, her husband Sadanand Dhume was the keynote speaker at a debate hosted by The Centre for Independent Studies.

Dhume is the Resident Fellow at the American Enterprise Institute in Washington, and South Asia columnist for Wall Street Journal.
Ayres, with more than 25 years of experience in India and South Asia, has recently published her book, Our Time Has Come: How India is Making Its Place in the World. In her lunch time discussion with Lowy Institute Research Fellow Aaron Connelly, she stressed that the title of the book comes from quotes made by two of India’s Prime Ministers, Manmohan Singh and Narendra Modi.
“I felt that both these Prime Ministers are encapsulating a belief in India that it is now emerging as one of the superpowers in the world,” Ayers said at the event. “And the facts back them up: India, in the past three years, has been the world’s seventh largest economy and on track to be the fifth largest by 2018, surpassing even the UK.”
Ayres added that there are still restrictive tariffs and other urgent economic reforms needed in India and that if India needs to accelerate forward, it will have to look at these issues very closely.
Ayres also spoke about India drawing its foreign policy from traditional Indian thinking and linking it to its contemporary direction. “This government uses a term from Sanskrit, which says the World is One Family, and so it builds a relationship with countries such as United States and Russia, which are so different politically to each other.” Ayres also praised India’s ability to achieve some of its foreign power objectives through its strengths in private diplomacy or back channelling.

“India is a net provider of regional assistance in its area and is focused on working under the UN flag,” she said. India is also working on deepening its ties with Vietnam, Singapore and other South East Asian countries while engaging more with the United States, Japan and Australia.
Ayres, however, believes that in spite of India’s rising self-confidence, it is still sensitive to foreign criticism. “India feels it is not given its fair credit for work done and the outside world does not see past its shortcomings,” she said.
While Ayres’ discussion was focused on India’s economic power and foreign policy, the debate at the Centre for Independent Studies, was concentrated on contemporary Indian politics.
Chaired by Tom Switzer, Executive Director of the Centre, and titled Modi: A transformative figure?, the debate featured – apart from Dhume – Balesh Singh, President of the Overseas Friends of BJP Australia; Manoj Sheoran, National President of the Indian Overseas Congress, Australia; and Rahul Jethi, Director of the India Foundation Ltd.
Dhume in his keynote address addressed the question of whether Modi has been a transformative figure for the Indian economy. His analysis was that for Asia’s third largest economy, Modi has not been a transformative figure so far.
“To a large extent, Modi has mirrored the same collectivist, socialist thinking that has marked Indian politics and economic thinking,” Dhume observed. “When you compare the economic policies which have been put in place in India with the high performing economies of North East Asia, those of us who had believed that his election in 2014 would produce compelling structural reforms have been proven so far to be overoptimistic.”

Dhume then prosecuted his case by stating that for the 2014 election, Modi campaigned on development and market-friendly reforms. Yet, fast forward to 2018 and, though the government has succeeded in keeping the GDP rate over 7% and encouraging large amounts of foreign direct investments in 2016, it has failed in achieving substantial reforms in areas like labour laws, land bills, and privatising loss-making state-owned enterprises.
“Tariffs increased in Dec 2017 and have increased again. India, which in 1991 wanted to open its economy, is moving in the opposite direction. Tax terrorism is up under this government and then there was the 2016 blunder of demonetisation,” Dhume said.
Introspecting as to how even he, an experienced observer of all things Modi, got it so wrong before and after the 2014 elections, Dhume acknowledged that he took the slogans at face value. “For example, the slogan which Modi used – ‘maximum governance, minimum government’ – was not a Thatcherite type of politics but rather meant that all decisions were to be concentrated in the Prime Minister’s Office. We also misread the RSS, who are at the root of Modi’s BJP party’s economic ideology. The joke about RSS economics is that it is Marxism plus a cow,” he said.
He then progressed his arguments that India cannot get to the next level without these economic reforms which should have been achieved under Modi. “Economic urgency is what India needs to create over 12 million jobs per year, and it is not even creating a fraction of these,” Dhume added.
With Tom Switzer opening the debate topic, the rest of the evening took a predictable turn with Balesh Singh as President of the Overseas Friends of BJP and Rahul Jethi from India Foundation true to their calling waxed eloquent about the progress and the positive transformation which Modi has brought to India. The Congress representative on the panel, Manoj Sheoran, was clearly outflanked by the two and found it difficult to present his point of view.
What was meant to be a debate became more monologues from the vocal individuals on the panel, with a number of assertions and facts misrepresented or simply untrue.
What could have been a fascinating evening of discussion and debate, degenerated into hyperbole that went unchallenged.