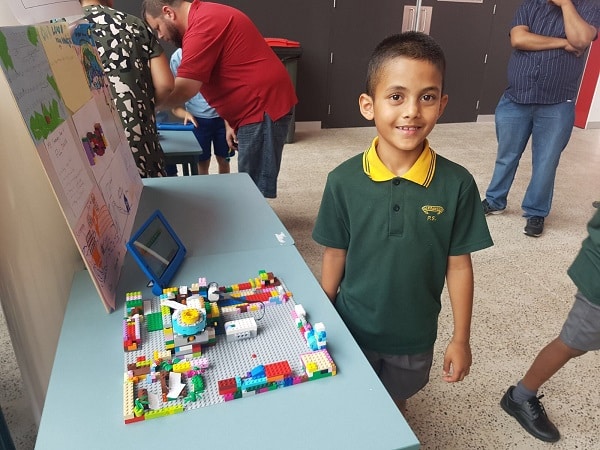 We all know that it rains from the sky and clean water is directed into the drainage system. But, can you explain how and where rain water is filtered and redirected back to our kitchen taps and bathroom showers?

If you feel unsure, perhaps a six-year-old could explain it to you. Many such students aged 6-10 recently researched the journey of a water drop from dam to home and then presented a project on it.

The whole exercise was part of the FIRST ® LEGO ® League Jr (FLL Jr). FIRST® Robotics is an internationally acclaimed robotics program that inspires a passion for Science, Technology, Engineering and Maths in young people. Founded in the USA in 1989, FIRST® Australia was established at Macquarie University in 2006. Each August, a new real world inspired theme is published for students to explore and research. The theme this year is Water. Students from four schools – Parramatta East Public, Girraween Public, Metella Road Public and Oatlands Public – participated in the program. Chintan Shah of the Australian Academy of Robotics And STEM Education, mentored students from the schools.

As part of the competition, students had to research the journey of a water drop, choose a problem related to water’s lifecycle and come up with ideas to solve that problem. Some of the challenges identified by this year’s teams are harvesting rainwater and water filtration. MP Julie Owens attended this year’s exhibition at Macquarie University on 2 December and showed her support through further encouraging students to learn STEM concepts.

“The next generation of professionals will be humanitarian engineers that will use technology to solve complex social, economic and political issues facing mankind. Programs such as FLL Jr are a great way to inspire young kids to follow this path,” Shah said.

To aid their research, the students and their parents went to Warragamba Dam in Western Sydney.

This field trip inspired team Water Bendors – comprising Kieran Hughes, Abdullah Farooq and Jude Khazaleh – to look at the way rainwater was wasted. The solution that they found was to have a roboticised rain water harvesting system. They built a model out of LEGO® blocks and created a water tank that leads to a processing factory. Once the water is processed, it is suitable for drinking purposes. In their model, the Water Bendors created a factory door which was fully automated. Abdullah said, “The main lesson I learnt was to never waste water. I found out that my daily habits, even brushing teeth, changed because of this program.”

Team Aqua Rangers featuring Akileish Ramesh, Amirthan Thiruarrenkan, Ansh Nayak, Liam Lai, Manuth Rupasinghe, and Sanvi Shah focused on the filtration aspect of water processing. They researched how water is captured, filtered and processed to be used in homes. Their model had six key stages of screening, fanning, filtration, chemical processing, reservoir storage and pumping to homes. Akileish said that he and his team were able to devise this rather insightful solution through their logic and LEGO® building skills. “I felt my creativity improved as a result of this experience,” he said.

Interestingly, although parents attended the field trip with the students, they consciously played a small role in the development of the solution and the LEGO® model. Students were encouraged to work as a team and learnt from asking questions of one another. None of the teams had a student leader and instead the focus was on delegating tasks fairly.

Shah, who acted as the head mentor, said, “It gives me a great sense of satisfaction when I see kids becoming more confident in expressing themselves to others, negotiating ideas and taking responsibility for their work. This is a tool that develops in children the abilities of problem-solving, dealing with failures and collaboration.”

Besides, the students also present a speech about the project – which they write themselves – giving them confidence while public-speaking as well.