Even in COVID year, Blacktown Diwali Lights Competition 2020 shines on

Three families – the Sadhus, the Kadukars, and the Upadhyays – continue their winning streaks. 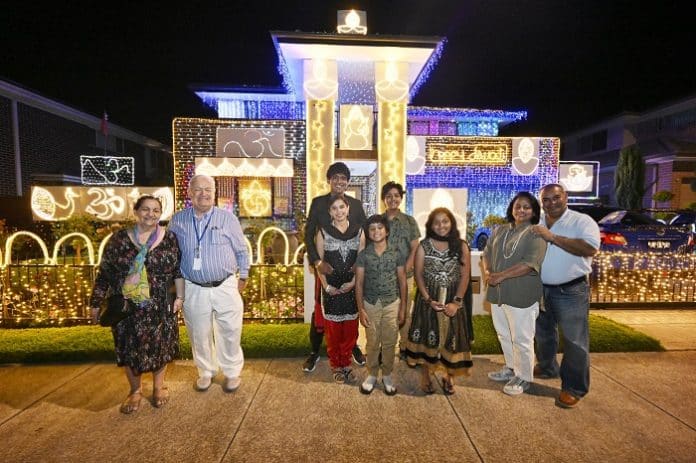 Blacktown, the third largest local council in the country and perhaps one of the most diverse, is the only council that celebrates the Hindu festival of light on a grand scale.

This year, some familiar names have continued their winning streaks of the Diwali lights competition.

Shamila and Vishal Sadhu from Bungarribee brought home the top prize for the third year running.

“People came to see our home in the days leading up to the competition, and they would stand by and watch us put up our decorations,” shared Shamila with Indian Link. 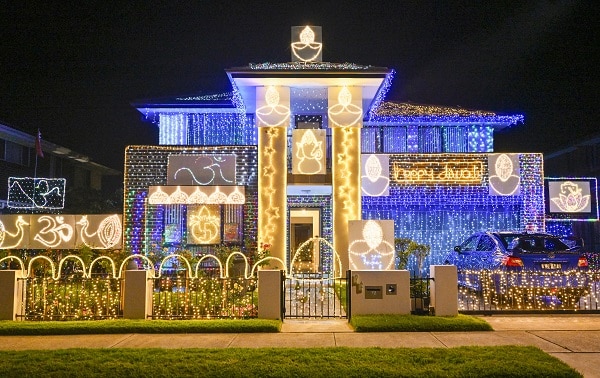 No doubt top contenders for the prize, given their previous wins, the Sadhus’ home was illuminated with fairy lights, creating Diwali icons like diyas and peacocks, lotuses and Om symbols, along the façade.

According to Shamila, it took 2-3 days to complete the endeavour. She credited her husband Vishal’s great planning skills, along with his experience decorating their home for Diwali back in Fiji over the years.

“This year, my husband really took charge with the designs. Honestly, COVID didn’t deter us, and we would’ve decorated our house regardless,” she said.

Blacktown City Mayor Tony Bleasdale OAM, congratulated the winners, pointing out that Blacktown is home to more than 83,000 people of Indian descent who actively participate in this competition every year.

“It is a tribute to all the families who entered this year’s competition during difficult times,” Mayor Bleasdale said. “My wife Nina and I met the finalists during the judging and many of them said that Diwali this year was truly a celebration of emerging from the darkness of COVID into the light of better times.” 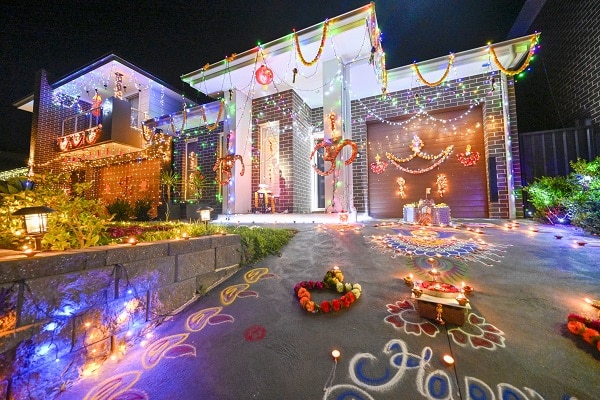 In second place for a second year in a row were Sarita and Apurv Kadukar of Ward Street, Schofields.

“We decided to bring additional Indian flavour to our decorations this year with flower maalas. We incorporated a lot of craft items which we made by hand with recycled materials like cardboard and milk bottles,” husband Apurv told Indian Link.

The family’s decorations looked back to tradition, using oil lamps (alongside electric lights), genda (marigold), and Tulsi vrindavans. Most notably, the Kadukars created a zanjira, a model of a real-life fort built by Shivaji Maharaj, in a nod to Maharashtrian and central Indian folklore.

The novel idea was a lovely touch to their decorations, and according to Sarita, it was thoroughly enjoyed by the neighbourhood’s younger occupants.

“Lots of kids came by to see our fort and ask us how it was made. Then, they went home and build forts of their own!” she said happily.

Sunaina and Yogendra Upadhyay of The Ponds bagged the third prize, holding on to the spot from the previous year. 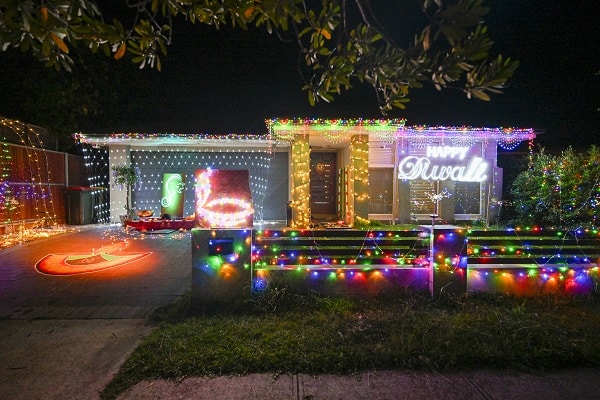 Their house boasted of an undeniable Diwali atmosphere – including the soulful melodies of a flute.

According to Sunaina, inspiration struck while creating a stage for their Ganesha.

“We didn’t want to put our Ganesha on the floor, so we built a special platform. Then we decided, in keeping with this theme, to incorporate some music too,” she explained.

During the days of judging, passers-by were wowed by the lights, colour, and unique tunes of the Upadhyay house.

“There’s a park at the end of our street, so kids would frequently cross our house, and stop to read the signs. We got plenty of questions about Diwali and were happy to explain the significance of festival.”

For Sunaina, decorating the house for Diwali holds special significance.

“Coincidentally, my kids have never been in India during Diwali. That’s why every year, I try to bring the festive spirit here for them to see,” she said with a smile.

A special award for best rangoli went out to Sujata and Manjunath Hukkeri of Ward Street, Schofields. 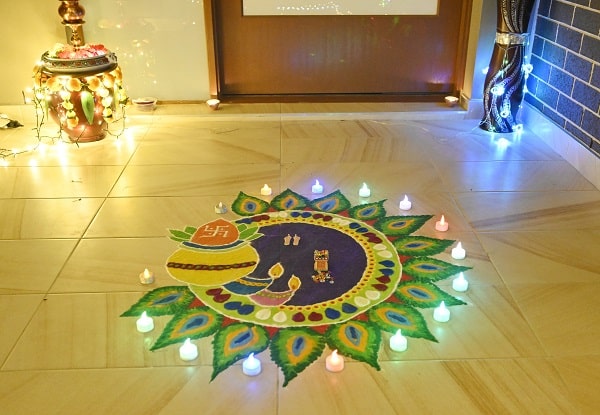 “Making rangolis has been a passion of mine since childhood. This is a special win,” Sujata told Indian Link happily.

Incorporating a specific Diwali theme of diyas, kalashs, and even special charan paduka (goddess’ feet) in her design, Sujata painstakingly created her rangolis starting 5 AM, before her young children woke up.

However, the weather played spoilsport, with rain and wind tarnishing her designs. In the end, she created the rangoli on three separate occasions, using homemade glue mixtures to hold the rangoli in place. 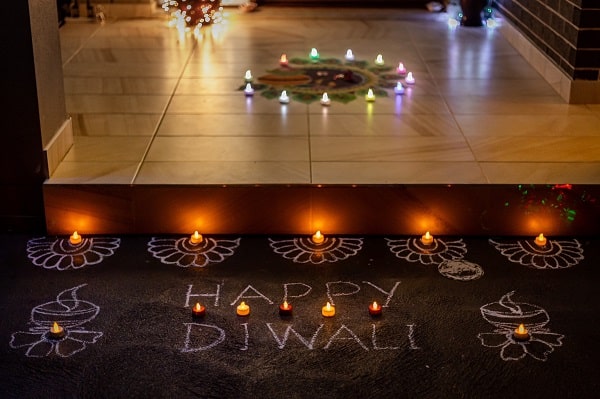 It took a lot of work, but Sujata was ultimately pleased with the results.

“Some visitors took pictures of our rangolis. Maybe they told their family back home that it was their home decoration this year!” husband Manjunath joked.

The Hukkeris (along with the Kadukars) also took home the title of Best Street, which acknowledges families who create a festive atmosphere in their neighbourhoods.

“It’s lovely to win this. Our street, Ward Street in Schofields, is full of tradition. Everyone enthusiastically joins the festivities and shows off the Diwali spirit to the rest of our suburb,” Manjunath said.