The community’s medical fraternity gathers for its annual event 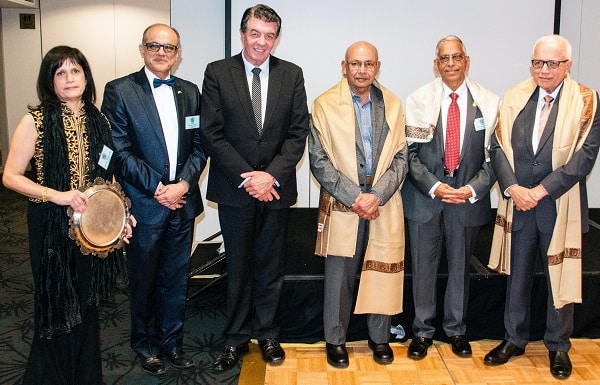 What do doctors talk about when they get together? The banter is about new trends at work, peers who have been in the news, and there’s a doctor joke or three.
You could put a tick against all of these, at the 36th annual dinner of the Australian Indian Medical Graduates Association.
At the elegant event held at Luna Park, President Dr Sunil Vyas outlined the activities of the organisation. It looks after the professional interests of its members, advocates for new doctors moving here from India, and works closely with the larger Australian Medical Association.
Over the years, it has also built relationships with medical associations in India and those in the diaspora, and is well known in the community for its activities pertaining to preventive health checks. Its professional lectures in the medical as well as financial spheres are popular among members, as are the overseas medical conferences. (This year’s conference, slated for October, will be held in Iceland and Norway.)

As chief guest, the Consul General of India (Sydney) Mr Vanlalvawna spoke of the deep affection for Indian doctors that he has seen during his time in Australia. “You are doing much to enhance the image of India in this country,” he said.
Speaking of the healthcare relationships between the two countries, Mr Vanlalvawna urged the doctors to look out for opportunities for collaborations. Medical tourism to India alone will be up 20% by the year 2020 to become a $6 billion industry, he pointed out.
Many of our community’s medical practitioners are already doing their bit towards the country that trained them, with regular programs such as intervention camps in areas where they are needed most.
And many, of course are felicitated by the country they now call home and in which they serve. Each year in the government’s Honours lists announced on Australia Day and on the Queen’s Birthday, Indian-origin doctors find a regular mention.
On this occasion, it was wonderful to see three such achievers felicitated by their peers: Dr GK Hari Harinath OAM; Dr P Sawrikar OAM, and Dr Jay Chandra AM. No doubt they will serve as role models to the younger members of the association, whose numbers, it was interesting to observe, have been gradually rising.

Eminent cardiologist Dr Ross Walker presented the keynote address.  The North Shore based specialist is well-known for his turns in the media (Channel 9’s Today Show, A Current Affair and Excess Baggage, and radio stations 2UE, 6PR, 4BC and 3AW), and for his frequent appearances on the speakers’ circuit. Famous for debunking the myths of modern health and a proponent of a simpler back-to-basics approach to it all, on this occasion Dr Walker spoke about reducing the risk of heart disease without the use of statins (cholesterol-lowering medication). He recommends that we should investigate our susceptibility to heart disease by means of a “coronary calcium score” which is a measure of the amount of calcium in the walls of the arteries. (A CT scan can do this). This, along with the use of supplements and vitamins, can greatly reduce our risk of cardiovascular disease.
Dr Walker also recommends certain lifestyle guidelines in what he calls his “Five keys to ultimate health”. These are: have no addictions; seven to eight hours of good quality sleep; eat less and more naturally; three-to five hours of testing exercise; and happiness and contentment.
Elsewhere, Dr Walker has also spoken about his “Five keys to ultimate happiness”. Well worth a google.

His lively presentation, peppered with jokes, slides of cartoons and phrases such as “that shonky little place in the UK, Cambridge”, had the audience in splits.
It was perhaps his words in conclusion that resonated the strongest with his audience: “It is a privilege to live, and privilege to be a doctor.”
- Advertisement -
Share
WhatsApp
Facebook
Twitter
Linkedin
Previous articleAnirudh Kathirvel, a neuroscientist in the making
Next articleAching for Nepal