A quick look at the Diwali celebrations at SSIA this year. SUDHA NATARAJAN reports 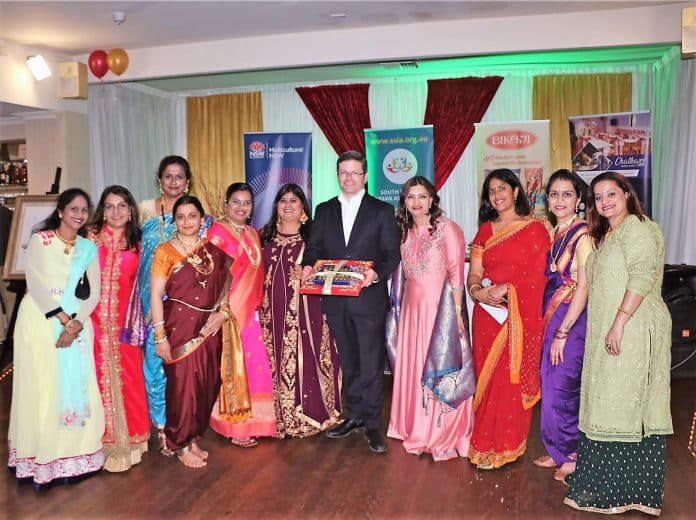 These words rang true as the South Sydney Indian Association (SSIA) started its Diwali Dhoom 2018 at Torwood Lounge Function Centre at Sans Souci recently. Enjoyable performances of singing and dancing by the members kept the festivity fun filled and entertaining. Shyamala Easwaran wowed the crowd with her peacock dance.
Jagrati Lalchandani, the President of the association and her committee of Shweta Doke, Vaishali Narsey, Ramya Badrinath and Swati Tanna claimed they were thrilled when they got a surprise Diwali gift to support their charitable work from the Premier of NSW Gladys Berejiklian, announced by Mark Coure’, Member for Oatley. Their opportunity to do good to the community was enhanced with the funding of $2000 from the Premier and $1000 from the NSW Minister for Multiculturalism Mr. Ray Williams.
Ladies of SSIA were doubly thrilled to receive a congratulatory message from the Prime Minister Scott Morrison, quoting Australia’s ‘Father of Federation’ Sir Henry Parkes wishing that Australia would gather “all the fruits of the culture of the world” and that we would all serve our country “with a patriot’s love”. The letter continued to say, “You are fulfilling that hope”.
David Coleman, the Minister for Immigration, Citizenship and Multicultural Affairs, attended the function and congratulated the association on a fantastic Diwali event. He said, “There is a great atmosphere in the room and I am really pleased to be able to join the group for this celebration. Best wishes to everyone celebrating Diwali this year. It is a wonderful event, with important themes that have stood the test of time.”
Mark Coure’ said, “It is a privilege to be invited to speak and participate in the celebrations, which are of deep significance to the Hindu community. The celebratory culture and festive atmosphere that is being experienced is one of community-mindedness, harmony and joy.”
SSIA is a registered, non-profit organisation with a vision is to ‘Care, Celebrate, Connect & Collaborate’. The primary purpose is to raise funds for various causes, and to aid local families in times of difficulties. They also support home based businesses – helping local women develop their skills and art, and contributing to their financial well-being. With hundreds of participants and a strong team of volunteers, SSIA is entirely run by women.
See pictures from other celebrations/melas across Sydney
CIA’s Little India Fair
FIAN Diwali mela
Blacktown Diwali mela
AHIA Diwali
Deepavali Milan
Deepavali at Church
HCA Diwali
- Advertisement -
Share
WhatsApp
Facebook
Twitter
Linkedin
Previous articleDiwali scenes across Sydney: Deepavali Milan
Next articleBlacktown Diwali Lights Competition 2018