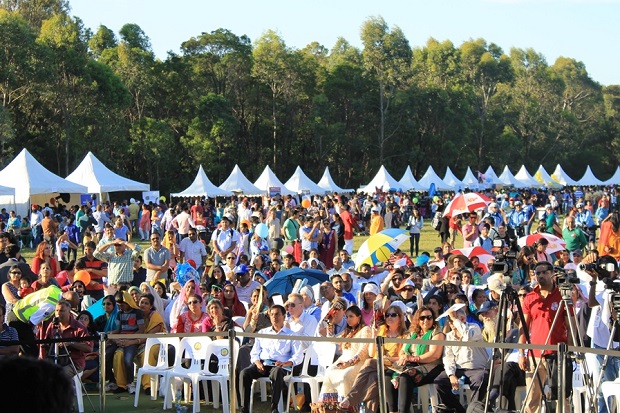 Reading Time: 4 minutesIt’s a dazzling affair yet again at the Hindu Council of Australia’s Deepavali Fair

Tony Abbott, Prime Minister of Australia noted recently, “Deepavali, the Festival of Lights,  is marked by millions of people around the world including many of the 450,000 Australians of Indian origin.”

He sent across his special Deepavali wishes to the community on the occasion of the Deepavali Fair of the Hindu Council of Australia (HCA), reminding us that it is also an opportunity to reflect on the meaning of Deepavali as the triumph of light over darkness.

He added, “It is a time to enjoy good food and entertainment and to celebrate the bonds we share with family and friends.”

The Fair was organised at Parramatta Park which, as Member for Parramatta Geoff Lee put it, is the epicentre of Indian culture right throughout NSW, if not Australia.

The stage was set for the eventful day as the sun god decided to shower his kindness and make the atmosphere perfect. Consul General of India Sanjay Sudhir could not resist noting, “It is great to be here on a day like this, bright and sunny. Look at the riot of colour and the festivity here, it is amazing.”

It was indeed amazing for all those present as merriments began. Dr Nihal Agar, President, HCA addressed the early party goers by extending a very warm welcome and officially opening the event.

With the riot of colour also began the mass movement of entertainment as surprises rolled out one after the other in a well-planned and busy program. As many as 470 performers participated in this marvel of effort. The bhajan Kabhi Ram Banke by the kids from Little Musicians Academy touched the hearts of the audience. Dances groups Hip Hoppers, Bollywood Divas, Meenaxi’s, Nartan Institute of Performing Arts, Bollywood Australia, West Ryde Public School and Shiamak Daver all showed off their Bollywood jhatkas. Also, the Western Union Dance competition has gained momentum and is becoming increasingly popular.

This year, the HCA has made an evident shift to their entertainment theme, the objective being to promote and encourage our traditional art, music, sport and dances. In light of this, folk dances like Kathak, Bharatnatyam, Rajasthani, Odissi, Sambalpuri, Punjabi Bhangra and Gidha were highlighted. These varied cultural performances combined with the Chenda Melam drum show, the rangoli/mehendi art and the game of kabbadi reminded one of the commonality between India and Australia in the form of multiculturalism.

The message of the Deputy Leader of the Opposition in the Federal Parliament, Tanya Plibersek, as read by Senator Lisa Singh, clearly highlighted this commonality and the importance of such festivals and fairs to keep up the multicultural spirit. “I particularly love the meaning and symbolism of Diwali – the light conquering the dark, knowledge conquering ignorance, and love conquering hate. I think in a multicultural country like Australia, there can be no more messages to spread. We need to stand together as a society against racism, hatred and intolerance. We must realise that what makes us different ultimately makes us stronger.”

Inspiring speeches by parliamentary guests and their occasional Namaskar and Namasteys are always worthy of awe and applaud. The Deepavali Fair stirred some incredible memories of the guests as they shared their experience about their recent trips to India and wished everyone heartily on the festive occasion.

It almost seemed like Narendra Modi, Prime Minister of India was present at the fair, due to the frequent mentions made in the speeches about his forthcoming visit to Sydney. Chants of Modi Zindabaad burst out from the crowds every time his name was mentioned. The Indian Prime Minister’s wheels of change are indeed moving fast, as his efforts strengthen with each move to increase India’s stature on the world stage. Reiterating this, Madhav Ram, Vice President General BJP was particularly thrilled to welcome Sydney’s Indian community to engage in this delegation and make the best of the opportunity. What more can be said, Mr Modiji is a prodigy!

While the crowds jumped at the thought of meeting this prodigy, the kids hopped and skipped their way to the jumping castle, with not a care about politics. The dozy dwarfs chose to try the merry-go-round, face painting and camel ride. The games arena and the food stalls were oozing doses of lures as everyone instantly felt the magnetism and urge to queue up.

At the Money Gram stall, cricket fans were super thrilled to take a photo with their iconic dream trophy, the ICC Cricket World Cup, which was brought to the Fair specially to promote the much awaited World Cup series happening in Australia and New Zealand in 2015.

While the big baddie of the season Raavan groggily saw them stand tall and take photos, little did he know that he and his team of ten heads were going to come to a fiery end in a short while. Yes, it was time for Raavan dehan and to let go of all negativity and embrace light and life. The pyrotechnics lit up the sky to mark the new beginning, the new start, the new year and of course to say Happy Deepavali! So has the Deepavali affair ended, or just begun?!