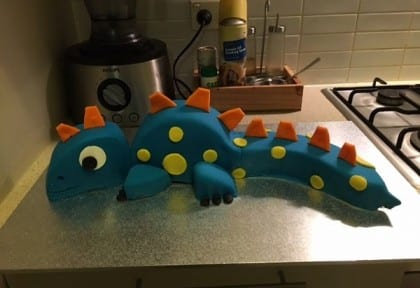 Cakes have evolved form being the plain spongy goodies, with or without icing, to glorious works of Art. Along with the art of cake making, cakemaking tools and techniques have seen a major creative shift in the recent past.

Manisha Malhotra, a Sydney mum of two and home baker, just proved the point solid that cakes can be a work of art. For her son Kabier’s third birthday, Manisha created a massive – and very cute- dinosaur cake.
“My dino-loving son wanted a dinosaur cake for his birthday and I just could not refuse,” Manisha told Indian Link.
She spent a good amount of time planning and researching on different dinosaur cakes to come up with her very own version.

“I spent nearly 15 days looking up pictures and planning that perfect prehistoric monster!”
The cake design finally sorted, Manisha set out gathering the ingredients and tools for it. “I recently went to the Cake Bake & Sweets Show held in Sydney, and had the chance to pick up a few ingredients,” she revealed.
Getting down to it, from baking to the finer finishing touches, Manisha spent close to five hours putting it all together.
Clearly, a lot of effort has gone into producing this beautiful cake.

Beneath that perfectly finished fondant exterior, are five delicious cakes that make up the dinosaur shape. “Two vanilla sponge cakes and three vanilla sponge sheet cakes were used to mould different shapes of the dinosaur from nose to tail,” Manisha revealed.
Besides rolling and shaping the gorgeous fondant for the exterior, Manisha used whipped chocolate ganache for the frosting and homemade raspberry sauce to keep the cake moist.

Interestingly enough, Manisha did not do a trial run for the cake. “I often celebrate monthly birthdays for my kids Kabier and Myra, my five-and-a-half month old daughter. I try my hand at different varieties, so I was pretty confident about this one.”
This busy Business Analyst enjoys cooking and baking for her young family. Her baked goodies especially go through a rigorous “Yumm or Yuck Test” by her toughest critics – the kids.

Reports are that it was definitely “Yumm” for Mum’s Jurassic creation.
“I was myself very pleased with the final output of the dinosaur project!” laughed Manisha. “Yes, I got a big tick of approval from my son, and the guests too.”
Even as she spoke with Indian Link, Manisha was wrist-deep into cake batter, making a batch of cupcakes for her local mums’ group fundraiser.
Will she take up baking on a serious basis?

“I am nurturing a dream to have my own baking business but not in the near future,” Manisha admitted. “Kids are my top priority at the moment.”
This crafty home baker shows us that with a bit of passion, interest and dedication, making an edible dinosaur can be a cakewalk too!