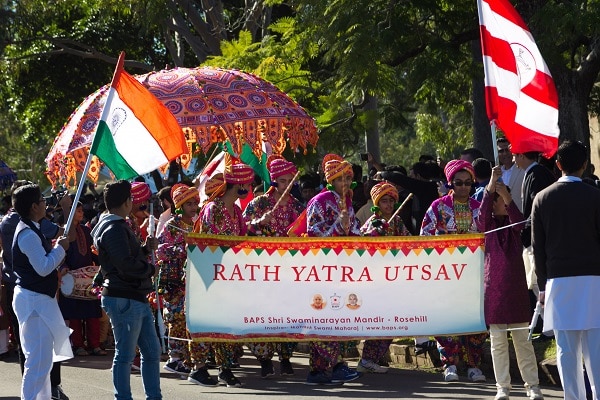 Amid devotional songs, colour and waving of flags, BAPS Sydney celebrated its Rath Yatra – a procession of chariots – on 25 June at Parramatta Park.

More than 2,000 devotees took part in the celebration in which images of deities are paraded on elaborately decked up chariots.
The celebration started with the singing of bhajans – devotional songs – with the accompaniment of Indian classical instruments. Chris Bowen (Federal Member for McMahon), Julie Owens (Federal Member for Parramatta) and Julia Finn (State Member for Granville) also joined the festive occasion along with community leaders. The dignitaries were given a traditional welcome by the spiritual gurus.
Sporting a red tilak (auspicious vermillion mark) on his forehead, Bowen spoke about the importance of community events and how the BAPS in particular plays an integral role in the development and strengthening of local communities.

Following a Vedic pujan ceremony and aarti, the devotees pulled the decorated chariot and paraded the images of Lord Swaminarayan, Aksharbrahma Gunatitanand Swami, Mahant Swami Maharaj and the deities of Jagannath temple – Krishna, Balram, and Subhadra Devi – with great fanfare and devotion. Children dressed up in traditional costumes, danced and played music to celebrate the Rath Yatra.
The celebration concluded with partaking of Mahaprasadam (sanctified food) for all those present.
The Bochasanwasi Shri Akshar Purushottam Swaminarayan Sanstha (BAPS) defines itself as a socio-spiritual Hindu organisation. According to its website, it has over a million followers across the world. BAPS has more than 1,100 temples around the world. The Sydney temple is at Rosehill.

The story behind the Rath Yatra tradition
Rath Yatra is a festival that Hindus have celebrated for thousands of years. It originated in the pilgrimage city of Jagannath Puri in the state of Odisha.
In the Hindu month of Ashadha that usually falls in June or July, the deities of the Jagannath temple, Lord Krishna, Balram, and Subhadra Devi, are placed in a colourful wooden chariot.
Devotees lovingly pull the chariots in a procession through the streets. Hundreds of thousands of people gather to perform puja of the idols by sprinkling rice and gulal, a festive pink coloured powder.
By some estimates, over a million pilgrims join the procession each year.

There are several theories, all rooted in Hindu mythology, about the origin of the Rath Yatra.
One story from a spiritual text, Shrimad Bhagavata Purana, goes that Kansa, the maternal uncle of Lord Krishna, wanted to kill Krishna and his elder brother Balram. Kansa invited Krishna and Balram to Mathura by sending a chariot to Gokul. Krishna and Balram climbed onto the chariot. This day, commemorating their departure, is celebrated as Rath Yatra.
Another legend has it that after Lord Krishna vanquished Kansa, he greeted devotees while sitting in a chariot with Balram in Mathura and hence Rath Yatra is celebrated.
A third story says that when Lord Krishna was in Dwarka, on the west coast of Saurashtra, he took his sister, Subhadra, around the beautiful city in a chariot.

Another belief that is specific to Jagannath Puri is that after Lord Krishna passed away, his bones floated to the shores of Jagannath Puri. Here, he appeared before the local king Indradyumna, instructing him to collect the bones, put them behind a wooden idol, and build a temple.