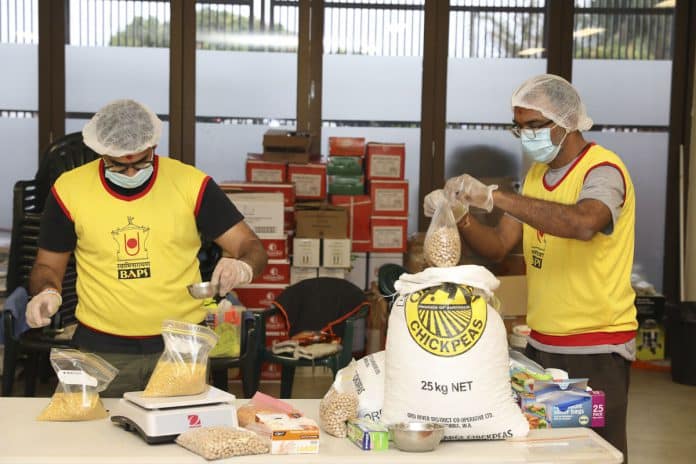 When stage-1 restrictions were announced by the Australian government a few weeks back, the BAPS Swaminarayan Mandir was already prepared. They had decided to continue their weekly congregation, a tradition across its 9000+ centres worldwide, through live streaming.

“This is one type of help that many people may not anticipate or appreciate, but it’s very important that we as a community feel connected and supported,” said Praful Jethwa, spokesperson for the mandir.

In the last few weeks alone, they have been joined by 5,000 families every week in Australia. Because of the smooth transition, they did not miss a single weekly congregation.

Although these assemblies are generally in the Gujarati language, they are also commencing assemblies in the Hindi language for the wider Indian community.

Recognising the huge job losses amongst casual workers, especially international students, the BAPS Swaminarayan Mandir’s centres in cities like Sydney, Melbourne, Perth and the Gold Coast started to create care packages. Aimed to last a family of four for two weeks, the packages are filled with grocery items like flour, oil, different types of lentils, biscuits, and long-life milk. So far, the organisation has distributed 7,000 kgs of raw food through these kits.

For people who might not have access to kitchen facilities, the organisation decided to help through cooked meals. They have served over 450 hot meals to date.

In Melbourne, the organisation has collaborated with the Northern Health Foundation to provide food kits to vulnerable patients and patients in mandatory isolation. Patients are provided with freshly cooked, vegetarian meals at their doorstep. A similar approach is being developed in Sydney.

They also emphasize the importance of blood donation to meet the demand of the current situation and have teamed up with the Red Cross for this initiative.

To commemorate Ram Navami last week, the organisation conducted a mahapuja to pray for the community, for those who are sick, and for those engaged in essential services.

“We are sitting at home with the warmth of our family members, but there are people who go out, on top of their job and family responsibilities, to do these sorts of things for people in need, irrespective of caste, creed, colour, and nationality,” said Praful Jethwa. The mahapuja was attended by over 3,000 households across Australia through weblink.

Although predominantly a temple community, the organisation believes in selfless service, especially in this difficult time.

The BAPS Swaminarayan Mandir is also willing to help Indians who are stranded here due to the travel ban.

“We can’t help with consular services or visa issues, but if people are seeking immediate assistance in terms of food or care packages, they can contact our number and will be supported by us,” Jethwa confirmed.

To contact the organisation for care packages or other assistance, please call Maitrik Thakkar 0430 120 078.