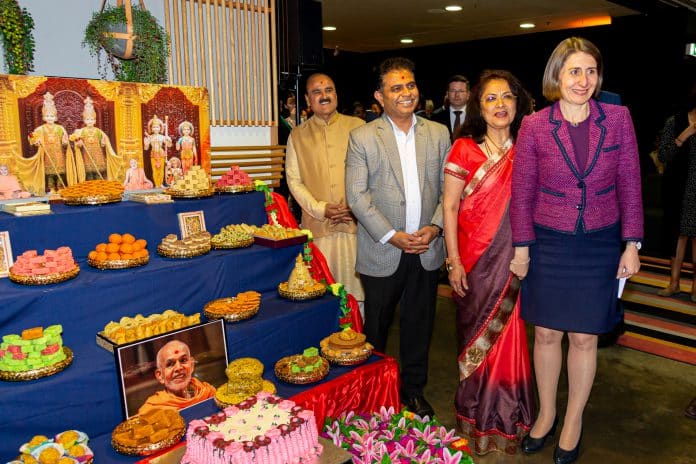 In what is set to be a spectacular end to the Diwali festivities and a remarkable start to the Hindu New Year, a massive ceremonial display of food is being planned at Rosehill Gardens by Sydney’s BAPS Swaminarayan community.

Known as ‘Annakut’, the event on Monday 28 Oct will see some 1500 varieties of food in a traditional offering to the deities, the centrepiece of which will be a 350-kg cake.

‘Annakut’ literally means ‘a mountain of food’, and that is pretty much what it will be, with each of the individual dishes prepared lovingly by the congregation.

It’s not your regular “bring a plate” though.

In a massive cooking enterprise – meticulously organised – community members across the city are currently involved in preparing the mega meal, working not only in the kitchens on the temple premises at Rosehill and at Penrith, but also from their own homes. The menu carefully planned months ago, everyone is allocated their particular item to cook, with quantity specified. The cuisine of each state of India is represented, as well as popular cuisines from across the world – all strictly vegetarian of course, in the BAPS tradition.

Cakes are a special item at this year’s event. Praful Jethwa, spokesperson of the BAPS Swaminarayan movement, told Indian Link as he described details, “The centrepiece item, the 350-kg cake, is an eggless fruitcake with laces of icing sugar. It takes the form of a book, representing our principle scripture, the Vachanamrut. In tribute to our adopted home, the cake decorations are inspired by Australian flora.”

The massive cake is but one of 200 cakes that are being prepared. The number is significant, Praful revealed, because the event marks the bicentenary of the Vachanamrut. The ‘cake project’ has involved no less than 23 cooks: additionally, community kids have lent a hand after school, moulding sugar flowers and decorations, nearly 6000 of them to date.

“A footfall of 7000 is expected, and we hope to feed our attendees three meals on the day, so some 21,000 meals will be served in all,” Praful revealed.

The food currently being cooked is all being stored in cold storage facilities specially hired for the occasion.

The display of the food items on the day is another massive enterprise in itself. The layout of the arrangement has been four weeks in planning, Praful revealed, with designs being made and refined.  (The mountain symbolism is seen elsewhere in the layout of the food as well – the mithai or sweetmeats are usually stacked up in circular tower-like arrangements.)

The design crew will have a very early start on Monday.

“The Rosehill Gardens venue will be made available to us at 3.00am. Our massive food trucks are scheduled to set off from their various locations at 2.30am and set up of the food display will commence shortly thereafter.”

No mean feat, laying out 1500 individual platters of food, all set to a predesigned floorscape.

Besides the food display, two exhibitions are also planned for Sun 27 and Mon 28 Oct. One of these, Understanding Hinduism, is created by kids and teenage volunteers for other kids their age. “The exhibition presents Hindu themes such as temples, idols, vegetarianism, our saints, our concept of evolution and concepts such as ahimsa and guru-shishya parampara.”

The larger interactive exhibition, Beautiful Borderless World, is a five-part presentation, based on the Hindu concept of Vasudhaiva Kutumbakam (The World is One Family). Without giving away too many details, the must-be-seen highlights here include a makeshift river, giant 10m x 3 m informative panels, a massive globe held aloft by hands, representations of some of the world’s greatest thinkers, and the over-arching use of grains and seeds in the artworks. The essential take-away: that borders are created in our minds.

A total of 550 volunteers in 33 different departments besides the cooking, are working round the clock to make it all happen: they will be looking after audio-visual, crowd control, traffic, decoration, logistics, first aid, outreach, police and media liaison.

Praful himself is volunteering in the outreach team with 25 others, looking after media and government liaison.

He observed, “Dedication and devotion on this scale outside India by young and all for such a cause of spreading joy is inspired by BAPS’s present spiritual leader His Holiness Mahant Swami Maharaj, successor of His Holiness Pramukh Swami Maharaj whose maxim was: In the joy of others lies our own, in the good of others abides our own, and in the progress of others rests our own.”

The tradition of Annakut has become a Swaminarayan mainstay all over the world. Essentially, it is a way of offering thanks to God for the comforts in our lives, and as such, is a great way of commencing the new year.

Join the Swaminarayan community at Rosehill Gardens this year to say Saal Mubarak.