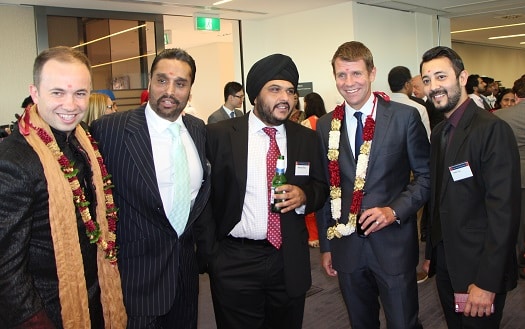 Reading Time: 2 minutesWith elections around the corner, the state politicians have been doing the rounds of the local Indian community.
At Premier Mike Baird’s meet-and-greet with the Indian community last month, the charm was laid on thick as some 200-plus community members attended.

Premier Baird took this opportunity to share with the community his official visit to India earlier in this year and also, his government’s India-engagement plan. Building on his meeting with Prime Minister Modi during Modi’s visit to Australia in November last year, Baird spoke about the desire to increase the NSW-India two-way trade which stands at $1.8 billion.
NSW has just 10 per cent of the two-way trade which at a national level was $11.9 billion in 2013, according to the Lowy Institute. India’s largest imports from Australia are coal and minerals. NSW does have a share of the coal export market but there is greater traction from Western Australia and Queensland and the student market which accounted for a large amount of commercial activity between NSW and India, still has to recover from the drop in student numbers since the student problems of 2008-09.
The regular India visits by former Premier O’Farrell and now by Premier Baird are a good sign that the NSW government understands that there is work to be done in attracting business from India and they are doing just that.
Premier Baird, while attending the global business summit Vibrant Gujrat, also visited the cities of Ahmedabad, Delhi and Mumbai. On behalf of the NSW government, Premier Baird entered into a new Memorandum of Understanding with Gujarat, the state of which Narendra Modi was the Chief Minister until his elevation to the post of PM.
“Mr Modi and I share bold infrastructure plans and the new MOU marks the start of a new chapter between NSW and Gujarat,” the Premier said.
As part of the MOU, a delegation of planning experts from Urban Growth and the Barangaroo Delivery Authority will travel to Gujarat to provide insights into sustainable urban planning as the Indian state grows and develops, Premier Baird told the gathering.
The Premier is confident that NSW has a lot to offer the Indian multinationals. “After all, NSW has a triple-A credit rating, a stable and diverse economy, a sound regulatory system and familiar systems of government, an innovative, knowledge-based industries, research and development credentials, a highly skilled multicultural workforce and a high quality of life.”
He shared that PM Modi commended the NSW Government for lighting up the sails of the Sydney Opera House for Deepavali last October and said it reflected the strength of the relationship between NSW and India.
“PM Modi was also keen to have the Harbour Bridge lit up this year,” he said with a wry smile.
He and other state Liberal politicians interacted warmly with members of the community. But for that tacky “love seat” which the event managers had brought in as a photograph back-drop, it was an evening where vision, politics and the Indian community in NSW got together.