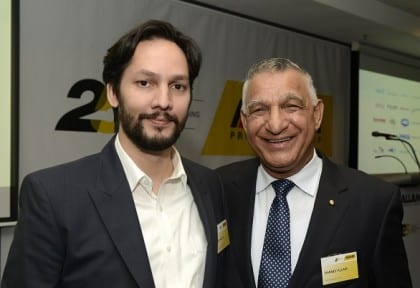 Allam Property Group recently held a special 25th Anniversary Function, in the heart of Penrith, to thank everyone who had contributed to the Group’s growth and success

In 1991 Bob Hawke was PM, up until December when he was replaced by Paul Keating, The Gulf War began and in August 1991 the first web site was launched.
While much closer to home, 1991 was the year that our own Penrith Panthers defeated Canberra 19-12 to win the 84th NSW RL final. To the beat of a much younger Tina Turner – singing Simply the Best the 42,000-strong crowd at SFS saw a first premiership win for the Panthers after trying since 1967.
It was also the year that Barney Allam, in the heart of Penrith, launched the Allam Property Group, an event that was recently marked with a special 25th Anniversary Function attended by members of the Allam family, along with many of Allam’s business associates, suppliers, contractors and past and present employees. And the venue was fittingly Peppers Stadium, the home of the Panthers.

The event was a great success and according to Barney Allam was an ideal opportunity to thank everyone who had contributed to the Group’s growth and success. During the evening Appreciation Certificates were presented to some key suppliers and contractors who between them represented some 750 years of service with Allam.
Barney Allam and the wider Allam business have been a part of the fabric of the Penrith Community since 1972 and today Allam are major long-term sponsors of the Panthers.
Since 1991 Allam have completed 5000 homes across Sydney, generating a massive amount of employment and sales revenue of $2 billion. An outstanding success story for this Penrith based business and Allam have big plans for the future.
Although the world may have changed since 1991, we’re reliably informed by Barney Allam, that Allam were then selling house & land packages, with a 3-bedroom home and garage on 500sqm selling for $115,000.
Today, Allam have estates in Sydney’s most popular growth regions, with estates also planned or soon under construction on the South Coast and Hunter.