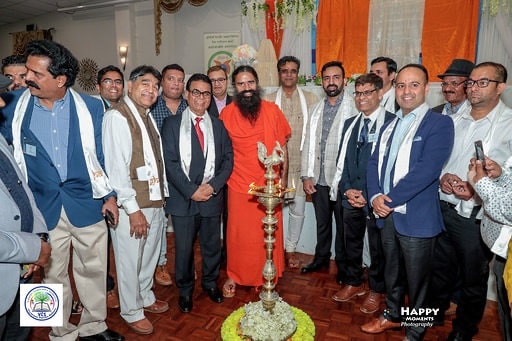 Swami Ramdev who was in Melbourne to preside over Yoga Shivir (Camps) and to lay the foundation of a Vedic Centre organized by Arya Samaj Australia launched Vedic Concept School and GHARS amidst prominent community leaders, organsiations and parliamentarians including Consul General of India to Melbourne Mr Raj Kumar and Mrs Kaushlaya Vaghela State Member of Parliament for the Western Metropolitan region.

Elaborating on the Vedic Concept School, Founder Mr Harpreet Bhardwaj said, “We are seeking to revive the ancient Vedic teachings and values within the community specially amongst our children through the Vedic Concept School. Character building is the main objective and we are beginning discussions with the VCE to see how to make it a part of the school curriculum in the future.”

“It is our honour to have Swami Baba Ramdev to do a pre-launch of both GHARS and Vedic Concept School in Melbourne. Our team is working on a technology platform that will cater for all the basic, spiritual and competitive needs of our members and allow them to interact, collaborate and contribute towards society and the environment in a sustainable way,” Mrs Raizada added.

Visibly excited to launch the Vedic Concept School Baba Ramdev who is world famous for his work in ayurveda, business, politics and agriculture, left the audience spellbound and inspired with his entertaining keynote promoting the Vedic way of living.

Highlighting the importance of ‘Karma’ (hardwork), Purusharth (Practice) and ‘Yog’ (Exercise & Unity) it is hard not to acknowledge his personal rags to yogi story and his ability to engage his audience, which besides Yoga, is one of the many reasons for his popularity amongst Indians wherever they may be.