Stranded Australians back home from India

Hungry but happy and relieved to be back: A surreal experience ends for one group of Australians, as many more wait to return home 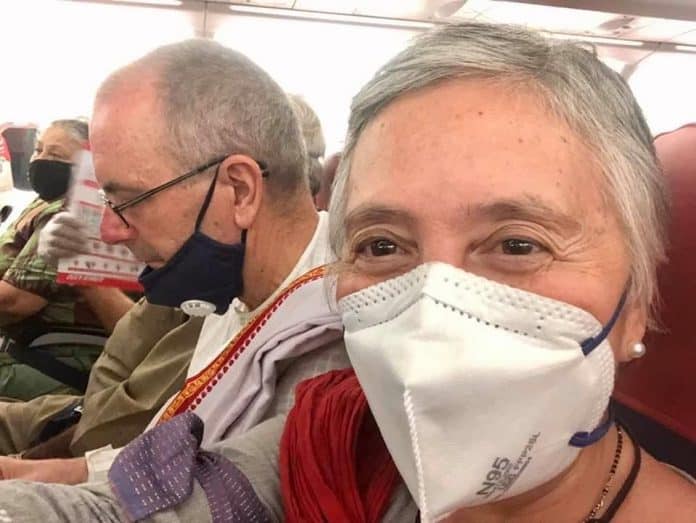 “It was a moment of joy and relief for my husband John and I as our chartered flight landed at Melbourne airport,” Francine Haywood told Indian Link as the chartered plane with 444 passengers touched down at Melbourne Airport last night 12 April, flying in from New Delhi.

For the hundreds on board and their families, it was time to finally relax. A homecoming like no other, this was the first repatriation effort to bring back Australians that are stranded in India amidst a country-wide lockdown.

What began has a Facebook group by Australian expat Simon Quinn in India, morphed into a whole repatriation operation with the Australian and Indian governments getting involved, including other well-wishers. Australian private aircraft leasing company Stratos Group Aviation and Australian private charter Monarc Global banded together to help these stranded Australians out of India. While Stratos Group helped with the leasing of the plane, Monarc’s contribution was to design the online ticketing system.

A private plane had to be chartered and one was accessed through Lion Air. The commerciality of this private venture was worked out where tickets were priced at $2,260 and then the mere logistics of getting travel cards issued in India for the 444 passengers who were stranded in a country in lockdown which allowed them to travel safely to the Australian High Commission in Delhi.

While the Australian High Commission and new High Commissioner Barry O’Farrell were able to help with the logistics, this being a private operation, they could not endorse the flight. The High Commissioner in his tweet did acknowledge the work being done by Simon Quinn to get this flight organised.

Haywood while wishing the government had moved quicker to help those stranded in India, is appreciative of the work which has gone on behind the scenes to make this trip back home possible.

A large number of Australians still seeking to return from India where they are stranded due to border restrictions in place to combat COVID-19 outbreak. More than 6,000 have already registered with the Australian High Commission seeking consular advice and assistance.

Media reports quoting the organisers say a total of 10 flights will be needed from Delhi, Mumbai and Chennai to get most of the Australians out, but this could be a long drawn out affair as at least three days gaps between the flights is required for logistical reasons.

Jagvinder Virk, chairman of the India Australia Strategic Alliance, who has been helping in organising this operation claimed that the toughest part was getting people to New Delhi from various parts of India due to the strict lockdown. There was, however, cooperation from Ministers, PMO and MEA and other relevant authorities from the Indian Government.

As the JT2846 landed in Melbourne applause rang out from all the passengers, thankful to be home safe. “I am looking forward to uniting with my family and friends once the 14 days quarantine is over. It has been a passage to remember,” said business magnate Param Virdi. He was stuck in India for weeks as he was overseeing operations in India when his manufacturing in China was shut down during the COVID-19 restrictions.

“With Air India flights being cancelled and not taking any further bookings and other Airlines ceasing operations there was a lot of anxiety on how we will get back. We were safe and locked in a hotel, however, given the uncertainty of how long this pandemic will last it was important for our peace of mind to be in our own home in Australia,” said a couple who did not wish to be identified.

Meanwhile the 444 that have just landed have made their way to different hotels allocated for their mandatory quarantines – exhausted, emotional yet excited to be home. The Victorian government has announced that all strict quarantine laws will be followed for the safety of all Australians.