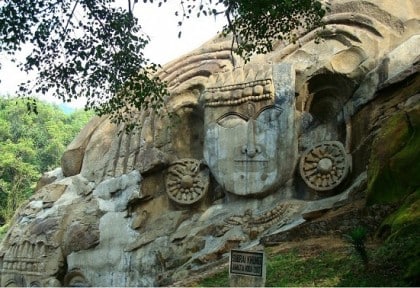 Debabrata shares his memories of Tripura

Tripura, one of the ‘seven sisters’ in north-eastern India, is home to 3.8 million people showcasing a peaceful blend of centuries-old cultures of diverse tribal and Bengali communities. It boasts scenic landscapes, and is surrounded by Bangladesh on three sides. My people have struggled with geographical hindrances – getting our first broad-gauge rail connectivity from Delhi only this July. Yet this remote hilly land has already won the crown of the ‘most literate state’ in India, besides holding another national record: we have recorded the highest ever voter turn-out in exercising our democratic rights. Amongst many of our tourist attractions, the hill of Unakoti near Kailashahar town (some 178 km towards north from the capital Agartala) deserves a special mention. This lost heavenly world of Lord Shiva, with one less than 100 million stone sculptures of Hindu Gods and Goddesses engraved in hilly rocks, dates back to the 7th-9th centuries. These gigantic rock carvings resting on the lap of hilly Tripura silently portray many interesting tales from Hindu mythology, attracting thousands of pilgrims to visit daily.