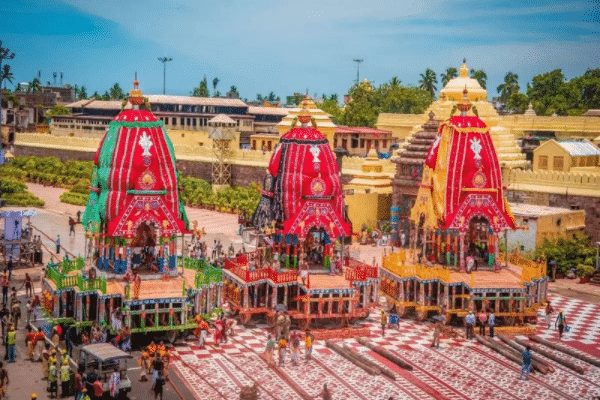 Our Puri Jagannath Temple and the Ratha Yatra are known all over the world. Puri is one of the four sacred places of pilgrimage for Hindus. The Konark sun temple and the leaning temple of Huma in Sambalpur stand as the testament of its architectural and artistic marvel. The classical and folk dances such as Ghumura, Odissi and Chhau speak of its performing arts culture. We are also known for our palm leaf paintings, sand art, applique work and silver filigree.

Orissa, or Odisha is a coastal state in Eastern India. It is famous for the Jagannath Temple in Puri and the Ratha Yatra in the month of July. Jagannath Temple is one of the 4 sacred places (char dhaams) of pilgrimage for Hindus. The presiding deity of the temple is Lord Jagannath who is an incarnation of Lord Vishnu.

There are many interesting facts about the temple and its deity. For example, once a year during the rainy season (Asadha), Lord Jagannath leaves the sanctum of the temple and comes out on the streets of the holy city of Puri, driven in a massive chariot, so that all his devotees who are unable to see him inside the temple can get see him. The holy city is also the birthplace of the world-renowned ISCKON movement.

READ ALSO: Wondering where to buy Indian flags in Australia?