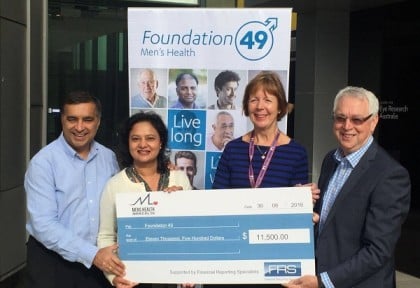 For one Sydney couple, men’s health has become an incredibly important cause after close encounters with life changing illnesses

Every hour at least four Australian men die prematurely from potentially preventable illnesses. The most common types of avoidable conditions causing death among men are heart disease and cancer.
Heart disease remains the number one killer among men. Four Australian men have a heart attack every hour and one man dies of a heart attack every two hours.

Despite significant improvements in detection and treatment, prostate cancer remains, by far, the most commonly diagnosed cancer among men. More men succumb to prostate cancer than women to breast cancer, yet fewer men are willing to talk about prostate checks.
Sydney couple Vik and Bhavisha Bhandari are on a mission to encourage all Australian men to take charge of their own wellbeing. The pair want to take the topic of ‘balls’ to boardrooms and BBQs, to raise awareness of men’s health and inspire men to get an annual health check-up.


The Bhandaris recently launched their black-tie community fundraiser the Men’s Health Awareness Ball. Held during Men’s Health Week, the gala charity event raised $34,000, the proceeds of which were directed to the Prostate Cancer Foundation of Australia, Heart Foundation Australia, and Foundation 49 Men’s Health.

The couple were shattered a few years ago when Vik’s healthy father suffered a debilitating stroke. Not long after, Bhavisha’s father also experienced an unexpected health crisis.
“My dad always said he was ‘as fit as a fiddle,’ and never went to see a doctor,” Vik Bhandari told Indian Link. “He was a teetotaller, practised yoga, was neither overweight nor obese, and yet he is now paralysed on one side. Unfortunately, we’ve also had immediate family members die of heart failure that could have been avoided. Several men in our lives, including Bhavisha’s father, have illnesses now, which may well have been prevented or the severity decreased, had they visited a doctor regularly.”

The common thread is that each of these men believed they were perfectly healthy – not bothering to undergo an annual health check-up. Men are less likely than women to talk about health issues, until there is a problem.
“The idea behind having the Ball is to raise awareness of the importance for men to get a health check, at least once a year, and to build a rapport with their general physician,” said Bhavisha Bhandari. “It’s just that simple. They’re not that scary. Very often men ignore niggling signs such as pain or general malaise because they are ‘too macho’, ‘too busy’ or ‘too darn afraid’ to do anything about it.”

She went on, “Men should be encouraged to talk about their health socially among friends and colleagues, whether it is with mates at a BBQ, or with co-workers and business associates in the boardroom. We want men to live longer, happier and healthier lives so that they can be there for their loved ones.” The Bhandaris are deeply committed to raising such awareness one ‘ball’ at a time.
At the recent inaugural Men’s Health Awareness Ball, guest speakers included Associate Professor Manish Patel, urologist and prostate cancer surgeon; Dr Kevin Hellestrand, cardiologist; and Nick Lee – founder and CEO of national bowel cancer prevention charity, The Jodi Lee Foundation. All stressed the importance of adopting lifestyle choices that are pre-emptive rather than preventive.
Owing to the success of the inaugural ball, which proved to be fun, engaging and educational, the next event will be held during Men’s Health Week 12-18 June, 2017.
For further information, visit www.menshealthawarenessball.com
- Advertisement -
Share
WhatsApp
Facebook
Twitter
Linkedin
Previous articleAn association of Indian Muslims
Next articleRio Olympics: Team India update