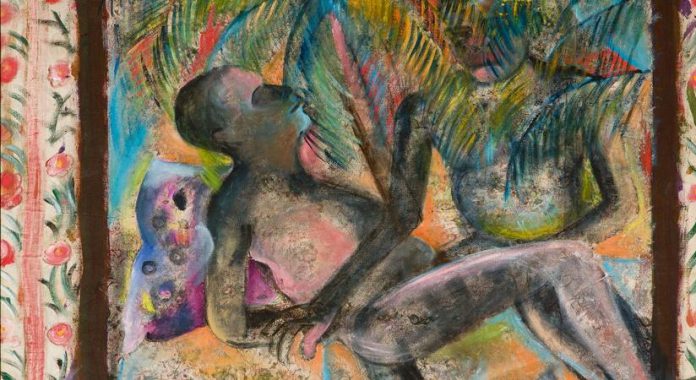 Sotheby’s  announced highlights from its annual auction of Modern & Contemporary South Asian Art which is set to take place on the 16 March in New York.

As luck would have it 95 percent of the works are from private collections. The auction is led by two 1960s paintings by pioneer Indian abstractionists Nasreen Mohamedi and Vasudeo S. Gaitonde. It also features an important work by Indian National Treasure artist Raja Ravi Varma; a selection of sculptures led by modernist works by Amarnath Sehgal and Adi Davierwalla; a curated selection on Neo-Tantra, including works by Biren De, G. R. Santosh and more; and a diverse selection of works from the Bengal School of Art as well as Modern and Contemporary art from Pakistan.

“We are thrilled to continue our strength in presenting fresh material to collectors worldwide, with almost our entire March sale featuring material that is either newly discovered or has remained in esteemed private collections for decades. We are pleased to lead this season’s sale with Nasreen Mohamedi’s incredibly rare work, Untitled, from the 1960s— in my 17-year auction career, this work marks the first time I am handling a canvas of this size and scope by the artist. It is truly a privilege to feature this work alongside a complimentary painting by Mohamedi’s friend and mentor

“25 years ago, Sotheby’s held its first dedicated auction of Modern and Contemporary Indian Art, featuring the legendary collection of Chester and Davida Herwitz. I am immensely proud to continue to bring fresh and exciting property to the market. Our upcoming auction features art that has never been on offer and was originally acquired by collectors with a passion for South Asia’s rich heritage and art. From a Gaitonde work with a connection to Dr. Homi Jehangir Bhabha, to an alluring Mohamedi work previously owned by Peggy and Robert Matthews, and a fantastic collection of art acquired by Marcia Gilmartin including rare and never-before-seen works by Zarina, this sale offers a variety of riches for the discerning collector,” said Manjar/ Sihare-Sutin, Head of Sotheby’s Modern and Contemporary South Asian Sales in New York.

The March auction is highlighted by two works by pioneer Indian abstractionists who shared a studio in Bombay as students, led by Vasudeo Santu Gaitonde’s Untitled from 1963. Appearing at auction for the first time, the work was previously in the collection of Ruth and Robert Marshak for over half a century after the couple acquired the work directly from the artist in the 1960s (estimate $1/1.5 million). A world-renowned physicist, Mr. Marshak was invited by close friend and physicist Dr. Homi Bhabha — considered the father of the Indian Nuclear Program — to lecture at the Tata Institute of Fundamental Sciences (TIFR) in India. The Marshaks began learning about Indian art and acquired the work of Gaitonde, who Bhabha often promoted and featured extensively in the TIFR Collection. Works from the collection of

Ruth and Robert Marshak stand as a testimony to the friendship of these scientists and humanists who represented the best of modern science and the arts of their time.

Renowned as India’s pioneering abstract artist, Gaitonde painted only five or six works a year, with each painting representing a specific and dedicated relationship of form, color, and consciousness. Gaitonde began his career as a figurative artist, however, by the early 1960s, he began to work towards stillness in his paintings through a meticulous approach to line and color. Some of Gaitonde’s early non-objective paintings evoke the feeling of a landscape, especially his canvases of the early 1960s where gradations of color and geometric forms coalesce almost as a ‘horizon line’ as seen in the present work.

Appearing at auction and exhibited publicly for the first time this spring after remaining in the same private collection for over five decades, Nasreen Mohamedi’s Untitled, circa 1960s, was originally acquired in Bombay by American patrons Peggy and Robert Matthews in 1963 before it was gifted    to    the    present    owner    in    2018 (estimate

$200/300,000). Peggy was the Midwest editor of Mademoiselle magazine in Chicago, and Robert an executive in an office furniture business until 1962, when the pair resigned from their jobs to travel the world. After spending months traveling to the Middle East, India, Pakistan, Japan, and more, they met gallerist Kekoo Gandhy and Nasreen Mohamedi in 1963, and acquired the present work. Celebrated as a pioneer of minimalist abstract art in India,

Mohamedi developed a form of abstraction while working within a community of artists in India, including V.S. Gaitonde. In its commitment to abstraction and composition, the present canvas reveals Mohamedi’s indebtedness to her mentor and fellow-artist Gaitonde.

Raja Ravi Varma’s Untitled (Swami Vishvamitra in Meditation) formerly in the collection of German printer Fritz Schleicher, is among a very limited body of this Indian National Treasure artist’s work that is in free circulation outside India and available for acquisition by international buyers (estimate $700/900,000). Although Varma made his fortune as a master portraitist for royal society in India, he achieved fame as a pioneer of popular culture, responsible for the mass dissemination of a new visual vocabulary through oleographs. In 1894, after producing a large number of oil paintings, Varma founded India’s first oleography press, and by doing so succeeded in making his artwork accessible to the public by revolutionizing its placement into lay households. To create these reproductions, Varma employed Fritz Schleicher to manage his workshop, eventually selling the printing press to Schleicher in 1903.

The present work depicts Brahmarshi Vishvamitra in meditation. A former king who renounced his thrown to become a famous and much venerated sage in Indian history, Vishvamitra is credited with writing a significant part of the Rigveda, the oldest and most sacred collection of Vedic hymns composed in Sanskrit. In this painting, the artist melds the tenets of Indian mythology while incorporating the contrast, detailing and color palette of an Old Master painting.

Painted in 1993, Bhupen Khakhar’s In the Coconut Groves was previously exhibited at the Tate Modern in London at his retrospective titled Bhupen Khakhar: You Can’t Please All (estimate $200/300,000). Renowned as India’s first Pop artist, Khakhar was recognized for pioneering tender and witty portrayals of life as he encountered it, and often considered his own homosexuality — a particularly courageous gesture at a time when homosexuality was still largely unseen in the Indian public sphere. Throughout the 1980s, Khakhar’s canvases became increasingly complex, with an increased focus on visual and narrative depth. As he began to suffer from cataracts, the artist loosened his

brushwork, leaning towards compositions focused on central figures as seen in the present work, centering on an amorous encounter between two men in a lush tropical environment, while a third face (with a resemblance to Khakhar) at the bottom of the picture, looks at the viewer.

The auction is further highlighted by Maqbool Fida Husain’s Mehndi, painted in 1962 (estimate $100/150,000). India’s best- known and most controversial painter, Husain was likely the most prolific artist of post-independence India. His work depicted with great breadth the epic and every day with breadth and poignancy, defining an image of modern India through representations of great tales such as the Mahadharata, Hindu Goddesses, and quotidian objects and figures imbued with symbolism.

Additional works by Husain will highlight the sale, including Untitled, depicting many of Husain’s well-known symbols and iconography including the masked woman and the poised nude

(estimate $30/50,000).  On offer from the collection of Marcia Gilmartin, wife of economist  William

M. Gilmartin, who served two tours in India as the Resident Representative of the World Bank. The couple amassed a collection of Contemporary Indian artworks in Delhi throughout the late 1960s and early 1970s.

READ ALSO: Jane and Kito de Boer own one of the largest and most varied private collections of Indian art

- Advertisement -
Share
WhatsApp
Facebook
Twitter
Linkedin
Previous articleAussies will have edge over India in their next Test series: Waugh
Next articleSay ‘I Do’ at these Stunning Celebrity Wedding Destinations