Smart and savvy, or shy and nerdy? 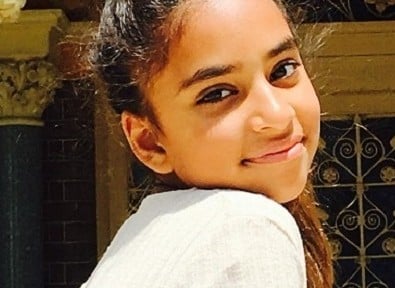 As a young child, Vani Dhir had once written on a wish list that she would like to be on television one day.
Well, her dreams have come true with a role in Australia’s longest-running drama renowned for depicting the good, the bad and the endlessly entertaining lives of the residents of Ramsay Street in suburban Melbourne.

Thirteen-year-old Vani plays Kirsha Rebecchi, the youngest daughter of the newly arrived family in Neighbours.
Vibrant and talented, Vani says she is the opposite of the shy, anxious and nerdy character she portrays in the show.
“For as long as I can recollect I have always been a performer, doing random things on stage, at family functions, at home and at school, and I have always wanted to act,” Vani tells Indian Link with confidence belying her age.
“I was happy and thrilled to get this role as I am now doing what I love and enjoying every bit of it,” she reveals.
“I wish I could be filming everyday but I have to go to school,” she smiles wryly.
Vani’s routine varies depending on her shooting requirements. Some scenes require two to three weeks; others take a day, but all her shoots wrap up in a couple of hours, according to Vani.
The outdoor scenes are shot at Pine Oak Court in Vermont South, the setting of the fictitious Melbourne suburb of Erinsborough and the rest are filmed at Television Studios in Forest Hill.
“My school has been very supportive and I get to catch up with any work that I may miss,” says the Year 8 student at Haileybury in Keysborough.

Vani’s parents Jessica and Mohit Dhir are medical practitioners who moved to Keysborough five years ago from Frankston to be closer to her school.
Vani is the youngest of three siblings. Her sister Sakshi is 22 and brother Sahil is 18.
“We are very happy and proud of Vani,” her mum Jessica says.
“The school has been very supportive and Vani understands that she cannot ignore studies as her primary goal,” she adds, when asked how she feels about Vani’s catapult to fame.
“As parents we sometimes tend to overthink,” Jessica admits. “We had our initial concerns about the impact on her studies, the exposure and cultural considerations, however, it is working out very well so far.”
According to Vani’s parents she has been entertaining friends and family from a very young age, always initiating and participating in acts, skits and other performances at family events.
“That is the reason we had her enrolled in the Young Australian Broadway Chorus (YABC) stage school through which she got to audition for this role with Talent Company Australia.”

“Vani is super excited about the role and she is very well looked after on the sets. The show crew ensures her safety and wellbeing and we are consulted prior to any scenes that may have unusual or sensitive themes,” Jessica reveals, and her now famous daughter agrees.
“I was really nervous in the beginning but the crew explained everything and we did not dive into shooting from day one. I had an orientation that involved drama classes, costumes, meeting other cast and crew and the director, and a drive around the location of external shoots,” she shares.
Early days of filming were nerve-wracking for Vani, but she got used to it quickly and developed a great rapport with her onscreen family.
“Sharon Johal (who plays mum Dipi) is amazing and I have connected very well with Olivia Junkeer (sister Yashvi). It’s like we are real sisters,” Vani says enthusiastically.
“It’s great to be part of a family that breaks through stereotypes and depicts the diversity of a multicultural Australia,” the young actress says.