This stand-up comedienne will make you laugh, then get you thinking 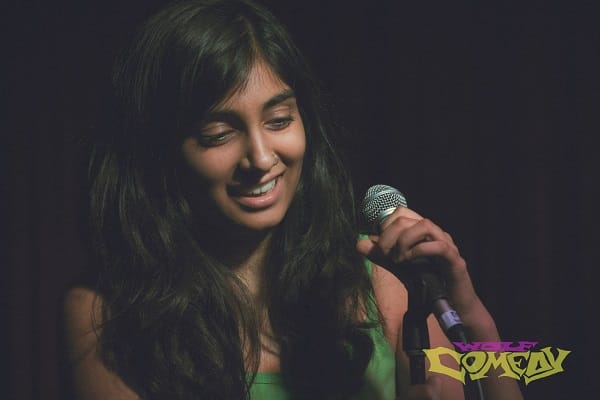 The first time I saw Shubha Sivasubramanian perform on stage was at the unlikeliest of places, the Manning Bar in Sydney University. An establishment that’s infamous for serving overpriced, corporatised, yet decidedly tasteless food choices to whoever walks in through the door, it’s a place where you’re more likely to find university students drinking away their anxieties post exams than any kind of genuine comedic talent.
And yet, there was Shubha. If you look at it from a prophetically cosmic perspective, it all makes sense. Because if there is one thing that has been true about her approach to doing comedy so far, it’s that she is more than willing to change things up – disrupt the play – and come at tried and tested subjects from a completely different angle than what you would expect. This approach remains her greatest strength as a comedienne and one that is on full display in her latest stand-up show Hive Mind.
Author Finley Dunne, upon referring to the duty of newspapers towards the reading public, opined that they should “comfort the afflicted and afflict the comfortable.” Shubha readily applies this dictum to the comedic sphere, making the familiar and everyday seem at once absurd and unfamiliar; the mundane and likely seem farfetched and unlikely.
Her latest show is as much a showcase of her increasingly refined comedic sensibilities as it is an evolving dialogue about how we ought to live and what it means to be a good person. But wait, hang on, isn’t this meant to be a stand-up comedy show? What about jokes?

Don’t sweat, the jokes are there. But, it almost feels a disservice to a comic when their entire art form is somehow arbitrarily reduced to the number of laughs they can generate. As if, that’s all they can do, or worse, that’s all they are meant to do.
If anything, Indian audiences should be more attuned to the ambitions and many faces of a comic: we have a tradition of hasya kavis and Urdu mushairas where accomplished poets would impart social commentary through their words.
Shubha tackles many topics, traversing diverse subjects such as philosophy, religion and even dinosaurs with ease (yes, you read that right). She moves between nonchalance, irreverence, deadpan and serious in a sentence and at times, it can be a challenge to stay with her. However, if you look beyond the seemingly unintelligible and absurd connections her hive mind is able to make, there are many layers to unpack in her humour.
For example, when she explains the major religions of the world through social media hashtags, instead of taking the obvious route of punching down on religion, she makes a more nuanced observation of how lost we all are in today’s world and in desperate need of guidance.
And this nuance is what stays with you when the curtains draw. One of the major highlights of the show was Shubha’s thematic throughline of being true to yourself. And she illustrates this by using personal examples of women in her family and what they have gone through to make a broader political observation about the treatment of women in India and the world. Yes, the show leaves you with plenty of laughs but more importantly, with a lot more to think about.

For Shubha, the answers to some of the most profound questions – why do we need perfection, where does maturity come from and why you can’t be an atheist and also like dogs – often come from accepting your place in the world. It’s a disarming diagnosis of postmodern anxiety where everyone seems to be in a rush to be better than the next person.
Hilarious, incisively witty and deeply profound, Hive Mind signposts the coming into her own of a talented young performer.
Shubha Sivasubramanian is ready for her close-up.