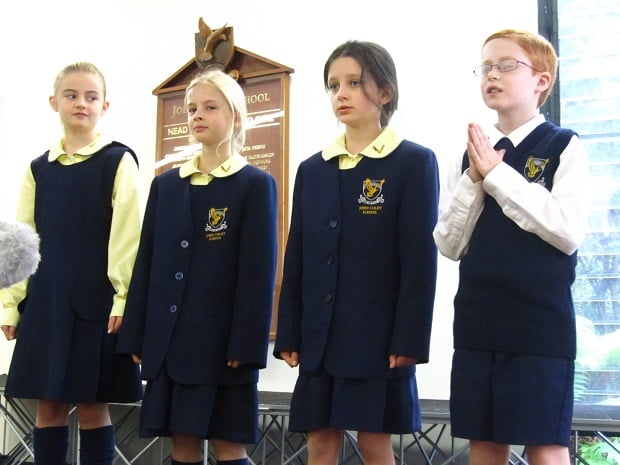 Om Paramatmane Namaha – a typical day begins with this dedication to the Supreme Being. It is followed by a few minutes of silence and mindfulness meditation, before starting a structured learning programme. The day concludes similarly. Sanskrit grammar and shloka chanting feature prominently on the educational agenda, as do ethics, values education and lessons in philosophy. Strong emphasis is laid on cultivating respect for one another, taking ownership for actions as well as service to society. At lunchtime, following the principles of Ahimsa, all staff and students sit down to a wholesome vegetarian meal.

This is no gurukul in remote rural India but a thriving learning environment in Belrose on Sydney’s Northern Beaches. Ancient classics, modern languages, Shakespeare and studies of world religion and culture coexist with other key learning areas.

Embracing a multi-lingual, multi-faith model, John Colet School (JCS) has a wide footprint across the greater Sydney area, offering an alternative learning pathway to the forward thinking community for many decades now.

“Every parent wants his or her child to be a good person first and then get a great career as well,” principal Gilbert Mane, told Indian Link. “We try to achieve both by giving them a taste of self-awareness and encouraging a common sense approach. Our formula for success is an equal emphasis on spirit, character and academics. We empower students to be strong, confident, compassionate and courageous individuals”.

Mane explained the school’s aim to nourish both “minds and hearts just as the best physical food nourishes the body”.

“The diverse cultural experience of classical and modern languages opens them up to the rich variety of humanity and human experience,” Mane noted. “Sanskrit, in particular, is very beautiful and profound and this is good for the wellbeing of the child. It gives children the opportunity to experience and enjoy the purest sounds in language as well as gain a good foundation in linguistics, grammar and logic”.

All students from K-6 learn Sanskrit, starting with simple prayers, to learning to read and write Devanagari script before mastering vocabulary and grammar. A thorough understanding of its fully inflected grammatical system is gradually acquired through several lessons a week over their years at the school. Once the foundation is laid, students tackle translation, using simple stories from Ramayana and Mahabharatha.

“Catch up” lessons are offered to students who join the school. Advanced students also elect to sit the ‘11+ International Sanskrit Exam’ (set by St James School London through the Cambridge Examination Board).

Similarly Latin is offered as an enrichment programme from Year 1. All students also participate in a class Shakespeare play every year. Drawing from a range of cultural and religious traditions, readings from various scriptures is a daily ritual as is exposure to artistic influences, including Indigenous, Islamic and western art movements like Impressionism and the Renaissance.

“Proper language study demands discipline, attention and order,” explained Mane. “This in turn develops self-esteem in the child because they have studied something innately challenging and achieved success, even if it is only learning some simple prayers by heart”.

Mane believes that once students have“learnt how to learn a language like Sanskrit, they find the learning of other languages relatively straight forward”. He went on to joke that Latin is a modern language, due to Sanskrit being much older. “Sanskrit study combines certainty with creativity,” said Mane. “Understanding Vedic culture promotes both. On a practical level, they understand how language works and use this to extend their understanding of text types. They also gain a subtle sense of different realms of thought. What follows are wonderful discussions and acute awareness of diversity of human race”.

The JCS students are the school are naturally understanding and tolerant of differences. “There are, of course, always lessons to be learnt but generally the children are ‘colour blind,’” Mane proudly acknowledged.

For the teachers as well, it is a highly fulfilling process as it places high demands on them to make learning interesting, fun and achievable.

JCS students recently participated in the annual Sanskrit competition. Following the oral tradition, the entire school was involved in individual and group recitation.

“All classes learn a different group recitation piece, either a prayer or a series of slokas,” explained JCS’s Alex Coubrough.

“They learn them by heart and recite together in unison, focusing on intonation and correct pronunciation, a skill in itself,” she added. “This means everyone, regardless of ability, can join in”.

Finalists are selected from every grade, with scholars from the University of Sydney’s School of Philosophy, Ramakrishna or Chinmaya Mission, as well as retired teachers, judging the competition.

Both for the quality of sound and performance of groups and individuals, this year’s competition was the best yet, making judging a difficult task for respected virologist and Sanskrit scholar, Dr Gary Grohmann and languages teacher, Ineke Blakeman, Coubrough pointed out.

The Lower 1st class won the competition in the Infants division for their recitation of Happy Prayer, with gestures of animals representing all creatures, which was incorporated into the English translation.
The Primary award went to 3rd class for their perfect recital from Eesha Upanishad. Individual winners were Joshua J, Wilhelmina Van D and Iona from Infants and Luke B, Felicity V and Elliot M-K in primary division.
Elliot’s achievement was particularly special as he only joined the school this year. “He has taken to Sanskrit so naturally,” explained Coubrough. “He loves it! This has happened with other new students in the past, they have caught up to their class mates within a few months”.