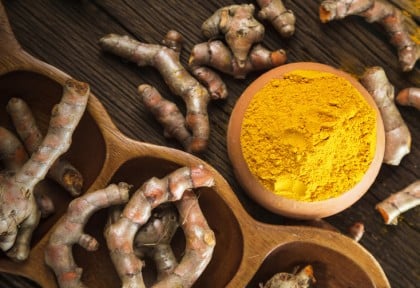 Turmeric is touted to have many benefits, such as reducing inflammation and preventing cancer writes GUNVEEN KAUR, Deakin University

Turmeric is a yellow coloured spice widely used in Indian and South East Asian cuisine. It’s prepared from the root of a plant called Curcuma longa and is also used as a natural pigment in the food industry.
In the literature, curcumin is reported to be an antioxidant that protects the body against damage from reactive molecules. These are generated in the body as a result of metabolism and cause cell damage (known as free radicals).
It’s also reported to have anti-inflammatory, anti-bacterial and anti-cancer properties, as well as encouraging the death of cells that are dangerous or no longer needed by the body.
Curcumin has been widely studied in relation to numerous ailments, but what does the literature say? Is consuming turmeric beneficial?

For aches and pains

Chronic inflammation has been linked to the development of numerous diseases such as obesity, diabetes, heart disease and cancer. There is some evidence curcumin reduces the levels of certain substances (cytokines) that produce inflammation.
Systematic reviews and meta-analyses, which combine data from several randomised controlled trials (where an intervention is tested against a placebo, while the subjects and those conducting the study don’t know who has received which treatment) support this finding to a certain extent.
A meta-analysis of nine randomised controlled trials showed taking curcumin supplements led to a significant reduction in cytokines that produce inflammation. But the authors claimed these reductions were modest, and it’s unclear if they would actually have a benefit in real life.
These trials were conducted with small sample sizes ranging from 10 to 50 people, which reduces the strength of the evidence. It’s difficult to draw a conclusion on a beneficial dose and how long you should take curcumin, or the population group that can benefit the most from curcumin.
A meta-analysis investigated the effects of turmeric/curcumin on pain levels in joint arthritis patients. The group supplemented with 1000mg of curcumin per day said they had reduced pain compared with the placebo group.
In this study, curcumin was found to be as effective as ibuprofen in terms of reducing pain levels in these patients. But the authors of this meta-analysis themselves suggested that due to small sample size and other methodological issues there is not sufficient evidence to draw definitive conclusions.

For diabetes and heart disease

Curcumin is also thought to be beneficial in preventing insulin resistance (which leads to increased blood sugar), improving high blood sugar and reducing the toxic effects of high blood glucose levels.
But these studies have been conducted in animals and are very few human trials have been conducted in this area.
One study that reported reduction in blood glucose levels in type 2 diabetes patients reports a change in blood glucose from 8.58 to 7.28 millimoles per litre after curcumin supplementation. People with levels above seven are classified as diabetics. So in clinical terms, the change is not that much.
Similarly in relation to heart disease, animal studies show benefits of curcumin supplementation in improving heart health, but there are very few clinical trials conducted in heart disease patients.
Smaller clinical trials looking at ten patients also show benefits of curcumin in reducing serum cholesterol, which is a risk factor for heart disease. But meta-analysis looking at combined effects of different trials does not show these benefits.

Curcumin has also been widely studied in relation to its anti-cancer properties. Laboratory and animal studies support this claim, but the evidence for cancer prevention in human trials is lacking.
Although there are some small studies (in 25 cancer patients) that showed reductions in precancerous lesions, and two patients showed shrunken tumors, this small number is not enough to conclude anti-cancerous effects of curcumin.
There is some evidence curcumin lessens the severity of side-effects from radiation therapy such as radiation-induced dermatitis and pneumonitis (inflammation of lungs), but not the cancer itself.

Research shows not all curcumin we take orally is absorbed. This has led to the use of other things such as lipids (fats) and piperine (found in black pepper), to help it absorb into our system.
High intakes (up to 12 grams a day) of curcumin can cause diarrhoea, skin rash, headaches and yellow-coloured faeces. Looking at the Indian population, they consume about 100mg of curcumin a day, which corresponds to 2 to 2.5 grams of turmeric per day.

But they also consume these amounts over relatively long periods of time (typically their lifespan). There are reports of lower cancer rates in the Indian population and this has been linked to turmeric consumption, but there are no longer term trials proving this link.
It appears that in order to receive benefits from high doses over a short period of time, people are now resorting to injecting turmeric intravenously. There is no evidence to support the benefits of high doses of turmeric or IV injections of turmeric at all.
In fact, at very high doses, curcumin’s predominant activity switches from antioxidant to pro-oxidant, which means rather than preventing cells from damage, it promotes cell damage and has also been reported to cause tumours in rodents.
Although curcumin is showing some encouraging effects in reducing markers of inflammation in humans, the majority of the pharmacological effects of curcumin are in lab studies or animal experiments. Until there are more high quality randomised controlled trials conducted to confirm the benefits of curcumin or turmeric, it’s best to consume turmeric orally as a spice as part of a healthy, nutritious diet.
Gunveen Kaur, Lecturer In Nutritional Sciences, Deakin University
This article was originally published on The Conversation. Read the original article.