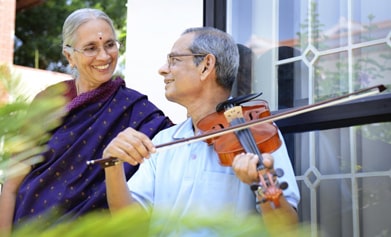 “Get with it, Amma!” cajoled a youthful voice at the local park. I turned around and was treated to the sight of a young teenager coaxing her elderly grandmother to walk faster, while the poor dear struggled to catch up. “You go ahead, beti”, said the lady, spotting an enticing space to rest her ample bottom on the bench where I was resting mine. “Okay”, came the cheerful reply and off she trotted in her hot pink shorts, adjusting her earphones that were already releasing some modern cacophony. “Aaah!” said Amma, with an audible and satisfied sigh of relief. She turned to me and said, “These young ones, they have too much energy”. And as happens, that was the prelude to an interesting and enlightening chat.

Amma is in her early 70s. She’s been in Australia living with her son for the past five years or so, ever since her husband passed away in India. She left her family and friends back there because her children (who are settled here) wanted to take care of her. She mentioned this with a delightful sense of irony. Amma insisted that to begin with, she was bored and homesick. But she didn’t want to upset her immediate family who thought that she would be incapacitated without them, having been a housewife all her life, while her professor husband brought in the pay packet. She cooked the family meals, until they started complaining that she used too much ghee. She looked after the grandchildren, but they soon grew up and wanted to be independent. Then by chance, visiting one of the popular Indian melas in Sydney, she met an old friend whom she hadn’t seen for a decade. This charming senior took Amma under her wing, and soon these two ladies were painting the town delicate shades of pink. Her friend had been here longer, and had a car. Hurrah! This meant freedom. She was a widow too, but she had a little granny flat in her son’s home with a separate entrance. More freedom! Amma was suddenly exposed to a completely different and independent life. Granted, it wasn’t her own, but she could see and appreciate the brighter side of living in Australia. Now Amma, with her allegedly inhibited life, could have found all these new discoveries daunting and retreated to a safer environment of the comfort zone she knew and was familiar with. But instead, she decided to explore the options this country offered. Gradually, the two ladies had a new routine. They started going to yoga classes together. The family was relieved, they had been concerned about Amma moping around the house with little to do. As the months went by, Amma got bolder. She met other seniors, she attended various musical and drama events organised by the community. Her circle of friends became wider. On her birthday, her family gave her a smart phone. Amma is now a pro at using Viber and Skype. She has many goals like losing weight, and doing aqua aerobics for her arthritis. She wants to visit Cairns and see the Great Barrier Reef. She wants to go back to India for a reunion with her closest friends – followed by a tour of north India. But most importantly, she’s happy. I’m telling her story because as she walked away adjusting the dupatta on her cotton salwar khameez, and getting into a stride in her spotless Asics, I was filled with a sense of admiration. It’s not a new feeling, many seniors evoke this feeling in me. Specially the ones who ‘get with it’. Who take on the generations below them on their own turf, who have learned to adjust and conquer this techo-savvy world with its laptops, mp3 players, iPads and the internet.

I enjoy hearing about the uncle who wakes up every morning and listens to his bhajans on YouTube. Or the aunty who does her surya namaskara watching a video of her guru. And the innumerable seniors who post selfies of themselves and their families on Facebook. These incidents are no longer unusual or rare; they have become normal. How about the seniors who have formed their own groups on Facebook, and who organise meetings at parks every couple of weeks where they and other likeminded seniors eat a hearty, but clandestine afternoon tea of mirchi bhajis, bondas and gajjar ka halwa, all of which have been banned from their diet by their concerned children. It’s a mild, yet delightful rebellion of which I wholly approve. The great thing is that I know so many of them. Like a dear family friend who sends out interesting ‘forward’ emails on topics ranging from politics to jokes to pious lifestyle advice. If I don’t receive his emails at around the same time that I am starting my working day at 9am, I get a tad worried. It may be 4:30am in India, but he’s always up at this time. Like the amazing grandmother and carer of her two grandchildren who likes nothing better than to go surfing on fine afternoons. She picks up the kids from school and heads to the beach. Or the couple who converted their daughter’s backyard into a veritable Garden of Eden, and who had amazingly, never touched a pair of gardening gloves or dug in the dirt in their lives before coming to Australia! And the grandma who taught a bunch of young mums on her street how to make dosas. One savvy grandpa even proudly boasted that his scores at Road Rage are better than his grandson. Howzzat?!

Our seniors today are a canny lot. They have a joie de vivre that can only be admired. They learn to live their lives to the fullest in this, perhaps realising that the dusk of their lives still offers myriad opportunities to experience and learn. What’s amazing is their attitude – bring it on, they seem to say! Well into their 70s and beyond, they are not quite ready for afternoon naps and walking sticks. They have taken that first tentative step into an unknown world, and now they are ready to conquer it. They use the internet extensively, sometimes in search of remedies to alleviate the aches of age, like a cure for diabetes being a concoction of cut and soaked okra! They don’t hesitate any more in downing a light beer or indulging in a small therapeutic glass of sherry at a party. Even if they’ve never drunk the stuff in their lives. And if they are inspired to do the bhangra to Bollywood music after those drinks, I’ll be standing on the sidelines and egging them on. From my mother who, a few years ago, was instructing me on how to use search engines, to my mother-in-law whose caring compatibility with the children on our street is now legendary, to a grandad in his 80s who picks up his grandkids from school every day of the week, they are all unique. This Senior’s Week, let’s applaud this new breed of seniors who are being their age, and enjoying every minute of it!