A new novel by Manu Joseph spares no one - not even India’s PM - with its biting humour, writes HIMANI KOTHARI 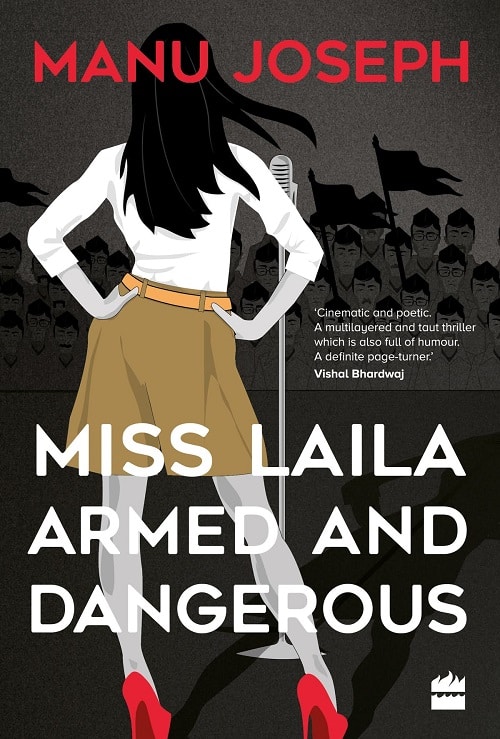 Reading Time: 4 minutesMiss Laila, Armed and Dangerous by Manu Joseph. Fourth Estate, 2017
A lanky woman, arms akimbo, wearing a tucked-in white shirt, divided skirt and red high heels is standing with her back to us. There’s a mike in front of her and she’s addressing a nondescript crowd, waving flags – the Bhagwa Dhwaj (the saffron flag of Shivaji, adopted by the RSS) to be specific. But what catches the eye is her dress – specially her khaki shorts.
The cover of Manu Joseph’s Miss Laila, Armed and Dangerous is telling.

“Just the sight of Hindu patriots this way in the uniform of the Sangh reminds Muslims of death,” writes the novelist-journalist in his new book.
The woman in the Sangh outfit is Akhila Iyer, one of the protagonists in the book. And if the way she dresses is any hint, Miss Iyer is that rare breed that has both a sense of humour and strong political views. She is all that and much more.
In Miss Laila…, Joseph is having fun. He is unapologetic and out to offend. And he spares no one. If you’re a Right-winger or a Left lib, Arundhati Roy fan or Modi bhakt, a feminist or an activist or a journalist, Anna Hazare follower or Irom Sharmila sympathiser – this book is NOT for you. Or maybe it is.
The novel opens as a political satire, with Miss Iyer – a neurosurgery student who has a love-hate relationship with Left liberals (in possible revenge at her mother who had abandoned her to carry out her ultra-Left activities) – playing pranks on everybody, and exposing their hypocrisy.

While anyone can write a political satire-cum-thriller, it is a writer like Joseph who can make you question and laugh at your beliefs

As far as the “patriots” go, Joseph also makes fun of them, though in a subtly indirect way, with characters like Damodarbhai – DaMo for short – and his minions, a certain Professor Vaid, and through “White Beard”.
There are two gripping narratives running parallel to each other. One involves Miss Iyer helping a man caught in the debris of a collapsed building survive by crawling to him through a tunnel and feeding him. Then he whispers to her something which has the intelligence agency racing against time to avert a terror attack.

The other concerns Miss Laila – of the title – whose character is loosely based on the 19-year-old Ishrat Jahan, an alleged terrorist killed in a “gunfight” with police while on the way to assassinate the then Gujarat Chief Minister Narendra Modi, whom most of us will only recognise from that picture of four dead bodies strewn on a road besides a blue Tata Indica.
There have been many theories on the Ishrat Jahan case, some holding that she was an innocent girl who got mixed up with wrong people. Joseph seems to subscribe to this view in his fictionalised tale that is too close to the real thing.
Miss Laila… is not an investigative piece in that it doesn’t provide any new information. But it brings a fresh perspective to the story of a “hip” Ishrat Jahan from Mumbra – a sister to six siblings, their idol and bread winner. Instead of letting the character of Laila speak for herself, the author lets her younger sister to be the narrator and that’s what humanises the story.

With his earlier works Serious Men and The Illicit Happiness of Other People, Joseph has already established himself as a prolific writer in English. With Miss Laila… he has set a new benchmark for anyone looking to spin newspaper headlines to write an everyday politics-inspired thriller.
While anyone can write a political satire-cum-thriller, which is at once funny and dark, it is a writer like Joseph who can make you question and laugh at your beliefs. (Unless you are a bigot, in which case the only literature you should be reading is that recommended by Dina Nath Batra).
Joseph addresses many issues in this stylishly-written 210-page book. Capturing the themes of identity, selfishness and inefficiency, he talks about the life of extras in the film industry, poor disaster management in the country’s financial capital and journalists who swing facts to show the poor in worse condition than they actually are in. He does all this while maintaining the flow of the narrative and never losing the plot.
There is so much happening, the moment you finish reading the book feels like you just got off a roller coaster. And you want to take the ride again. Luckily for us, the book is being made into a movie.