Amidst the horrors of Partition, a gentle tale of connection 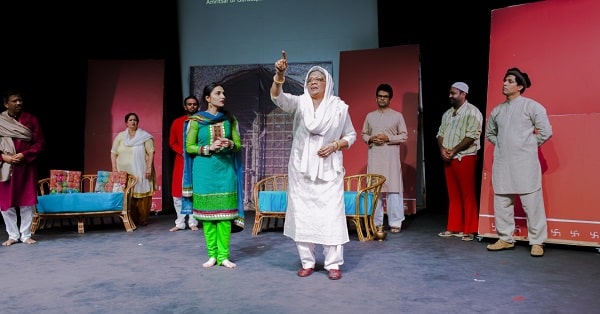 The India-Pakistan partition in 1947 ushered in a bloody separation where millions had to abandon their homes and become refugees as they sought desperately to move from one newly independent nation to another.

Sarhadein by Natyadarpan and Oorja is a warm and reassuring tale of humanity and compassion between a Muslim and Hindu family during the historically dark time when neighbours slaughtered neighbours and lifelong friends became sworn enemies.

At the centre of the 90-minute play was Dadi, the matriarch of a Hindu family left alone in a mansion that now comes under Pakistan. Her family cannot be found and she refuses to leave the house that she has lived in most of her life.

When a Muslim family is allocated that property they are equally surprised and dismayed to find her there, unrelenting and determined not to leave till her son comes to get her.

Despite the brutality and growing unrest that is unfolding around them the young Muslim family and the elderly Hindu mother form a bond that transcends human created borders. The Partition may have left lasting scars on both sides but there were many similar stories that restore faith in humanity.

Written by Asghar Wajahat and directed by Mandar Vaidya, the story is related more than 72 years after partition; however, it manages to deliver a very relevant message of empathy, courage and peace.

The plot is engrossing and provides little reprieve to the audience, but the tension is eased through sharp comedic timing from the villains, the local hoodlums who want Dadi out of the house or killed. Characterisation is well nuanced and the actors engage the audience with their talent.

The performance was given background scenery with simple props that created an era-specific ambience. Attention to detail was also provided through costumes and make-up making the scenes feel authentic.

Namrata Sharma played the role of Dadi and was also responsible for the adaptation of the playwright. The play was directed by Mandar Vaidya who essayed a brief role of the peace loving priest (maulvi). Both the seasoned actors were supported by a promising cast and crew.

Natyadarpan is a Melbourne-based theatre company that conducts acting workshops and presents plays on a regular basis. Through its activities Natyadarpan strives to project reflections of life experiences in a theatrical form, according to Mandar Vaidya OAM, the founder. A team of amateur actors, artists and theatre enthusiasts join Mandar in projects that promote ongoing development of performing arts.

Sarhadein was initially presented in August last year around the Independence Days of both India and Pakistan, and recently again on popular demand. Oorja Foundation, a community based not-for-profit, supported the event. Oorja focuses on issues of domestic violence, inter-generational conflict, child safety, elder abuse and social isolation affecting the elderly.

“This play is neither historical nor political; it is our small attempt to bring human perspective without any bias,” said Mandar. People in the audience agreed. According to Alpa Shah, who enjoyed the play immensely, actors and artists should not hesitate to speak against racial and religious bigotry. If people can learn to hate, they can also be taught to love.