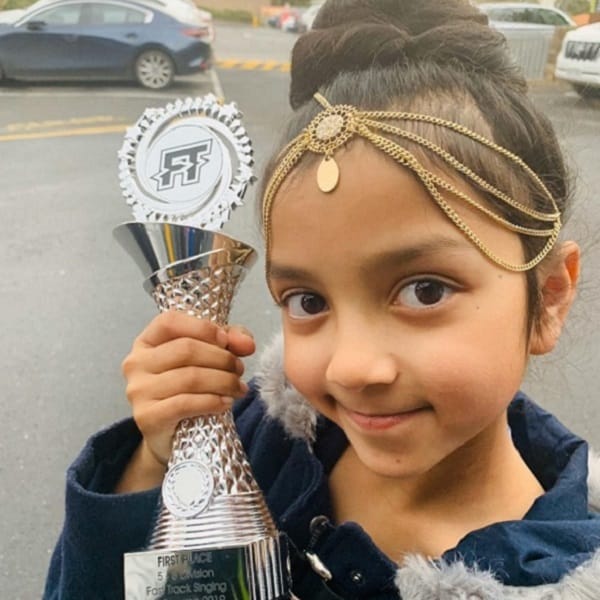 Ria K Bhagat may not be a household name yet, but her magical voice is sure to bring her much popularity. The eight-year-old won hearts – and the title – at the Fast Track 2019 Melbourne Singing Grand Final Trophy in the junior division.

With singing prowess and maturity far beyond her age, the young singer chose Naomi Scott’s famous song, Speechless from the movie Aladdin. The song and Ria’s rendering of it along with her on-stage confidence and cute Princess Jasmine attire secured her the first place, thus fulfilling her dream of winning a mainstream singing competition. Under the guidance of her vocal coach Caitlin Min Fa and encouraging parents, Ria is now gearing up to participate in singing auditions at the state level. However, the talented singer refuses to let her newfound fame go to her head, despite having to ward off autograph seekers in her school.

Her advice to aspiring singers is simple: be humble. “Don’t try to impress anyone with your voice. Be yourself and do what is within your range and enjoy it,” she says.

Ria’s budding musical journey is inspirational not only due to her singing talents – competent emulation, melodic voice, strong acoustic sense – but also for her battle against persistent health issues.

Ria was diagnosed with Insulin-dependent Diabetes when she was only five. But, the Melbourne resident doesn’t let her health concerns get in the way of her aspirations.

Taking regular monitoring of blood sugar levels, insulin pumps and health issues in her stride, Ria continues to dominate the centre stage with her talent.

Ria’s tryst with singing started in 2017 when she had gone to Amritsar, India, to meet her extended family. There, while signing with her cousins, she was discovered by renowned Punjabi singer, Manpreet Sandhu. He encouraged Ria’s parents, Lieutenant Jatinder Bhagat and mother Gurbinder, to enrol her in professional singing lessons.

An ambitious child, Ria balances her time between studies, playtime, music lessons and health issues. Though she is unclear of her future career prospects at the moment, Ria wishes to add acting and gymnastics to her extensive list of creative pursuits. Her favourite singers include Ariana Grande, Neha Kakkar and Guru Randhawa.

“Our entire life revolves around Ria’s singing at the moment,” says her mother, Gurbinder. “Driving her to lessons, rehearsals and performances can get quite demanding, but we are extremely proud of her achievements and will always support her in whatever she does.”

“I feel music and singing improves mindfulness and has increased Ria’s level of happiness, focus and overall wellbeing,” she adds.

Read also: Singing to his own tune