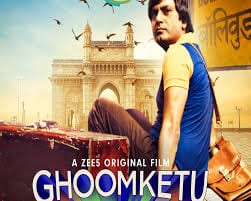 Ghoomketu becomes one of the first Hindi films to go straight to OTT. Which should have made it an ‘event release’ of sorts, except one is aware that this is technically not a new film. It was wrapped up a few years ago, and waiting for a platform to release (you do spot Razzak Khan in a few frames).

The fact does not actually do the right kind of advertising for the direct-to-OTT campaign — indeed, if films with little or no traction fill up the digital libraries, the entire fad of getting relevant releases directly to OTT could perhaps come and go as unimpressively as the trend of video films did in the late eighties.

We are, of course, not to overtly mull over business basics in a review. Which brings us to Nawazuddin Siddiqui, the primary reason you would want to check out this film.

Few actors can turn a mediocre film into watchable fare as Nawazuddin does, and Ghoomketu only reiterates that fact. At a glance, he would seem in his comfort zone here, playing the small-town guy. Yet as the new-look Nawaz adds an entirely different dimension to the small-town hero prototype, he underlines once again the fact that his range as an actor is simply inexhaustible.

The quirk about his character is evident. He is a writer named Ghoomketu, wears a well-oiled and neatly parted long hairdo that renders a funny impact than one of a writer’s intellect to the face. With a book titled “How To Be A Bollywood Writer In 30 Days” in his bag, Ghoomketu runs away from sleepy Mahona in UP to Mumbai, with dreams of hitting the bigtime.

For instant impact, writer-director Pushpendra Nath Misra could hardly have created a funnier specimen. Yet, the scriptwriting brainwave simply seems to begin and end with the character that Misra has created for his hero. As Ghoomketu arrives in Mumbai and gives himself 30 days to succeed, the plot struggles to hold your attention. Thrown into the tale is a crooked cop (Anurag Kashyap) who is, incidentally, also given a month to track down the writer on the run.

The film tries to work as a comedy riding smalltown cliches. That, the makers must have realised, is clearly not enough anymore. Too many recent modest-budget hits have already tried the trick, with funnier scripts.

So, Misra tries narrating his story with a dash of spoof. The joke’s on Bollywood, basically, and its big bad filmmaking culture. The problem with the jibes is they are funny only in fits. Besides, the film does not lay bare anything about Bollywood that you are not already aware of.

If Nawaz comes up with a stellar act, most others in the cast deserve accolades, too. Ila Arun as Santo bua matches Nawazuddin’s comic timing. Anurag Kashyap impresses with understated humour essaying Inspector Badlani. Swanand Kirkire has its moments as Guddan chacha. Raghubir Yadav as Ghoomketu’s ‘Dadda’ would have been more effective if he did not give in to the tendency to ham.

The pace is too lazy for a new-age comedy. Realising as much perhaps (and because this is a film about Bollywood), the makers have lined up half a dozen B-Town celebrity cameos.

Ranveer Singh and Sonakshi Sinha (who would perhaps have shot “Lootera” for Phantom Films around the time this film was launched) play out a skittish romance. Chitrangada Singh portrays the stereotypical Bollywood heroine shooting a song (the sort you don’t seriously see in our films anymore). Lauren Gottlieb does an item number. Director Nikhil Advani as himself explains a shot to Amitabh Bachchan, who then brings up the climax of “Ghoomketu” as himself.

Exciting as it may sound, none of these star attractions manage to breathe life into this half-hearted, half-baked shot at comedy.

The problem with “Ghoomketu” lies in its writing. The story needed a little more life and a lot more irreverent laughs. For a film hawked as a comedy and a spoof, the effort to create humour becomes too evident. That is the film’s big drawback.

Watch it? Uh, well… only for Nawazuddin Siddiqui.