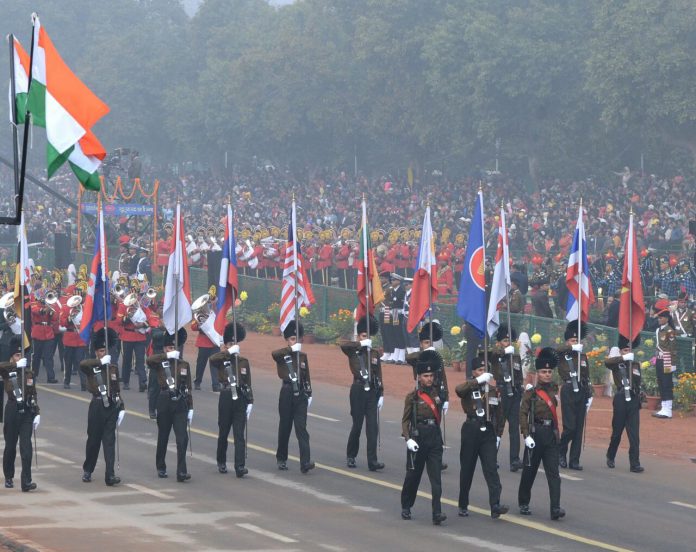 Sixteen States and Union Territories and Six Central Ministries will participate in the Republic Day Parade this year at Rajpath in New Delhi.

For the first time after appointment of the Chief of Defence Staff, 3 helicopters – representing the three wings of the defence forces – the army, the navy and the air – flew together, reflecting the new sense of cohesion within the three forces.

In all, 16 military contingents will take part in the parade, and 4 weapons will be showcased at the event. In another first, on January 26, the Prime Minister accompanied by the CDS and the three Chiefs of Staff will visit the National War Memorial.

Brazilian President Jair Bolsonaro will arrive in India on a four-day visit beginning Friday with an aim to “re-energise” the bilateral strategic partnership will be the chief guest at India’s 71st Republic Day Parade on January 26.

The tableau of Ministry of Jal Shakti will showcase the government’s new initiative, ‘Jal Jeevan Mission’, during the Republic Day parade, which aims at providing functional tap connection to every rural household by 2024. The tableau front is in the shape of a huge tap and pot which are made of thousands of steel taps and metallic pots, representing millions of rural households.

CRPF women bikers to showcase skill at Rajpath on R-Day

In a first, a team of over 50 women bikers, named “Dare Devils”, from the Central Reserve Police Force (CRPF) would be showcasing their skills on the Rajpath on the occasion of 71st Republic Day celebrations.

NDRF to showcase flood rescue team in action on R-Day

The National Disaster Response Force (NDRF) will showcase their flood rescue team in action, rescuing drowned people, including children and animals, during the Republic Day parade on Sunday.

A contingent of the Para Special Forces, the special operations unit of the Indian Army, will be marching down Rajpath this Republic Day. The contingent commander is Major Nikhil.

The Jammu and Kashmir’s ‘Back to Village’ programme for the displaced Kashmiri Pandits, launched last year, is the theme for its Republic Day tableau this year.

Meghalaya, the abode of clouds, will showcase the double-decker living root bridge, a unique natural phenomenon shaped by human ingenuity, in its tableau for the Republic Day parade.

The Assam government has decided to showcase the northeastern state’s bamboo and cane crafts in its tableau during the Republic Day parade, a senior state government officer said.

Madhya Pradesh tableau to be based on Tribal Museum

The Madhya Pradesh government has decided to showcase a tableau depicting Tribal Museum of the state in Republic Day parade.

The tableau of Himachal Pradesh will showcase fervour and festivity of world famous Kullu Dussehra celebrated in Kullu valley during the Republic Day parade.

The Odisha government has decided to showcase Rukuna Rath Yatra of Lord Lingaraja, worshipped as both Lord Shiva and Lord Vishnu (Harihara) at the Lingaraj temple in Bhubaneswar, at the Republic Day parade.

Goa will depict its seashore along with its biodiversity and livelihoods on its tableau during the Republic Day parade, apart from highlighting the state’s campaign to ‘Save the Frog’.

Telangana finally gets to show its rich culture

Five years after its birth, Telangana — the youngest state of the country — will have its tableau in the Republic Day parade. The tableau will represent rich mix of culture and festivals.

The Chhattisgarh tableau will showcase the artistic beauty of the state’s folk life during the Republic Day parade on January 26, the state government said.

The Tamil Nadu government will showcase Iyyanar deity statue in its tableau during Republic Day parade as it is installed at the entrance of villages in the state with a belief that he would protect the villagers from “evil forces”. Iyyanar deity is also known as the guardian deity of villages.

After a long gap of four years, the state of Rajasthan would be getting an opportunity during the Republic Day celebrations on Sunday to showcase its tableau, an official said.

‘Kirat Karo’, ‘Naam Japo’ and ‘Vand Chhako’ is the theme of Punjab’s tableau at the Republic Day parade in New Delhi on January 26, an official said.

The Karnataka government will show case ‘Anubhava Mantapa’ (Centre for Experiences), a socio-religious centre of the 12th century Kalyana Karnataka, in its tableau in the Republic Day parade.

The Ministry of Commerce and Industry will take part in this year’s Republic Day Parade where it is going to showcase a tableau depicting various stages of its flagship project, ‘Startup India’.

The Republic Day tableau of the UP government will exhibit the cultural and religious tourism and the ‘Sarva Dharma Sama Bhav” theme.

The tableau of Department of Financial Services, under the Ministry of Finance, in this year’s Republic Day parade will depict the achievements made in the area of financial inclusion which have been recognized world-wide.

The Rani ki Vav, an UNESCO world heritage site, highlights the rich and beautiful tradition of the Gujarati culture and is a distinct example of complex architectural technique.

‘Kashmir to Kanyakumari’ to fascinate viewers on Republic Day

This year, the Centre Public Works Department (CPWD) tableau will be based on its horticulture department depicting Kashmir to Kanyakumari theme, an official said.