Sydney surgeon on a mission

Dr Ray Hodgson has his own mountain to climb in Nepal, and it’s not Everest, writes TARINI PURI 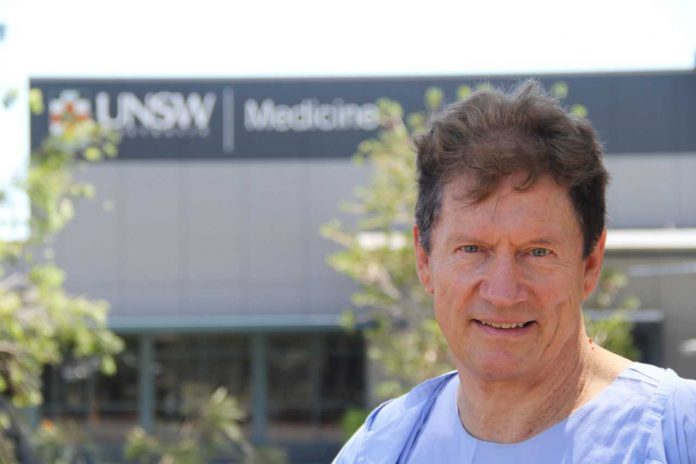 Reading Time: 4 minutesAll it took to give dignified life back to a young woman, was a three-hour surgery.
“She faced lifelong ostracism from family and society because of her physical conditions,” recounts Dr Ray Hodgson, a specialist gynaecology surgeon, describing his career’s most emotionally-stirring medical case.
That was in Nepal, some two years ago. Hodgson has been working on improving the maternal health of women there since almost a decade. He is now drawing attention to the deplorable health conditions there, especially in the remote areas, in the form of a book, aptly called Heartbreak in the Himalayas.

Fuelled by his life-long passion for global improvement of women’s health, Hodgson has been focusing his attention on the cause of maternity health of women in rural Nepal, which is probably among the poorest regions in the world.
Since 2010, he has been travelling to Nepal every few months with teams of volunteers to tackle the extremely high levels of maternal and perinatal mortality in the tiny Himalayan country.
He has also founded Australians for Women’s Health (A4WH) with the same objective. The organisation is now raising funds (target $500,000) to build a state-of-the-art 35-bed mother and baby hospital there.
According to international statistics, a mother dies every four hours and a baby dies every 20 minutes in the country, often due to preventable causes and lack of adequate health facilities. Many of the women who survive often end up forced to live life-long with problems like urinary incontinence, dragging pain, infection and great difficulty when undertaking even simple tasks like sitting or walking.
Prior to his continuing commitment to Nepal, Hodgson also spent a few years in southern India volunteering his medical services through Equal Health in the early 2000s.

His book details the challenges that he and the volunteers have faced over the years, including working out of dilapidated buildings with very limited supplies, working in tents under flashlights with team members giving their own blood in order to save their dying patients, as well as managing the cultural challenges in what is a highly patriarchal country.
Describing the book, Hodgson says, “You can’t help being moved by the heartbreaking stories of these women. We wouldn’t stand for this in our country and we shouldn’t stand for this in any country. But most people are blind to the appalling conditions these women and babies suffer. I want this book to open people’s eyes, and to realise how very lucky we are in Australia. And I want people to realise that every single one of us can help these desperate people.”
Currently based in the mid north coast of NSW, Dr Ray Hodgson graduated from Sydney University in 1981 and took his surgical training in Sydney and London. Among the other feathers in his cap, he is currently also an Associate Professor at University of NSW where he is actively involved in education of medical students, registrars and consultant surgeons.
His book was officially launched in Sydney, Melbourne and Port Macquarie last month and profits from its sale are going towards the hospital’s construction in east Nepal on the site of Gaurishankar Hospital. It will have modern labour wards, an operation theatre, OPD as well as teaching facilities for local doctors, nurses and mid-wives.
The encouragement for the book from his fraternity has boosted the morale of the doctor, and he is sure it will be appreciated by the general readers as well. “We are currently on the second print run of the book. The readers say it is hard-to-put down, but they are forced to, as it frequently brings tears in their eyes. The book will be available on Amazon International so everybody can buy a copy,” he says.
Dr Hodgson fondly describes Indians and Nepalese, who he says share close ties. “They are truly gentle, serene and caring communities with big brown eyes full of magic and wonder,” he says.
He is trying to involve more Indians to help the Nepali women and improve the facilities for maternal health. “The Indians do have an affection for the people across their border,” he says.
The case of Jumari: The true story that inspired Dr Hodgson to move mountains in Nepal
22-year old Jumari lives in rural Nepal. She suffered severe genital prolapse after her only pregnancy three years ago, but sadly lost the child during a traumatic three-day labour at home. The genital prolapse began shortly after that. It had progressed to a painful lump between her legs, and as a result, she also suffered from continuous urinary incontinence. Her clothes smelt of stale urine, she could perform very limited physical work on their farm, and her husband had thrown her out of home as intercourse was impossible. Due to the shame of being cast out by her husband, and her continued urine loss, Jumari was shunned from most people in her society, including her parents. She somehow reached Dr Hodgson’s team and they performed corrective surgery to end her physical pain.
Uterine prolapse is a debilitating condition that plagues 10% of Nepal’s 13 million women. Symptoms include urinary incontinence, dragging pain, infection and great difficulty when undertaking simple tasks like sitting or walking.
The root cause is poor diet and heavy workloads for women. This stems from deep-seated culture of gender discrimination from early childhood, early marriages and pregnancies and limited access to health services.