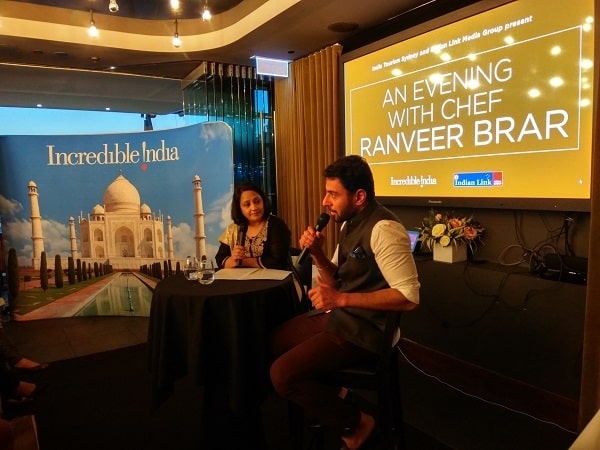 Reading Time: 6 minutesDid you know that paneer – a much-loved staple in Indian cuisine – is a rather modern introduction?
It’s true. The ancient Hindus, for whom milk was a sacred substance, would not deliberately curdle milk to produce cheese.
This was one of many little-known facts about Indian food that Ranveer Brar shared with guests at a recent Sydney event.


One of India’s best-known food personalities, Ranveer is in Sydney currently producing a series on the contemporary food scene in this country.
He was speaking to guests at an event hosted jointly by Indian Link and India Tourism Sydney.
The renowned chef also demonstrated an innovative dish with tuna in Indian pickling spices and activated charcoal jelly (yes, there is such a thing).
And who knew you could replace tuna with watermelon, for a vegetarian version? Genius!
Ranveer is currently the executive chef of Novotel Mumbai, but is better known as a TV chef, food writer and blogger. A former judge on MasterChef India, he has a massive social media following, with 1.5 million Twitter followers, some 500,000 Facebook followers and 83,000 Instagram fans. Which makes him a celebrity in the ranks of film stars and cricketing heroes.
Yet, he will only describe himself as a “cook who got lucky.”

It is this trademark humility and boy-next-door demeanour that is perhaps more endearing about the man.
Add to this, a genuine love for food and everything related to it.
“Is life possible without food?” he asked simply, when we put to him that perhaps today’s world seems to be obsessed with food and gourmet culture. “What would happen if we did not eat for three days in a row? Three weeks in a row? Three months? Let’s not underestimate food, it’s the most basic connection to life. And if it is the most basic connection to life, how can there ever be an excess of it? So why not excessively celebrate it?”

Ok, Ranveer, chill: we’ll continue to fawn over food shows on TV, try out the new cafes, photograph all our food, and buy up loads of kitchen gadgets we will never use.
“Gadgets, now I actually endorse a lot of them,” Ranveer came back cheekily. “They are basically a means of convenience. For example the mixie: if I had my way I would grind my own spices by hand. Who has the time? Think of your gadgets as time-saving devices.”
What are the essential gadgets that an average family kitchen should have? “You’d need a mixer of sorts, stick blender or bullet blender, and if you’re health conscious, then an air fryer… not because I endorse them!”
India: Food experiences
What Ranveer also endorses, of course, are food tours in India. What food-related experiences would he recommend?
“I curate a lot of these ‘food experiences’ for groups from Israel, Belgium and other places, so I can tell you a bit about that. Let’s go region by region. In the north, you’ve got to go to Old Delhi. Travel the bylanes and see the food wonders the area has to offer. In Punjab, once you’ve done the Golden Temple at Amritsar, you have to eat around it. Rajasthan, a visit to a chilli farm is a must: at Mathania, for instance, to sit out in a chilli farm, and to eat lal maas with its fiery red colour that comes from the chilli of the region, is an unbelievable experience.
“In Mumbai, you’ve got to watch the Dabbawallahs in action. Check out this community of 80,000 lunchbox delivery men, and see how the whole system works. They do more than 250,000 lunch deliveries a day, with less than one in a million failures. They have nailed it down to a science. Absolutely amazing.

“Down south, the banana leaf meal is a unique experience. The banana leaf has antibacterial properties, which are released when hot food is put on it; as you eat with your fingers, these antibacterial properties are scraped off the leaf and into your mouth. Also, the food goes onto the platter in a particular order – it is not a random process – based on Ayurvedic ideas of palatability and digestion; the sour and the salty are served first, to get the digestive juices flowing. Also, you don’t typically end on a sweet; you eat dessert, and then you have papad and chutney. Sometimes there are 18 courses served. I’ve researched the ‘thali’ composite meals of India, of which there are more than 170 authentic versions!
“In the west, Kolkata is one of the most amazing cities I’ve been to. China Town there is where ‘Indian-Chinese’ food originated, when the Hakka tradesmen came to India in the 1850s, pushed out of China. Pujo food is a must in Kolkata if you go there during the Durga Puja festivities.
“Overall, I think temple food in India by itself is a whole space that has not really been spoken about. In the 1150-year-old Jagganath Puri temple in Odisha, the recipes for prasad (sanctified food) date back 1000+ years.”
Foodie trends in contemporary India
Interestingly, it is these old times, that are currently fashionable again in the food scene in India, Ranveer observed.
“Today we have an increasing awareness about eating locally. We’ve looked outwards for a really long time and we are very secure as a nation and in our identity. India has had four broad generations. The first generation was when we gained Independence from the British. That first generation had no clue what was going on – they were just dealing with what happened. The second generation worked hard to consolidate. The third generation began to look outwards – travelling, and seeking inspiration from what the world had to offer. The fourth generation is the generation of today, a very secure generation. Being Indian, being desi, is finally cool. This generation is confident in themselves and secure with what is happening in the world. They understand that a lot of food in the west is starting to be driven by India, like coconut oil and turmeric lattes. Now they are beginning to look inwards. They want to discover hyper-regional, hyper-local, culturally relevant cuisine. We have realised political boundaries cannot define eating. So instead of ‘Gujurati food’, we have Kathiawadi food and Surati cuisine. Hence, food is automatically becoming more detail-oriented. Across the world as well, responsibility and detail are becoming core drivers of cuisine.”

He added, “In Australia what I like most is the way you have adopted ‘Farm to Fork’. You are recognising the importance of knowing the farmer and trusting the farmer. Another trend, which is quite similar to ours, is the serious movement towards rediscovering native Australian food. I’ve just come off a cook with Indigenous chef Mark Olive and it is simply heart-warming to see the way in which native ingredients are being embraced by mainstream restaurants here.”
Blending the old with the new
Later, Ranveer got together with Varun Gujral, chef of Manjit’s at the Wharf and one of the most exciting young chefs in the city. Together, they dished up a drool-worthy (and immensely Instagrammable!) tuna tartare with achari spices and charcoal jelly cubes, and even made a veggo version with watermelon.

Varun said later, “It was a privilege for me to cook with Ranveer and learn from him, while also showing him my own take on modern Indian food.”
Ranveer had his audience spellbound as he spoke about India, its food and its history. His skills as a story teller came to the fore as he described the food of an illiterate woman in rural Rajasthan who feeds travellers in her remote part of the world, using a centuries-old earthen cooling system in the lack of basic amenities. Banished from her village after losing her husband, she eked out a living doing what she knew best – and today has put her children through university.

It is clear that food, for Ranveer is more than just cooking and eating – it is about learning other people’s stories, and telling them to the world.

After all the banter of thali meals, 1000-year-old temple recipes, bush tucker and tuna tartare, what would you say Ranveer’s choice of comfort food is?
“A good quality khichdi with desi ghee.”
Now that would qualify as a #Ranveerism.