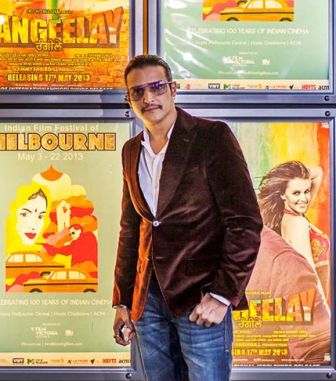 Kudrat Singh: What drew you into making Rangeelay?
Jimmy Shergill: My last film in Punjabi was a political thriller called Dharti. It was on a slightly serious note, so when we were almost finished with filming, we decided that the next one would be completely colourful and total entertainment. That’s where the title was born, koi rangeeley si film banatey hein. Suddenly we just came up with the title of the film Rangeelay. We had the title before we started working on the story!

KS: How did Neha Dhupia get involved?
JS: We had been in talks with Neha for some time. She is also Punjabi, from a Sardar family. She had said when we were filming Delhi Heights together, that because she is Punjabi herself, she would ‘love to do a film for myself and just as a gift to Punjabis’. When I realised she was serious, my director and writer in Mumbai contacted her and narrated the story and subject of the film to her. And sure enough Neha loved it, because it was a challenging role for her.

KS: How did Neha fit in the team and film?
JS: Super! I think experience plays a big role as an actor. When you have done all sorts of films and worked with different producers, the maturity shows. She’s brilliant.  We needed someone who has that freshness for Punjabi films and being a sardarni, people can relate to Neha. She is suited for both salwar khameez and western clothes, and has the look for both. It was a tricky role, as she’s portraying two to three characters, so she had to be precise and she’s done a brilliant job. It was a tough role for the girl. Regarding her language, Neha did say that she only spoke simple Punjabi to her parents. But
our Punjabi is very simple too, so that everyone can enjoy the film. The she was absolutely comfortable and she did her own dubbing, she was very confident.

KS: Do you prefer making Punjabi films over Hindi films?
JS: I love making them! Barring a couple of serious films like Manat that was based on a true story, Dharti was a serious subject. Apart from those, all our films have been very fun and entertaining. Normally I get very tense and mature roles in Hindi films. But when I make films like Rangeelay, I really enjoy filmmaking. In one film you see romancing, singing, dancing, action, comedy and light hearted stuff. You get the whole package in one project. I enjoy shooting for my Punjabi films as my team and I have been working together for such a long time. I love doing my Punjabi films!

KS: What can the audience expect in Rangeelay?
JS: Rangeelay is a very fun film, it’s just the treatment which is a little warped. It is a slice of life, with drama and emotion thrown in to make it more cinematic. It is a very simple story, but it does have twists and turns. It is a full-on family film, with action and romance for the youth in this day and age of coffee culture. And we’ve set the whole thing in a gol-guppa stand.

KS: So what’s next on the cards?
JS: We are currently shooting a film called Bullet Raja, directed by Timanshu Dhulia with Saif Ali Khan and Sonakshi. It is based on some true events, and releases on September 6. I am currently busy with that project.

KS: When you started working in films, did you realise that it would be a career?
JS: I never thought I would act, it just happened! I was in Mumbai and started acting classes and loved it, so I decided that this is what I want to do. It’s been okay, slow but steady. I’ve had fun portraying some nice characters, and working with amazing people who are now very close friends. But there’s a long way to go yet.

KS: How did your parents react when you told them you wanted to become an actor?
JS: My parents have always been very supportive and told me to wait and do the movies I wanted to do, instead of getting desperate and taking on anything that came my way. I would have ruined it all for myself, but they said just hang on. I think that was what was important, their support.