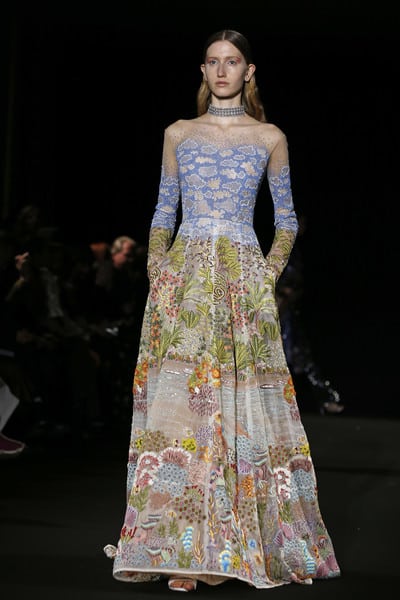 With yet another feather in his cap, Rahul Mishra becomes the first Indian designer to be welcomed as ‘Guest Member’ on the Haute Couture Calendar. The designer presented his Couture Spring collection, Home, at the Maison de la Chimie, on January 23.

The postgraduate from NID, Ahmedabad stated, “A foray into couture is a conscious decision led by an intention of catering to a demand for our fashion in replacement of having to create the demand. Articulated with the love for all people involved and value for the environment at large, great strength is found in the process.”

The collection is inspired by the designer’s recent trip Soneva Fushi – Maldives, where he was mesmerised by the many shades of blue, and the abstract shapes formed by a diaspora of fish, under-water foliage and the striking corals.

The winner of the International Woolmark Prize 2014, recreated entire ecosystems through delicately hand embroidered flora and fauna and explored three dimensional embroidery. Some of the pieces took more than five thousand human hours to make, revealed the designer whose focus on sustainability and superior craftsmanship has resulted in reducing the production quantity while growing the business.

The designer started showcasing his ready to wear collection at Paris Fashion Week in 2015. In 2019, he became the first Indian to be awarded Talent De La Rarete (Rare Talent of the Year) in Paris.