Pulwama attack: What we can do

Should the diaspora put pressure on the governments of their adopted countries to move strongly against cross border terrorism? 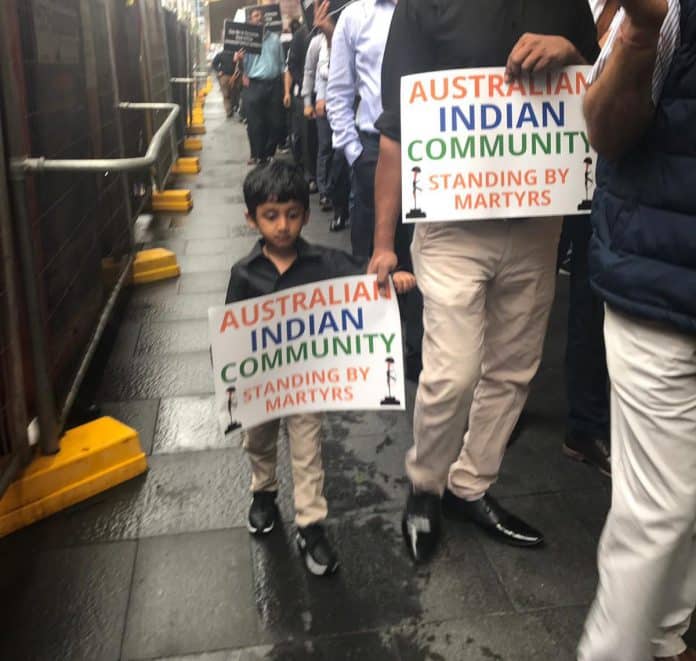 Reading Time: 2 minutesThere’s been an outpouring of nationalism in Australia’s Indian community.
As India reels from a heinous terrorist attack that took 49 lives, community-based social media and radio platforms have been abuzz with tributes to the fallen, condemnation of the mentality that perpetrates such acts, and some pretty intense discussion about the larger Kashmir conundrum.

A grateful nation bows to the martyrs of Pulwama.

A befitting reply will be given to the perpetrators of the heinous attack and their patrons.

No force will succeed in disturbing peace, progress and stability of India. pic.twitter.com/hFq0pUByVJ

On 14 Feb, a car driven by 22-year-old suicide bomber Adil Ahmad Dar, a Kashmiri local, was responsible for the devastation of a convoy of trucks with CRPF personnel enroute from Jammu to Srinagar. Shortly after the attack, the Pakistan-based terrorist organisation Jaish-e-Mohammed, through its leader Masood Azhar, claimed responsibility for this act of terrorism.
Indians in Australia joined their compatriots in mourning. Community groups organised peaceful gatherings in all capital cities, including Sydney, Melbourne, Brisbane, Perth and Adelaide. Now over 700,000 strong in Australia, the community becomes mobilised within hours, thanks to social media.


These gatherings, while largely peaceful, also pointed fingers at Pakistan for harbouring terrorist organisations: calls were made at each meeting to highlight these alliances of the Pakistan government and its intelligence agencies.
Meanwhile, messages of condolence were issued from the Australian government at the highest levels – both Federal and State – to the Indian Prime Minister. The question is, is this enough, or should the Indian Australian community ask more of the Australian government? Can the 30 million strong global Indian diaspora put pressure on the governments of their adopted countries to move strongly against cross border terrorism?

You don’t need to see the made-in-Australia movie Hotel Mumbai to learn how cross border terrorism is sanctioned in Pakistan. The horrific 2008 attacks on Mumbai (now referred to as 26/11) killed 174 innocent people: they were coordinated in real time via satellite phones from handlers of the terrorist group Lashkar-e-Taiba in Pakistan. Till date, while the rest of the world is in agreement to the identity and current location in Pakistan, of those coordinating these attacks, little has been done to bring them to justice. Not only this, but there is evidence of Pakistan’s connivance in other terrorist attacks in India (2001 Indian Parliament, Pathankot Air Force base in 2016, Uri Army base in 2016).
Perhaps Indian-Australians, either in a single petition or individually, could write to their local and federal members urging them to put the issue on the table condemning Pakistan for supporting cross border terrorism. Diplomatic pressure needs to be exerted to stop such attacks on India.
We have witnessed over the years seen an increasing presence of politicians of all persuasions at community gatherings, introducing themselves and soliciting our votes. Now is the time to ask for something in return. While community peace gatherings are a wonderful way to show our support for our country of birth, now is also the time to ask our leaders for more. The elections in NSW are around the corner, and Federal elections are not too far off. Now is the time to get our voice heard; it is also an opportunity for the Australians Government to stand for what is just and right, and speak out against cross border terrorism in other parts of the world.
- Advertisement -
Share
WhatsApp
Facebook
Twitter
Linkedin
Previous articleThe southern coastline of Sri Lanka
Next articleA young Kashmiri boy meets a CRPF soldier….