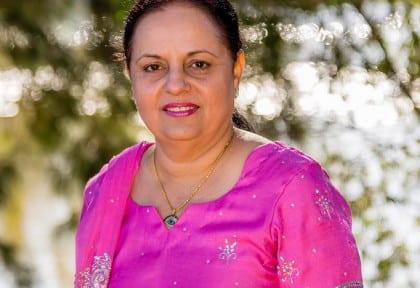 The Pink Sari Project continues its bit to educate the community about breast cancer. This October, in Breast Cancer Awareness month, we speak with survivor Jagjit Kaur about her role with Portraits in Pink

The colour pink has forever been associated with femininity. Say ‘pink’ and girly stuff starts floating in the mind’s eye. It is most befitting then, that the Cancer Council chose the pink ribbon to represent their campaign for breast cancer.
Every year Australia marks October as Breast Cancer Awareness month. As the country goes into overdrive, hosting events to raise funds and awareness, the Pink Sari Project does its bit to educate the Indian and Sri Lankan community in NSW about breast cancer.

According to the statistics, 1 in 8 women in NSW will develop breast cancer in their lifetime. Around 50 women are diagnosed with breast or gynaecological cancers in Australia every day, and 9 out of 10 of these women have no family history of the disease. The disturbing fact that the rate of breast screening amongst Indian and Sri Lankan women is one of the lowest in NSW gave birth to the Pink Sari Project in 2014. This need-based initiative actively educates the two communities about breast screening and the importance of early detection.
The project is led by the NSW Multicultural Health Communication Services and the NSW Refugee Health Service with funding from the Cancer Institute NSW. It is supported by UTS and various Breast Screen NSW services and works closely with various Indian and Sri Lankan community organisations in NSW.
The program’s recent Portraits in Pink exhibition at Campbelltown Library featured photographs and stories of breast cancer survivors from Indian and Sri Lankan backgrounds. The exhibition is an ongoing effort by the Pink Sari Project, held frequently at various locations. It aims to removw the inhibition associated with breast cancer and mammograms, and to change the attitudes of women, their families and the community towards the disease.
One of the participants of the Portraits in Pink exhibition is Jagjit Kaur. Indian Link caught up with her to hear her story first hand.


Kaur is a registered nurse born and brought up in Malaysia. At the age of 27 she got married and had two daughters before migrating to Australia in 1990. After the birth of her son in 1992, she started feeling lumps in her breasts. She had them checked but the results were normal. It is worth mentioning here that no mammogram was performed at this stage. By 2002 the lumps had hardened. Kaur was concerned and went for a mammogram. This time the results rang alarm bells and she was sent for an ultrasound. The surgeon informed her that her right breast was riddled with cancer cells, while in the left breast they were contained in one area. Initially, a mastectomy was performed on her right breast and a lumpectomy on her left breast, but later the left side had to undergo mastectomy as well.
After the procedure, Kaur recalls, “It took me some time to recover. It was hard but because of the screening the cancer had been detected in the very early stages so I didn’t have to undergo chemotherapy.”
She remembers, “When the doctor told me I had cancer I was terrified. I thought it was the end of my life. I was saddened that I wouldn’t be around to see my children grow. The wait for the results was excruciating. It kept playing with my mind.”
During this difficult time, Kaur acknowledges it was the support of her family that kept her going. “My two daughters were in their teens and my son was only eight, it was a very worrying time for them and the whole family was scared.”

Kaur was 45 when she was diagnosed with breast cancer and after successful treatment she has remained cancer free for the past 16 years. She still goes for regular blood tests and has had a hysterectomy to eliminate the possibility of ovarian cancer, but overall she lives a normal, healthy life.
Reflecting on how breast cancer changed her, she shared, “Because it gives you such a fright, when you recover you feel like you’ve been given a second chance. You appreciate people more. Your outlook on life changes and you stop taking things for granted.”
Kaur has this advice for women from Indian and Sri Lankan backgrounds:
“Don’t put your life at risk, examine yourself regularly and if you find something suspicious, go see a doctor. Don’t be embarrassed, if you are not comfortable with a male doctor, go see a female doctor. But please have it checked, as early detection could improve your chances of survival immensely.”
Screening for women over 50 is free. It takes only 20 minutes every two years and Mammograms can detect cancers as small as a grain of rice before any noticeable changes are spotted even by the doctors.
Kaur encourages her daughters to remain vigilant as she observes cases of breast cancer in younger women increasing.
Her journey with Pink Sari began when the project came to the Sikh temple she attended in Campbelltown. On learning of her survival one of the ladies invited her to get involved with the project.
“I thought if my story could inspire someone to get screened, then why not,” she said. Kaur has been participating in the Portraits in Pink exhibition since last year and has made a personal appearance to answer questions on one occasion. She has also been interviewed on radio about her experience.
Jagjit Kaur believes Pink Sari is playing a vital role in bringing awareness to the Indian and Sri Lankan community.
And the efforts are paying off, as David Currow, Chief Cancer Officer of NSW affirmed, “Breast Cancer screening rates amongst Sri Lankan and Indian women is on the rise, thanks to this community initiative.”
- Advertisement -
Share
WhatsApp
Facebook
Twitter
Linkedin
Previous articleThe one good thing about Donald Trump
Next articleKiddy Diwali