What Sonu Sood did in Melbourne

PREETI JABBAL catches up with an old friend from uni 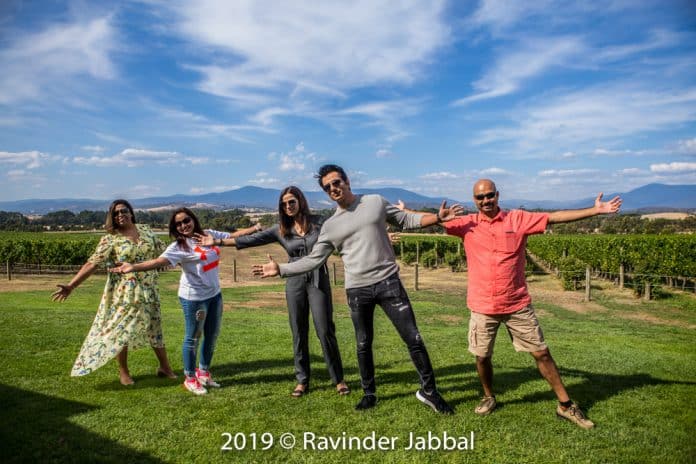 Reading Time: 5 minutesIt was quite a special Valentine’s Day this time round, catching up with my college time friend Sonu Sood who was in town.
Nearly a quarter of a century later the Bollywood star seemed fit as a fiddle and looked younger than ever. His elegant wife Sonali accompanied him and we did what we do for all our overseas visitors: shopping, and then a tour of our local wineries and fresh Yarra Valley produce.

Sonu is a teetotaller but was happy to come along to spend time with us.  On the way we spoke non-stop, covering his life, my life, how we’d changed, what we wanted for ourselves and our children, and of course, his acting career.
I first met Sonu in my hometown in Nagpur, India. We had advertised for an audition for models for a fashion show that I was putting together as choreographer. Sonu, who hails from Moga in Punjab, was studying Engineering in Nagpur at that time and he accompanied a friend who was auditioning.

Tall and very handsome, I spotted him straight away and was rather disappointed that he did not audition. After the event I asked him if he would like to be part of my show. He agreed, albeit reluctantly, as he had not done any modelling before. I said to him, “Trust me, you will rock.” He did, taking to the stage like duck to water.
The lead up to the show is always more fun than the event itself, and we have some wonderful memories of early morning rehearsals, selecting the music, coordinating our routines and choosing the outfits.

During student days we have very little financially, but the experiences are so rich we treasure them forever.  I remember Sonu and his friends would visit my home to enjoy homemade cooking – my mum was always happy to oblige.
He taught me how to ride a bike, I taught him how to catwalk. Ever the gentleman, he brought us flowers and made us laugh till our sides ached. He continued to work with me on two more shows, gaining in confidence and chutzpah with each show. He was chosen to be the best model out of 24 in the second show.

Sonu, however, went on to win better than the best when he met Sonali in one of the shows. She was, and still is, absolutely gorgeous, and for him it was love at first sight.
Sonali was studying Mass Communications in the same University as my bestie Niti and I. Sonu would be there everyday rain or shine, wanting to meet his ladylove, and we happily got to play chaperone to the couple.
Life moved on, and so did we in different directions, with our careers and marriages. We lost touch in between and then reconnected years later on Facebook and Whatsapp. In that time I had migrated to Australia and Sonu was pursuing his acting career, going from strength to strength. I followed the trajectory of his career with great pride, watching every movie and TV appearance possible.

Sonu may not be in leading roles in every film, however his choice of roles ensures he has good screen space with his co-stars. Chedi in Dabangg, Durva Ranade Bhau in Simbaa, king in Singh is King, Kung Fu Yoga with Jackie Chan saw him in impactful roles.
A dedicated fitness freak, he endorses multiple renowned fashion and sports brands and is currently making a mark in South Indian films even learning to speak Tamil. When I found out he was coming to Melbourne we reconnected and it was like old times again. We drove around Melbourne, shopped till we dropped, ate at nondescript food courts and had a blast.

When prompted he shared anecdotes on his filmi friends, attending Deepika and Ranveer Singh’s reception, Shahrukh and Salman Khan’s playful banter about his impressive physique, turning up  at an event wearing the same designer jacket as Karan Johar, and his worldwide travels.  He confessed he loves shopping, particularly shoes – revealing he easily owns hundreds of pairs. He wanted to explore every shoe shop in Melbourne’s Bourke Street and Chadstone from Rubi Shoes to Armani.

He may have turned into a celebrity (with no less than 2.5 million followers on Insta), but he was as easy going as he was in our youth. The two days spent with him were most fun as he made us pose ‘Shahrukh style’, hugged us spontaneously, did side squats on streets and swung down escalators.
He was not fazed when we did not get a table at a local restaurant that was very busy. He happily sat with us sipping non-alcoholic drinks on the bar waiting for a table. To put it in context, this would be near impossible in India, where his fame precedes him and he gets VVIP treatment wherever he goes.
Sonali was delighted to spend quality time together without being hassled by mobs of fans or paparazzi. Both seemed to enjoy the ‘normality’ while we enjoyed their being normal.
Having said that he was equally at ease posing for selfies with people who recognised him. It was quite amusing to see how peoples’ faces lit up when they recognised him; some approached us to confirm it was ‘ Sonu Sood’, and then got into a flurry to grab their phones to record their brush with celebrity. One couple even ignored their wailing newborn in a pram to get a photo with the popular actor.
No starry hang-ups, no diva-like tantrums, Sonu Sood was a cool celebrity, down to earth and full of fun.
Sonu Sood was in Melbourne as a special guest at a Valentine’s Day meet and greet and dinner organised by Simran Sethi and Gagan Kaur under the banner of Limelite Nights Events.
PICS: Ravinder Jabbal
- Advertisement -
Share
WhatsApp
Facebook
Twitter
Linkedin
Previous articleThat old but new feeling
Next articleGoan voice